Antarctica, the world’s last true wilderness, has been protected by an international treaty for the last 60 years. But the same isn’t true for most of the ocean surrounding it.

Just 5% of the Southern Ocean is protected, leaving biodiversity hotspots exposed to threats from human activity.

The Western Antarctic Peninsula, the northernmost part of the continent and one of its most biodiverse regions, is particularly vulnerable. It faces the cumulative threats of commercial krill fishing, tourism, research infrastructure expansion and climate change.

In an article published in Nature today, we join more than 280 women in STEMM (science, technology, engineering, maths and medicine) from the global leadership initiative Homeward Bound to call for the immediate protection of the peninsula’s marine environment, through the designation of a marine protected area.

Our call comes ahead of a meeting, due in the next fortnight, of the international group responsible for establishing marine protected areas in the Southern Ocean. We urge the group to protect the region, because delays could be disastrous.

Why we must establish a marine protected area around the peninsula, right now. Video: LUMA.

Threats on the peninsula

Climate change threatens to unravel the Southern Ocean ecosystem as species superbly adapted to the cold struggle to adapt to warmer temperatures. The impacts of climate change are especially insidious on the Western Antarctic Peninsula, one of the fastest-warming places on Earth. In February, temperatures reached a record high: a balmy 20.75℃.

The peninsula is also the most-visited part of Antarctica, thanks to its easy access, dramatic beauty, awe-inspiring wildlife and rich marine ecosystems.

Tourist numbers have doubled in the past decade, increasing the risk of introducing invasive species that hitch a ride on the toursts’ gear. More than 74,000 cruise ship passengers visited last year, up from 33,000 in the 2009-10 season. 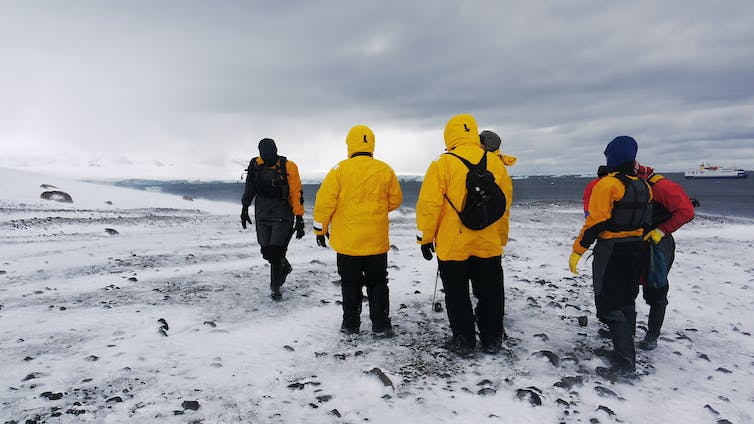 The peninsula is the most visited region in Antarctica. Shutterstock

The expansion of infrastructure to accommodate scientists and research, such as buildings, roads, fuel storage and runways, can also pose a threat, as it displaces local Antarctic biodiversity.

Eighteen nations have science facilities on the Antarctic Peninsula, the highest concentration of research stations anywhere on the continent. There are 19 permanent and 30 seasonal research bases there.

Another big threat to biodiversity in the peninsula is the commercial fishing of Antarctic krill, a small, shrimp-like crustacean which is the cornerstone of life in this region.

A cornerstone of life

Krill is a foundation of the food chain in Antarctica, with whales, fish, squid, seals and Adélie and gentoo penguins all feeding on it.

Read more: Climate change threatens Antarctic krill and the sea life that depends on it

In the past 30 years, colonies of Adélie and Chinstrap penguins on the Antarctic Peninsula have declined by more than 50% due to reduced sea ice and krill harvesting.

Commercial Antarctic krill fishing is largely for omega-3 dietary supplements and fish-meal. The fishery in the waters of the Western Antarctic Peninsula is the largest in the Southern Ocean. 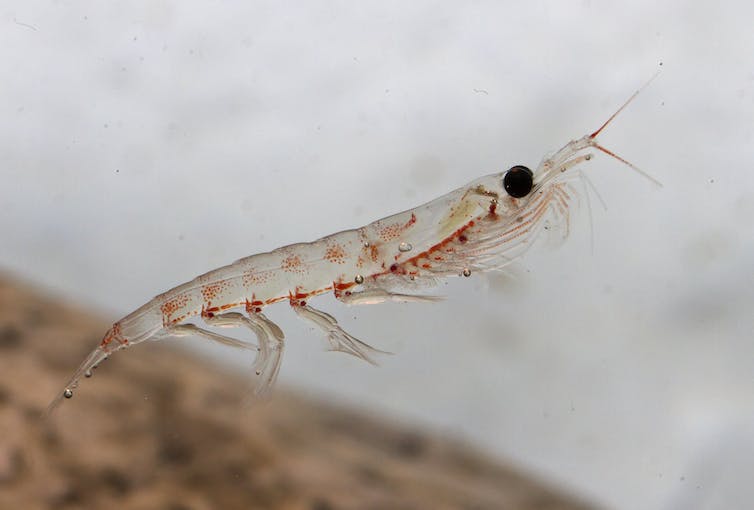 Krill is a vital part of the food web in Antarctica. Shutterstock

How do we save it?

To save the Antarctic Peninsula, one of critical steps is to protect its waters and its source of life: those tiny, but crucially important, Antarctic krill.

This can be done by establishing a marine protected area (MPA) in the region, which would limit or prohibit human activities such as commercial fishing.

Read more: Why marine protected areas are often not where they should be

An MPA around the peninsula was first proposed in 2018, covering 670,000 square kilometres. But the Commission for the Conservation of Antarctic Marine Living Resources (the organisation responsible for establishing MPAs in the Southern Ocean) has yet to reach agreement on it.

The proposed MPA is an excellent example of balancing environmental protection with commercial interests. 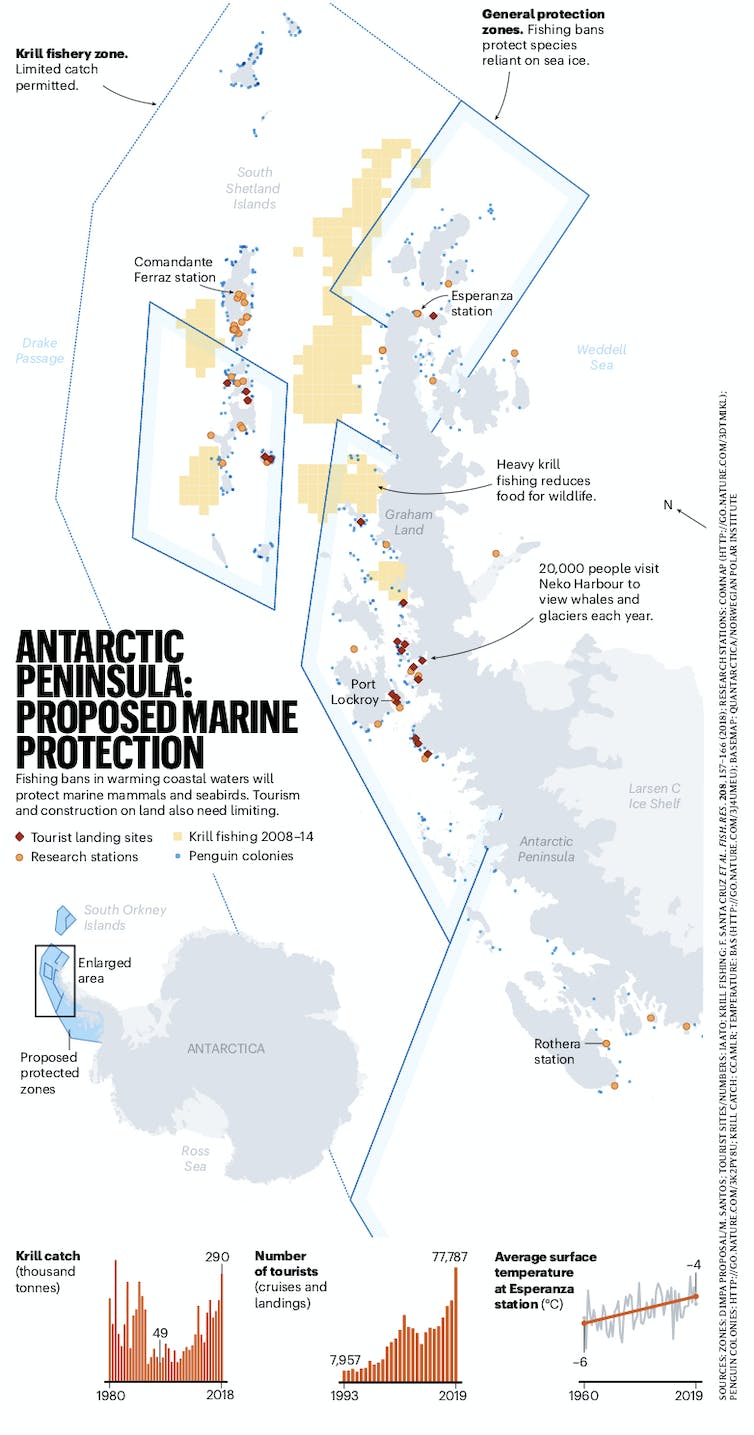 Nature 586: 496-499 22 October 2020, Author provided The area would be split into two zones. The first is a general protection zone covering 60% of the MPA, designed to protect different habitats and key wildlife and mitigate specific ecosystem threats from fishing. The second is a krill fishery zone, allowing for a precautionary management approach to commercial fishing and keeping some fishing areas open for access. The proposed MPA would stand for 70 years, with a review every decade so zones can be adjusted to preserve ecosystems. No more disastrous delays The commission is made up of 25 countries and the European Union. In its upcoming meeting, the proposed MPA will once again be considered. Two other important MPA proposals are also on the table in the East Antarctic and Weddell Sea. 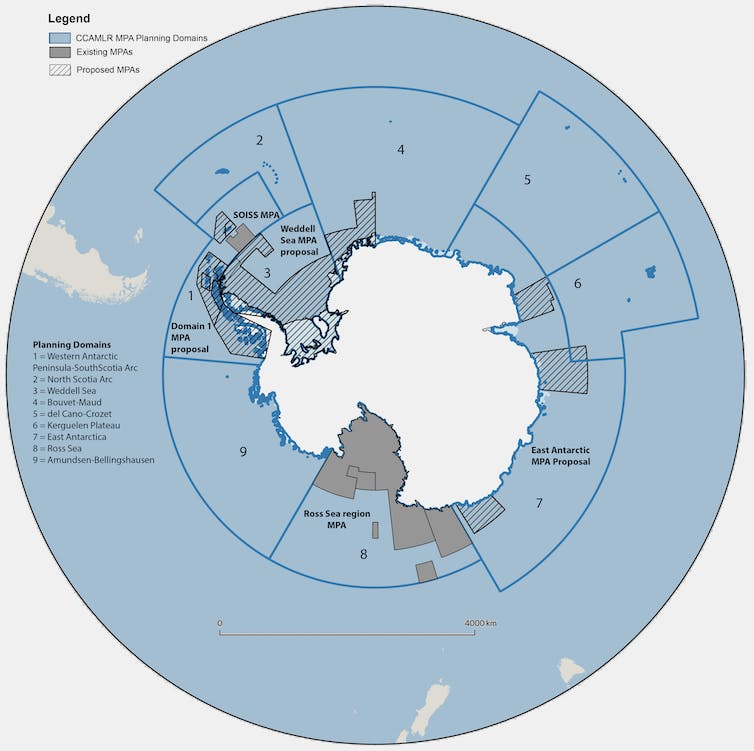 A map of the current and proposed marine protected areas under consideration. Cassandra Brooks, Author provided In fact, for eight consecutive years, the proposal for a marine park in Eastern Antarctica has failed. Delays like this are potentially disastrous for the fragile ecosystem. Protecting the peninsula is the most pressing priority due to rising threats, but the commission should adopt all three to fulfil their 2002 commitment to establishing an MPA network in Antarctica. If all three were established, then more than 3.2 million square kilometres of the Southern Ocean would be protected, giving biodiversity a fighting chance against the compounding threats of human activity in the region. Read more: Protecting ocean habitats isn't easy when industries are booming – but can they be part of the solution?