In a new series, our writers explore their best worst film. They’ll tell you what the critics got wrong – and why it’s time to give these movies another chance.

While some may know John Waters through his family friendly Hairspray (1988) – adapted into a stage musical in 2002 and back to the screen in 2007 – many know him as the Prince of Puke, the King of Bad Taste or the Pope of Trash.

Perhaps his most notorious film is the exploitation comedy Pink Flamingos (1972), the first in his “Trash Trilogy”, which also includes Female Trouble (1974) and Desperate Living (1977).

Waters’ muse Divine is Babs Johnson, the “filthiest person alive.” She lives with her mother Edie (Edith Massey), who dresses as a baby, sits in a crib and screams for eggs; her ghoulish lover Cotton (Mary Vivian Pearce); and her son Crackers (Danny Mills), who, in a particularly gruesome moment, has sex with a woman while a live chicken is crushed to death between their two bodies.

But Babs’ title of “filthiest person alive” is at stake, and she must rival Raymond (David Lochary) and Connie Marble (Mink Stole), who kidnap women, imprison and forcefully impregnate them, and sell their babies to lesbian couples.

Variety’s first review is now famous, calling it “one of the most vile, stupid and repulsive films ever made.”

It wasn’t just the critics who were unimpressed. When distributors tried to bring the film to Australia in 1976, it was banned for “indecency”. A cut version was given an R rating and released that year theatrically.

The film’s full version was eventually granted an X18+ rating, for pornographic, non-simulated sexual activity, restricting sale and hire of the film to the ACT and some regions of the NT.

In 1997, for a 25th anniversary cinematic re-release, the uncut film was again refused. The classification board said films could receive an R rating when sexual activity was “realistically simulated” – but not when it was “the real thing”. 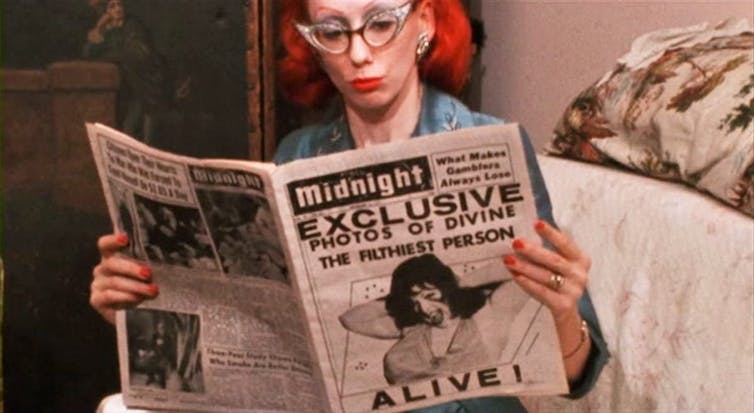 Films with unsimulated sexual activity, such as Catherine Breillat’s Romance (1999) and John Cameron Mitchell’s Shortbus (2006) have since been awarded R18+ classification, allowing the category to include them.

But the full version of Pink Flamingos maintains an X18+ rating. Even the National Film and Sound Archive’s 2017 screenings of banned films showed a cut version rated R18+.

Stupid? No: it was groundbreaking

Despite this reception, Pink Flamingos is now heralded as groundbreaking. It shaped the boundaries of bad taste and gross out humour.

There are several shocking scenes in the film. One sees Divine and Crackers break into the Marbles’ home where, after licking all the furniture, Divine fellates her son. Another sees a shot of a man flexing his prolapsed anus so it looks like it’s miming the words to “Surfin’ Bird”.

Read more: Boundary-pushing films are more than their clickbait headlines

But perhaps the most notorious is where, in the final scene, Divine eats dog faeces to the song “How Much is the Doggy in the Window?”.

Just how much can you stomach when watching something disgusting?

The characters in Pink Flamingos challenge normative ideas around sexuality, gender and family. Confronting perceptions of “good taste”, Pink Flamingos attacked an elitist culture that excluded many communities, such as queer folk and punks. 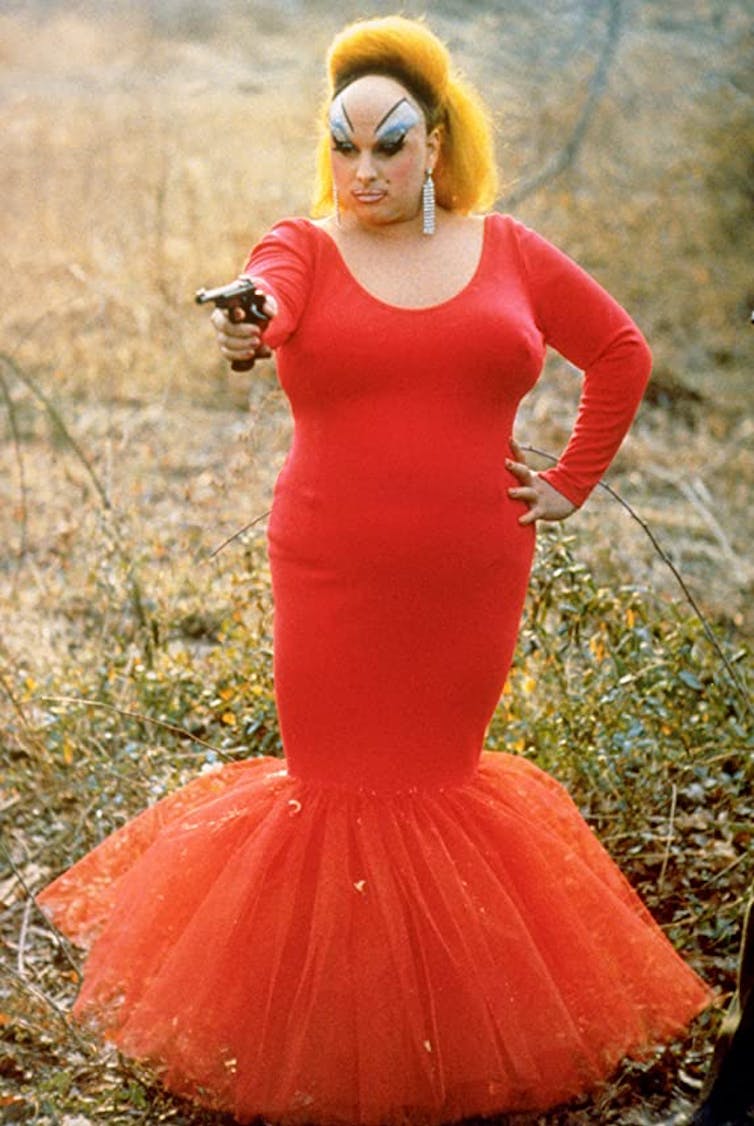 Unlike the respectable queer characters palatable to a broad audience in Love, Simon (2018) or Will & Grace (1998–2005, 2017–), Pink Flamingos allows us pleasure in others’ disgust at these mad characters.

The film draws on a queer rage that channelled the discontent many viewers felt with assimilationist politics. Babs Johnson and her family were disgusting and broke the law – and the audience loved her for it.

Pink Flamingos contributed to a camp aesthetic that is imbued in many popular queer films, such as But I’m a Cheerleader (1999) and Raspberry Reich (2004), and Waters’ rage became a key part of queer cinema, seen elsewhere in the New Queer Cinema movement of the early 90s and beyond.

In an era when films depicted queer folk as painfully banal, such as The Boys in the Band (1970), or offensive, such as Cruising (1980), Waters’ films were a funny and crude counterpoint.

They were a promise of a brighter and queerer future.

Read more: The Boys in the Band: once banned in Australia, this pre-gay liberation story is now a fond, funny Netflix remake

As I have argued elsewhere, Waters’ films do not make explicit political statements. His ideology is conveyed through humour.

Through co-opting the plastic, pink flamingo lawn ornament, Waters makes fun of middle class respectability. Before carrying out the punishment of the Marbles (for “asshole-ism”, no less), Babs Johnson proclaims:

The humour lies in the absurdity of the situation.

When Variety dubbed the film “one of the most vile, stupid and repulsive films ever made”, Waters used this on the posters promoting it. Waters wanted to offend people with Pink Flamingos – and if you can stomach to look past the offence, you will find a biting and hilarious film, as shocking and politically relevant as ever.

But in revisiting Pink Flamingos, there is one scene that still doesn’t sit right with me. The on-screen deaths of the chicken (purely for the sake of comedy) are a cruelty and grotesquery that goes beyond my own sense of good taste. Everyone has their limits.