In January, the International Court of Justice ruled unanimously that Myanmar must take all measures to prevent acts of genocide against the Rohingya minority by its military and police forces.

Since then, Amnesty International has questioned whether Myanmar has been fully transparent in its reporting on its compliance with the order. And Human Rights Watch has argued the steps Myanmar has taken so far have not gone far enough to prevent genocide.

Last month, Canada and the Netherlands gave the concerns of the international community a major boost when they announced they would intervene in the ICJ proceedings

to prevent the crime of genocide and hold those responsible to account.

Australia has maintained military, diplomatic and trade relationships with Myanmar since the ICJ case was brought against it. If Myanmar is not fully complying with the order, this puts Canberra in a tricky position.

Should Australia follow the lead of the Canadians and Dutch and use its legal weight in the ICJ to ensure Myanmar complies with its obligations under international law? 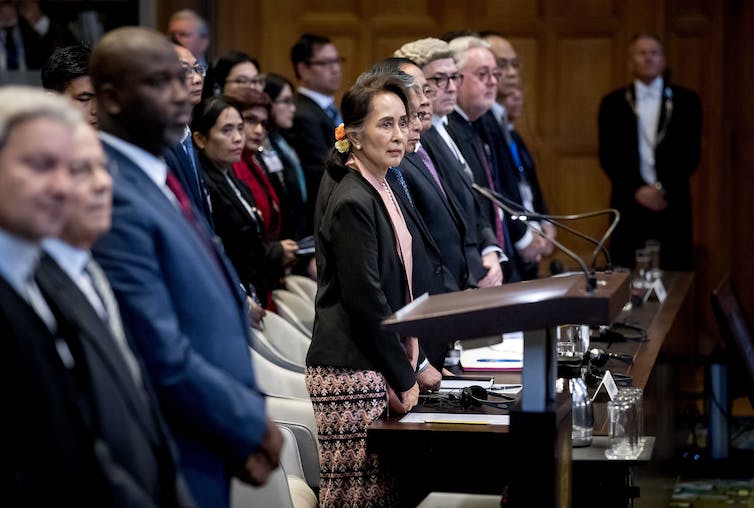 What the UN Genocide Convention says

The case against Myanmar was brought to the ICJ in November by the tiny African nation of The Gambia, alleging Myanmar had carried out mass murder and rape and destroyed the communities of the Rohingya in Rakhine state.

The UN Genocide Convention of 1948 requires states to take measures to prevent and punish the crime of genocide.

Prevention must include averting any preparation, complicity in, or commission of genocide. And punishment is reserved for those who commit genocide, as well as those who conspire to commit or incite genocide, or are complicit in the act.

This is not merely an idealistic aim but requires practical steps to be taken by states. According to German scholar Björn Schiffbauer, this means

measures of prevention need to start as early as possible, which may include taking mere measures of precaution whether or not there is any known specific genocidal danger.

Myanmar, which is a party to the Genocide Convention, was effectively put on notice by a UN fact-finding mission in 2018, which collected extensive evidence of acts committed by the armed forces (known as the Tatmadaw) against the Rohingya, including

the killing thousands of Rohingya civilians, as well as forced disappearances, mass rape and the burning of hundreds of villages.

Has Myanmar abided by the ICJ order?

In May, Myanmar submitted its first report to the ICJ on its compliance with the order to prevent genocidal acts against the Rohingya, ensure the military and police do not commit genocide, and preserve any evidence of previous genocidal acts.

This report has not been publicly released, but news outlets have suggested it was based on directives issued by Myanmar President Win Myint’s office in April.

Read more: Why Aung San Suu Kyi is in The Hague defending Myanmar against allegations of genocide

According to Human Rights Watch, the directives are not enough to protect the Rohingya, particularly as they only appear to focus on the armed forces. A careful read also shows none of the directives appear to refer to preventing complicity.

In international law, both complicity and conspiracy can involve the commands and conduct of a range of actors, including political and military leaders, as well as third-party groups under their control or influence.

Amnesty believes Myanmar is in breach of the ICJ order. This ought to cause the Australian government severe concern, particularly as Australia has maintained trade and military ties with Myanmar.

Australia has placed sanctions and travel bans on five generals named in the UN fact-finding report, but not the commander in chief, General Min Aung Hlaing.

Australia also has an arms embargo in place for Myanmar. However, it has not placed sanctions on some Tatmadaw-controlled or foreign-owned companies that do business in or with Myanmar.

This was recommended by the UN fact-finding mission on its sanctions list. 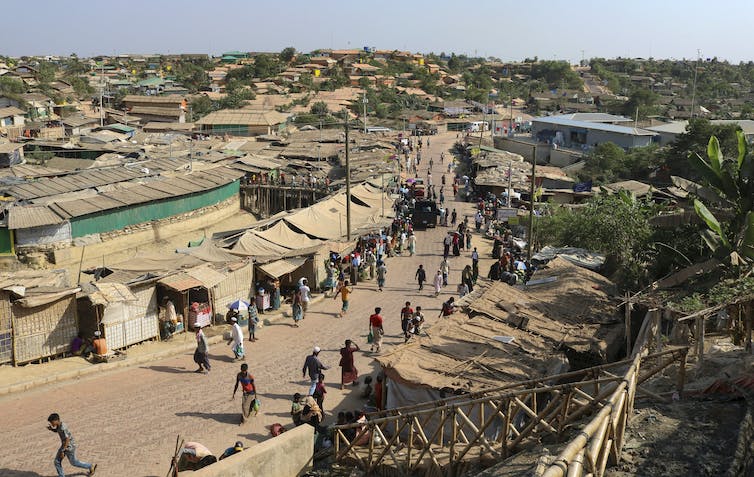 What Australia should be doing

When Canada and the Netherlands indicated their intention to intervene in the case against Myanmar, they said they specifically wanted to provide assistance to the ICJ

with the complex legal issues that are expected to arise and … pay special attention to crimes related to sexual and gender-based violence, including rape.

Australia could assist in a similar way, particularly with regard to interpreting how the duty to prevent genocide works under international law. This could include whether states or foreign individuals would be considered complicit by maintaining trade or military ties with Myanmar.

These legal questions should also compel Australia to give serious consideration to checking its relationship with Myanmar.

In January, Min Aung Hlaing received the Australian ambassador, Andrea Faulkner, for a diplomatic visit, during which they exchanged gifts and discussed various topics. This included the provisional measures decided by the ICJ, according to a press release.

But the statement also stressed the “improved relations between Myanmar and Australia”, including cooperation between their armed forces.

Read more: Myanmar might finally be held accountable for genocide, but the court case must recognise sexual violence

However, it could be argued providing support in the form of military aid and the benefits of trade could compromise Australia’s duty to use all reasonable means to prevent genocide in Myanmar — if this encourages or assists those who should be held accountable for past crimes.

This is supported by the ICJ’s 2007 decision in Bosnia’s genocide case brought against Serbia.

Australia’s current position is a concern. It could be improved greatly by joining the ICJ proceedings to clarify where the duty to prevent genocide ends and complicity begins, and how to ensure that Myanmar complies with the court orders.