After a summer of relative freedom of movement, autumn has brought a major spike in COVID-19 cases in many European countries. While the European Union fruitlessly searches for a united way forward across its various jurisdictions, national and regional initiatives are trying to solve the conundrum of how to contain and reverse the spread of the virus without having a significant impact on the economy.

Europe is not alone in its suffering - much of the northern hemisphere is dealing with spiralling infection rates as the autumn turns to a long winter. In the United Kingdom, Prime Minister Boris Johnson has announced a month-long lockdown as cases pass the 1 million mark; in the United States, a third wave of COVID is well underway, with the country recording a grim record of 100,000 new cases in a single day.

As France’s President Emmanuel Macron has admitted, the virus has spread through Europe “at a speed that even the most pessimistic predictions didn’t foresee”.

He has branded his new lockdown proposals a “brutal” brake on the virus, but compared with the determined measures undertaken in Victoria, it is a half-measure that stands little chance of eradicating or even suppressing the virus. Schools, shops and many businesses outside the hospitality and entertainment sector will remain open; so too will nursing homes. Travel to and from work will continue and exercise within 1 kilometre of home for up to an hour will also be permitted.

Given the fractious tone of contemporary politics and society in France, this is probably as far as Macron can go. Whether the French public, already deeply divided, will accept the measures is uncertain.

Should it fall to police to force compliance in the absence of goodwill, protests will quickly sprout, as they have in the Czech Republic, where far-right elements presenting themselves as anti-mask protesters have clashed with police on the streets of Prague.

Germany, which had until recently been spared the higher infection rates of its neighbours, is now also heading on the same trajectory. Chancellor Angela Merkel has warned Germans the exponential growth of infections has left governments no choice but to implement dampening measures to begin on November 2. 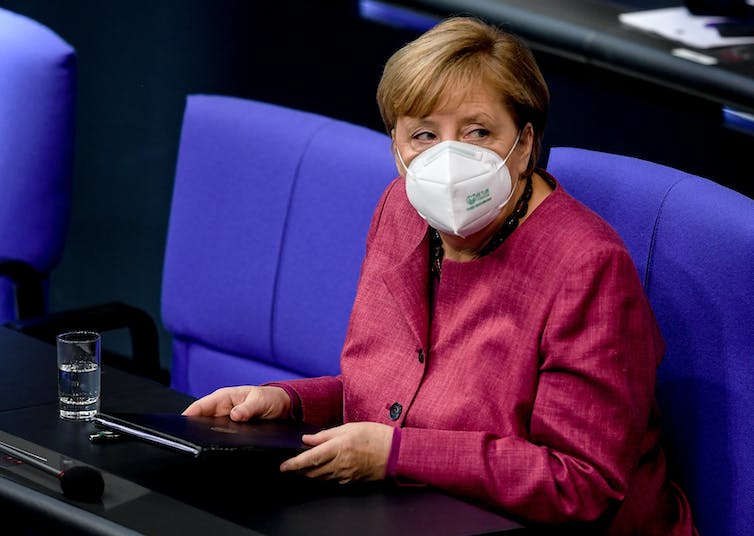 Described as a “soft lockdown”, these measures, like those proposed in France by Macron, ban visits to bars, restaurants, clubs and pubs, but allow schools, shops and places of worship to stay open.

Candidly, Merkel has confessed she would have preferred to have undertaken these measures a fortnight ago, but felt they were simply politically unacceptable then. To her mind, the lag was not ideal. “That’s politics,” she admitted.

Her pessimism might be well founded. Many in Germany’s hospitality and entertainment industries already feel that, while much of society remains open, they have been made to play the part of the sacrificial lamb.

On the noisy margins, Germany’s Qanon-adjacent Querdenker movement insists any measure to stop people dying from COVID constitutes an egregious limitation to their personal liberty.

In typically opportunistic fashion, the right-wing populist party Alternative for Germany (AfD) has also heckled Merkel as she brought the measures before the Bundestag.

The party refused to support Merkel’s argument that it is only through “reason and social solidarity” that the virus can be brought back under control. Instead, like populist right-wing elements the world over, they implausibly argue Merkel is implementing a “corona dictatorship”. 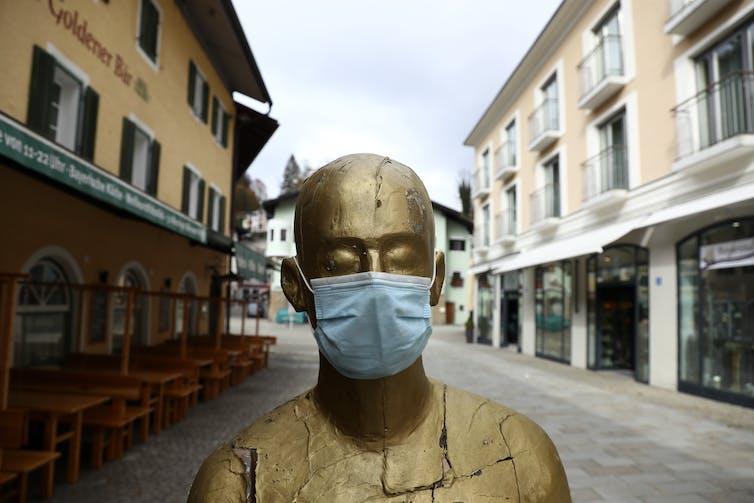 Many in Germany’s hospitality industry feel aggrieved at being forced to shut down while other parts of society remain open. AAP/EPA/Mattias Schrader

With the entire European project predicated on freedom of movement – something accentuated in the debates over Brexit, the Australian approach of simply closing Europe’s internal borders, or even regional borders, has not generally been embraced.

Only Spain has moved rapidly in this direction, halting domestic travel as part of its extension of “state of alarm” measures. Here too, such measures have been met with protests.

As the state most committed to freedom of movement across the European Union, Germany has explicitly warned against such restrictions. Merkel told the EU:

…it is especially important for Germany as a country in the middle of Europe that the borders stay open, that there is a functioning economic circulation and that we fight the pandemic together.

However, it is unlikely the EU can or will move as one on border lockdowns, or indeed any other COVID measure.

The question of mobility is a vexed one for the EU and one where history is more deceptive than illuminating. The Spanish flu model, that many are using to understand the current phases of the pandemic, is not appropriate. Spanish flu was in part accelerated by the global movement of people accompanying demobilisation at the end of the first world war. Unlike then, a “return to normal” today does not mean a return to a condition of global immobility. Now, particularly in Europe, a return to normal means a return to hyper-mobility.

Read more: Europe's second wave is worse than the first. What went so wrong, and what can it learn from countries like Vietnam?

In the absence of a vaccine, how societies respond to both the virus and governments’ attempts to mitigate its effects will matter greatly. As elsewhere, in Europe the pandemic has tested the strength of social solidarity. If there is a strong social conviction that the health of the individual is best protected by preserving the health of all, then governments merely have to offer a set of guidelines on how to put this instinct into practice.

This was to some extent the experience of the first set of lockdowns in the European spring. This time, however, the libertarian far right is far more organised. They see any limitation to personal freedom to ensure community safety as intolerable tyranny. Compounding this is the fact many Europeans are wary of their governments’ poor track records in fostering meaningful social cohesion.

Without community acceptance of government initiatives, the question shifts from organising communities’ desire to protect their vulnerable members to one of police-led enforcement. It is potentially a blunt and alienating approach that erodes whatever goodwill remains.

Europe’s coming winter will test not only the resilience of its health system, but the strength of its social fabric.