For most people, running a marathon sounds like a lot of work — and they probably wouldn’t even consider completing more than one within 24 hours.

The will to go the extra mile is what lies at the very heart of ultra-endurance events (and that’s exactly why they’re called “ultra”).

These events are for athletes who go beyond the typical marathon distance of about 42km, or engage in physical exertion for more than six hours. They’re generally performed via biking, swimming or running, but can also be held in activities such as kayaking.

Our new research published in the journal PLOS One looks at the role of “mental toughness” in the performance of ultra-endurance runners. Our findings suggest mind over matter is a real phenomenon — but can only get you so far.

The nitty-gritty of ultra-endurance events

Read more: I ran 100 miles in a day – this is what happened to my body

Unsurprisingly, research on ultra-marathon runners has found this unique population experiences a range of difficult circumstances during these events. 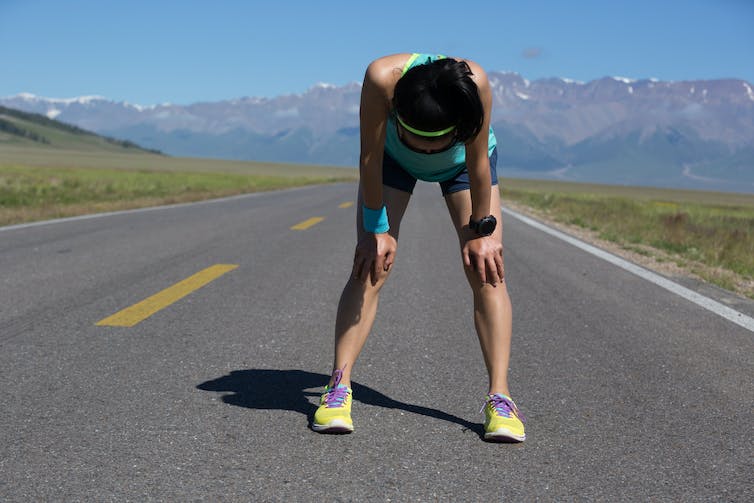 Is it really mind over matter?

“Mental toughness” is usually associated with the ability to either remain consistent in the face of challenges, or to quickly recover from setbacks and adversity.

We wanted to investigate what motivates ultra-endurance athletes to keep going despite obvious physical and mental challenges. To do this, we focused on a group of 56 ultra-marathon runners who competed in the Hawaiian Ultra Running Trail 100, or HURT100.

This 160.1km endurance run is a difficult five-lap course in the mountains above the city of Honolulu, Hawaii. The track has little clear running space and runners spend most of the course navigating through tree roots and crossing streams. Topping it off is about 7,500m of cumulative elevation gain and loss over the course.

The elite athletes in our study completed two questionnaires, from which we found mental toughness didn’t seem to predict performance within the group.

Thus, we conclude there may be a “threshold” level of mental toughness one must overcome to even be able to prepare for, and compete in, such an event. But beyond this, other psychological, physical and logistical factors appear to have a greater impact on performance.

We also compared our group of ultra-marathon runners to athletes in other sports including hockey, tennis, professional football, high performance male athletics and mixed martial arts. We discovered the runners had significantly higher levels of mental toughness.

In terms of which specific characteristics led to greater mental toughness, such as confidence, commitment, personal responsibility or control over one’s thoughts — “self-efficacy” scored high.

This refers to an athlete’s belief in their ability to execute a task. For example, whether they believed they could complete the HURT100 distance within the 36-hour cut off time.

Read more: Will the genetic screening of athletes change sport as we know it?

Our research has practical implications for athletes, whether they want to increase their own mental toughness, or know what it takes to run in an ultra-marathon event.

Having advanced knowledge of the mechanisms underpinning mental toughness (such as self-efficacy) could also help sport psychologists and coaches create more effective and targeted training programs.

That said, our findings do open doors to more questions. What other factors could predict performance in ultra-marathon runners? How wide is the range of characteristics that can be linked to mental toughness? And can these be learned by anyone?

Some may argue people are just born with greater levels of mental toughness and it’s in their genes. Others claim this can be developed over time as a result of individual experiences. It seems the age-old nature versus nurture debate persists.

Acknowledgement: the author would like to acknowledge the study’s first author, Anthony Brace, who is a Master of Psychology Candidate (Sport and Exercise) at the University of Queensland.