Every month, we ask The Conversation authors what happened after we published their articles. Here are some of their stories from October 2020.

The Conversation’s journalism gets politicians and industry leaders talking

Every month, we ask The Conversation authors what happened after we published their articles. Here are some of their stories from October 2020.

The Conversation’s journalism gets politicians and industry leaders talking

On UniSuper’s post-budget podcast, their Policy & Advocacy Manager, Benedict Davies, recapped the budget and said the best news summary he’d seen of the budget was from Peter Martin on The Conversation. They linked to The Conversation in their show notes.

After La Trobe University’s Clare Wright wrote We have enough electorates named after dead white men. It’s time we chose a woman instead, federal Labor MP Tim Watts started a campaign to rename his electoral seat of Gellibrand to Kirner after the late Victorian Premier. Clare also filed a petition on the matter, along with other prominent female academics and community leaders, which was reported in the Sydney Morning Herald.

After La Trobe University’s Stanley Shanapinda wrote Apple releases fast 5G iPhones, but not for Australia. And we’re lagging behind in getting there, he was contacted by Vodafone Australia for a Zoom meeting with their RAN Strategist about the telco industry. He was also interviewed on ABC Radio Sydney’s Focus program. The article has been read 37,000 times to date.

Leading the public discussion on the pandemic and public health

After the Burnet Institute’s Michael Toole wrote Of all the places that have seen off a second coronavirus wave, only Vietnam and Hong Kong have done as well as Victorians, the article was read 74,000 times, shared 4,400 times to Facebook, quoted on the BBC news website, and Nobel Prize-winning medical researcher Professor Peter Doherty and 774 ABC Melbourne Radio host Rafael Epstein tweeted it:

After AHRMI’s Michael Musker wrote about post-viral fatigue syndrome and COVID-19 patients, he was contacted by a reader with myalgic encephalomyelitis/chronic fatigue syndrome (ME/CFS), who wrote a very moving email: “Thank you for your knowledgeable, understanding & empathetic article regarding CFS/ME and post-Covid. It’s the best article I’ve read in a long time… There are a few post-Covid patients that have joined ME/CFS groups and it’s heartbreaking. Nowhere to go, they don’t know what to do. And we, who have been sick for decades can only advise with doctors that we know of…” The article has reached more than 103,000 readers.

The hotel quarantine inquiry also revealed that Victoria’s Chief Health Officer Professor Brett Sutton is a regular reader of The Conversation as a source of expert news and analysis.

After Queensland University of Technology’s Samantha Prime and University of Newcastle’s Christie M. Gardiner co-wrote Specialist referral rules haven’t changed much since the 70s, but Australia’s health needs sure have, they were interviewed on ABC Radio Sydney Afternoons, ABC Radio Australia-wide and Radio 2CC Canberra. Samantha was also interviewed on 6PR Radio Perth along with Alison Verhoeven, CEO of the Australian Healthcare and Hospitals Association, who published the recent Deeble Institute for Health Policy Research Issue Brief that underpinned Samantha’s article.

Christie was invited to discuss her research with the Australian Medical Association, and the pair had productive engagement with The Royal Australian College of General Practitioners (RACGP). Consumers Health Forum issued a statement in support and are drawing on the research to write to the Health Minister on possible reforms. The authors also engaged with GPs, specialists and health consumers on the issue.

“The Conversation lived up to its name!” Prime wrote.

Making waves in the art world

After University of Wollongong’s Vanessa Cavanagh wrote the Friday essay: this grandmother tree connects me to Country. I cried when I saw her burned, she was approached by the Monash University Museum of Art with an invitation to further develop her story for inclusion in their upcoming Tree Story publication set (an exhibition, book and podcast).

Australian National University’s Christine Judith Nicholls has been invited to write chapters in three books based on her articles for The Conversation. After she wrote Friday Essay: land, kinship and ownership of ‘Dreamings’, Australian Catholic University, which owns artist Paddy Japaljarri Sims’s Star Dreaming (pictured below), asked her to write about that work for a large hard-copy visual art book on the ACU’s extensive art collection. Her chapter was included in ACU Art Collection : A new perspective, which was also published online. 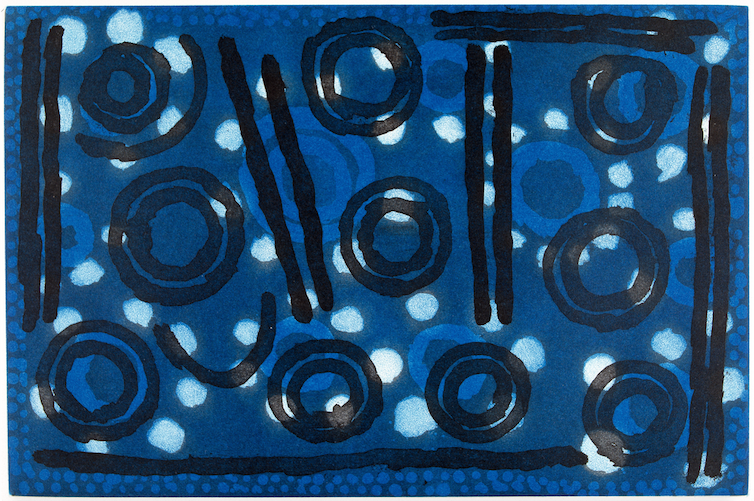 After Christine wrote ‘Dreamings’ and place – Aboriginal monsters and their meanings, she was contacted by Bloomsbury UK and USA and published a chapter in Monster Anthropology: Ethnographic Explorations of Transforming Social Worlds through Monsters.

Since then, the University of Amsterdam has contacted Christine and she is writing another article about monsters for a volume they’ll be publishing early next year.

Showcasing the knowledge and concerns of Indigenous communities

After Charles Sturt University’s Dominic O’Sullivan wrote Can colonialism be reversed? The UN’s Declaration on the Rights of Indigenous Peoples provides some answers, he gave a 25 minute interview on ELMNT FM, a First Nations’ radio station in Toronto and Ottawa.

After Griffith University’s Paul S.C.Taçon and Sally K. May wrote Introducing the Maliwawa Figures: a previously undescribed rock art style found in Western Arnhem Land, the article was republished in 10 other media outlets including The Guardian, and they were contacted for a number of newspaper and radio interviews including BBC and ABC Radio. The article was also referenced in Smithsonian Magazine, the official journal published by the Smithsonian Institution in Washington, D.C.

After Griffith University’s Morgan Disspain and Lynley Wallis co-wrote School of fish: how we involved Indigenous students in our investigation of a 65,000-year-old site, they were interviewed on the ABC Weekend Breakfast television show, ARC Darwin radio and NITV.

Making headlines outside of Australia and New Zealand

After Griffith University’s Tess Newton Cain wrote New Caledonians will vote again on independence. Will the answer this time be ‘Oui’?, she was interviewed on ABC TV News, SBS TV News and BBC World Service. The article was translated into French and republished by The Conversation France.

After Australian Catholic University’s Jonathan Zecher wrote Acedia: the lost name for the emotion we’re all feeling right now, the article had a glowing reference in a CNN op-ed and many social media shares (174,000+ shares to Facebook from The Conversation website alone). It was one of our most-read article on-site and via republication, with 95% of readers outside Australia. Jonathan was interviewed on ABC Radio Soul Search, Chicago AM 560 and Columbia University’s Earth Institute podcast.

Jonathan wrote to his editor, Lucy Beaumont: “I’ve been watching with shock and delight, to see how this struck a chord. Thanks so much for your excellent and careful editing.” 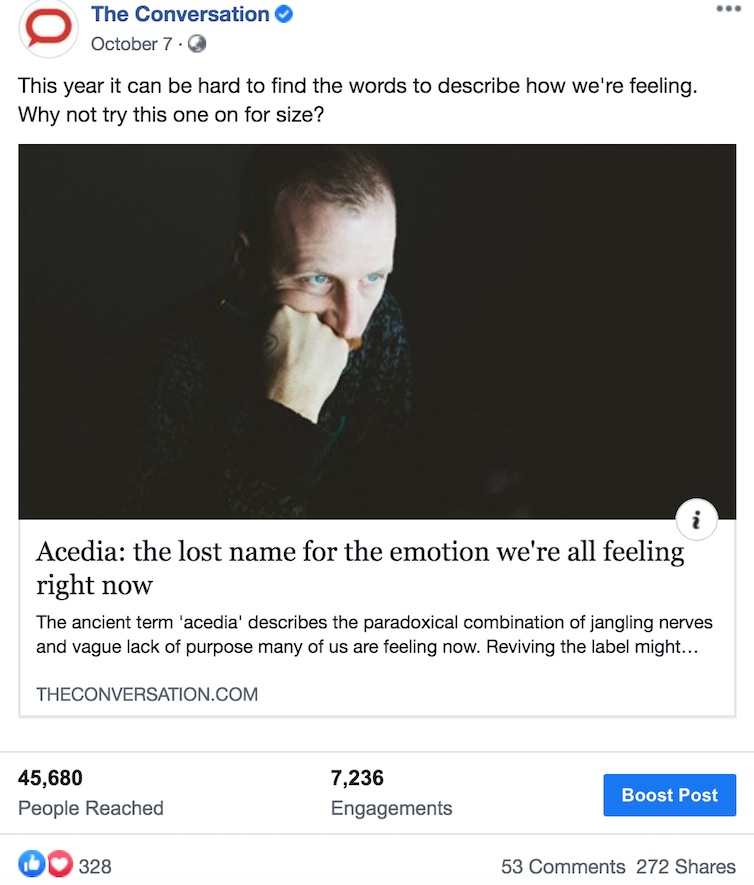 After Curtin University’s Diana Bogueva and Dora Marinova wrote Which ‘milk’ is better for the environment?, the article was a hit on The Conversation’s social media. The Conversation’s Instagram post featuring the article had more than 20,537 impressions. The Facebook post reached 109,155. The article has been read 61,300 times so far, with 63% of readers outside Australia. It has been republished by 15 other media outlets including IFLScience, Science Alert, 1MillionWomen and Sciblogs. Diana and Dora were approached for interviews on ABC Drive, RTRFM, SBS radio (both Russian and Bulgarian programs). Dora said, “This is a very important topic and the invitation to contribute to The Conversation was very timely. You are doing an excellent job! Special thanks also to editor Anthea who was so professional and helpful!” After University of Auckland’s Jennifer Curtin wrote NZ election 2020: as the ultimate political survivor, Judith Collins prepares for her ultimate test, she was interviewed by BBC World, BBC London, and a Dutch station. Injecting academic expertise into the media landscape After UNSW’s Katharine Kemp wrote The US is taking on Google in a huge antitrust case. It could change the face of online search, she was interviewed on Channel 7’s Sunrise. The article was republished by 16 other news outlets including ABC and Channel News Asia and read more than 62K times. After Monash University’s Kate Fitz-Gibbon and Silke Myer, and University of Liverpool’s Sandra Walklate co-wrote Australia is not ready to criminalise coercive control — here’s why, Silke did three radio interviews including on ABC Radio, had conversations with advocates around the current conversation related to criminalising coercive control, and was contacted by other academics sharing similar concerns. After Te Herenga Waka — Victoria University of Wellington’s Mike Joy wrote New Zealand government ignores expert advice in its plan to improve water quality in rivers and lakes, the editor of Marine and Freshwater Research invited him to write a perspectives paper based on the article. After the University of Melbourne’s Denis Muller wrote Paper chase: why Kevin Rudd’s call for a royal commission into News Corp may lead nowhere, he was approached for a number of television, radio and print interviews including Channel 9’s Today Show, RMIT TV, ABC Radio Victoria, ABC Radio Alice Springs, The New Daily and Radio 3CR.