The “team of rivals” was the term historian Doris Kearns Goodwin used to describe US President Abraham Lincoln’s cabinet. It included three men who had run against Lincoln for the Republican nomination for president in 1860: William Seward (secretary of state), Salmon Chase (treasury secretary) and Edward Bates (attorney general).

Appointing these strong-willed figures could have been disastrous were it not for Lincoln’s personal qualities.

Goodwin describes how Lincoln was willing to acknowledge when policies failed and change direction. He gathered facts on which to base decisions. He sought compromise but took full responsibility for his decisions, respected his colleagues and set an example of dignity. (In all these, he sounds like the antithesis of Donald Trump.)

President-elect Joe Biden has taken a different approach to filling out his cabinet so far. Aside from choosing Kamala Harris as his vice president, he’s looked past his main Democratic rivals for the nomination — Elizabeth Warren, Bernie Sanders — and appointed mainly technical experts with relevant experience and an international outlook.

Biden may have seen these more technocratic appointments as fitting with his less partisan style. It also sends a signal to the world that the US wants to reengage.

In Biden’s words, the US is “ready to lead the world, not retreat from it”. And as Linda Thomas-Greenfield, the new UN ambassador put it, “multilateralism is back”. 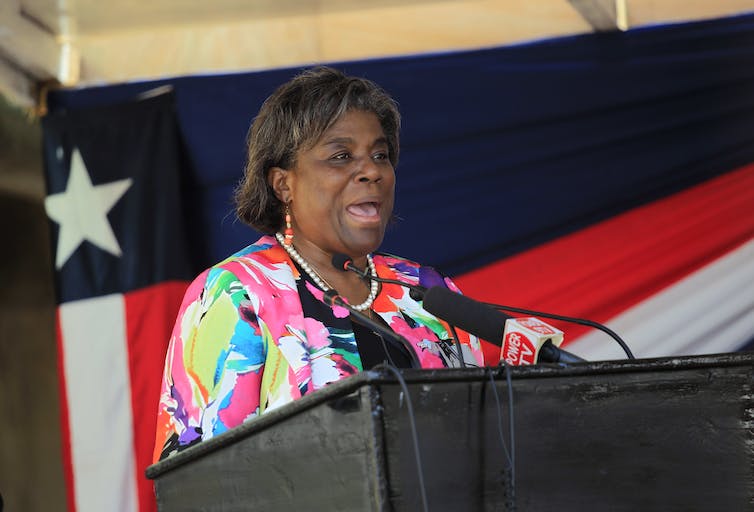 Linda Thomas-Greenfield is a career diplomat and former ambassador to Liberia. AHMED JALLANZO/EPA

Biden may not have filled his cabinet with rivals, but he has also not surrounded himself with clones or an “echo chamber”. He made clear he wanted his cabinet to

tell me what I need to know, not what I want to know.

Read more: From 'America first' to 'America together': who is Antony Blinken, Biden's pick for secretary of state?

He once made a charming appearance on Sesame Street, telling Grover about the United Nations and refugees. He commented

we all have something to learn and gain from one another even when it doesn’t seem at first like we have much in common.

The message is a long way from “America first” and the disdain for the rest of the world shown by the Trump administration.

As treasury secretary, Biden has appointed Janet Yellen. She was chair of the Federal Reserve from 2014–18 and currently heads the American Economic Association. Nobel laureate Joseph Stiglitz recalled her as one of his brightest students.

It is quite an achievement to be the most famous economist in a family that includes a Nobel Prize winner (her husband George Akerlof). 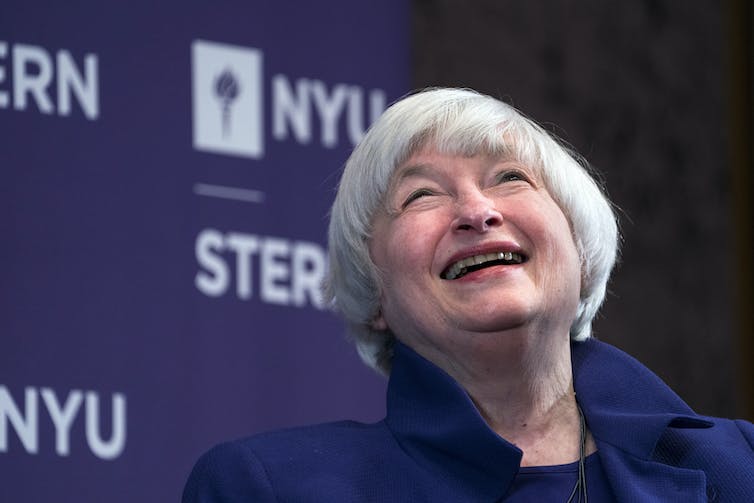 An advocate of free trade and expert in labour markets, she understands the damage that Trump’s trade wars, especially with China, have done to working Americans.

Being chair of the Federal Reserve also gave Yellen an important role in international organisations, such as the Bank for International Settlements.

John Kerry has been appointed to the new post of climate envoy. He is globally respected as a former secretary of state, and ran unsuccessfully for president himself in 2004.

His appointment signals that the Biden administration recognises the importance of recommitting the US to climate action. Most significantly, Kerry was highly influential in the final week of negotiations of the Paris Agreement in 2015 and signed it for the US the following year with his granddaughter on his lap. 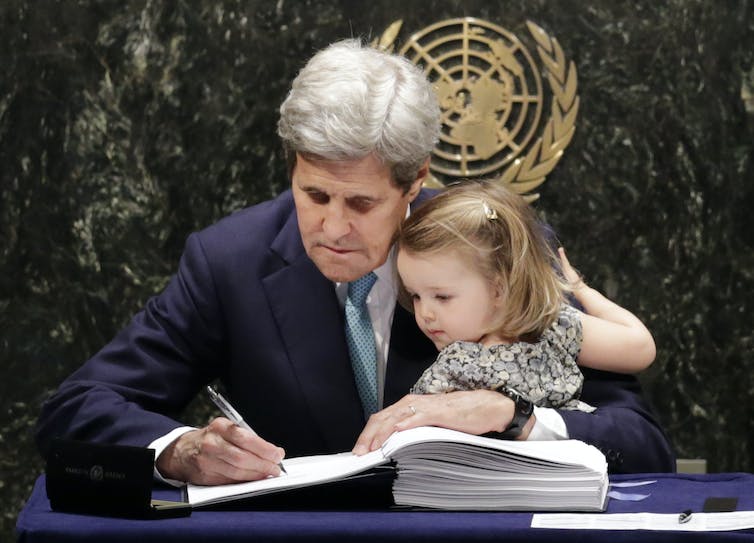 Kerry was personally involved in pushing the Paris Climate Agreement over the line. Mark Lennihan/AP

And following four years of Trump’s anti-immigration policies, Biden has selected a Cuban-born immigrant, Alejandro Mayorkas, to lead the Department of Homeland Security. After his nomination, Mayorkas spoke of his desire

to advance our proud history as a country of welcome.

Potential roadblocks in the Senate

Read more: What a Biden presidency means for world trade and allies like Australia

But there’s one significant hurdle still looming. If the Democrats can’t gain control of the Senate by winning the two run-off elections in Georgia in early January, the Republican-led chamber will likely aim to block Biden’s aims of resuming a constructive global role.

For example, Biden will be able to issue an executive order to rejoin the Paris Agreement on his first day as president. But major reforms to cut greenhouse gas emissions or his proposed $2 trillion clean energy plan would face opposition in a Republican-controlled Senate. 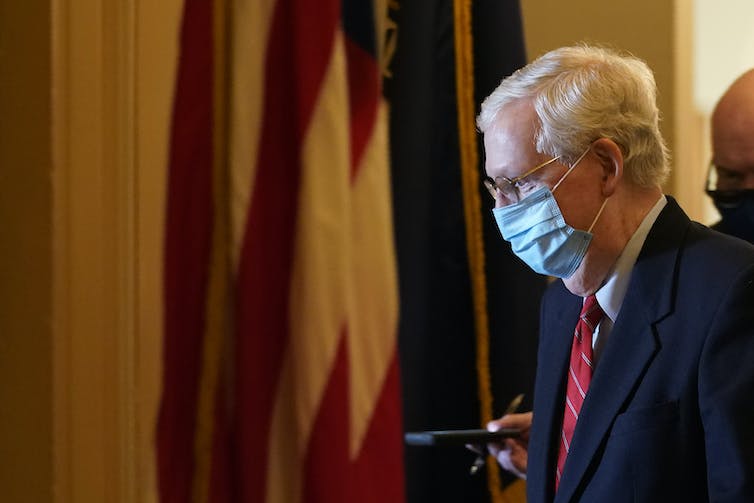 Senate majority leader Mitch McConnell once described Biden as a ‘trusted partner’, but it remains to be seen how well the Republicans will work with the new administration. Susan Walsh/AP

Optimists have compared Biden to former President Lyndon Johnson (also known as LBJ), who may be able to use his decades of legislative experience to achieve more change than was possible for John F. Kennedy or Obama.

Ron Klain, recently announced as Biden’s chief of staff, once put it well:

LBJ might not have been the wokest, coolest, hippest Democrat, but he’s the person who got the most actual progressive social justice legislation done since FDR […] he knew how to make the Senate work.

The rest of the world will hope Klain is right and that the Senate does not block the program of this promising new cabinet.

Read more: Winning the presidency won't be enough: Biden needs the Senate too