Review: Oliver Sacks: His Own Life, directed by Ric Burns

Apropos of nothing but a bowl of jello placed before him, a stifled laugh escapes from Oliver Sacks, the famed neurologist, writer and public intellectual.

“What are you thinking about?” asks a voice offscreen.

Sacks demurs at first — or perhaps feigns reluctance — then relents.

Until a few years ago, I would wake up at night with an erection. Nothing to do with sexual excitement … But it was at times irritatingly persistent. So, I would sometimes cool my turgid penis in orange jello.

Such vignettes from Oliver Sacks: His Own Life reveal the usually shy, but often cheeky and sometimes shockingly honest character of the late Sacks.

Shortly after receiving a fatal diagnosis in January, 2015, Sacks invited documentarian Ric Burns and crew for a series of interviews in his New York City apartment. Sacks’ second memoir, On the Move, would be published in April. He passed away just a few months later.

Read more: 'I want to stare death in the eye': why dying inspires so many writers and artists

‘Immoderate in all directions’

The film is structured around Sacks reading brief passages from his memoir, accompanied by archival footage of the avuncular physician in action. Also interspersed are pithy recollections from fellow neurologists, writers, editors, patients, family and friends.

Oliver Sacks reminded us to ‘treat the person and not the disease’.

Rather than retreading previous thoughts on Sacks’ style of “romantic science”, it’s worth considering what the documentary offers that existing memoirs, biographies and other accounts do not.

Firstly, for those unfamiliar with Sacks, the film provides the most efficient but palatable — jello anecdotes aside — summary of his life, work and character.

Moreover, it reconciles how Sacks’ seemingly wild contradictions would (eventually) become complements. A recurring theme is that Sacks was “immoderate in all directions”, living a life that whiplashed between extremes of hedonism and self-discipline.

Sacks possessed a curious mix of extraordinary erudition, voracious appetite and self-destructive tendencies. This was leavened by seemingly boundless empathy for the neurologically marginalised, for whom he so poetically advocated.

By all accounts, including those of his partner Bill Hayes, Sacks could be painfully shy, yet effusively gregarious when taken by “sudden, ebullient outbursts of boyish enthusiasm”.

As a young man wracked with anguish regarding his sexuality and unrequited affections, Sacks once resolved never to live with anyone again. So began 35 years of celibacy, when Sacks took on an almost monastic dedication to his work. 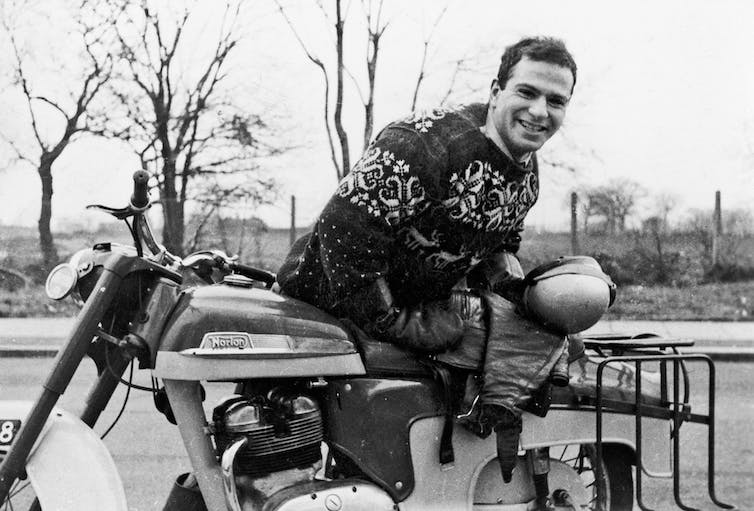 A need for speed. A handsome young Sacks with his beloved motorbike. Madman

However, Sacks first turned to drugs “as a sort of compensation”, acquiring a fierce amphetamine habit that proved inspiring and corrosive.

Yet Sacks also sought mastery over his body, becoming an exceptional weightlifter.

Oscillating between roles as “Dr Squat” the athlete, “Wolf” the speedfreak biker, and “Ollie” the kindly but unconventional neurologist, Sacks often remained ill at ease.

Perhaps only in his very late years, through his relationship with Hayes — including a very late discovery of French kissing on his 76th birthday — did Sacks find comfort.

Born into a “typical, Orthodox Jewish, middle-class family” during the 1930s, Sacks’ father, Sam, was an affable GP, while his mother, Elsie, was a highly regarded gynaecologist, and among the first women surgeons in England.

Sacks reports an “an uneasy closeness” with his mother.

I think she wanted me to be like her. Sometimes, especially when I was very young … she would bring a fetus home, and suggest I dissect it. That was not so easy for a child of ten or eleven.

Later, upon discovering Oliver was gay, his mother declared him an “abomination”. Though they remained close, Sacks lamented that “her words haunted me for much of my life”. 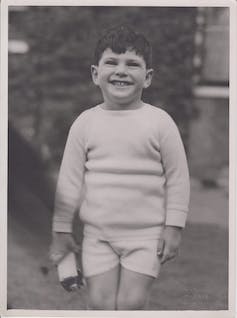 When she found out he was gay, Sacks’ mother called him ‘an abomination’. Supplied

Sacks and his brother Michael were sent to boarding school during the Battle of Britain. Soon after this harrowing experience Michael was diagnosed with schizophrenia. Sacks became both “terrified of him, terrified for him” and retreated into a fondness for chemistry.

Only after many years could Sacks work his way back towards contemplating the minds of others.

Famously clumsy, Sacks initially aspired to be a lab scientist, but after numerous calamities was instructed to “Get out, see patients, you’ll do less harm”.

His vocational approach as a neurologist often more resembled a naturalist than a clinician. For Sacks, observation and play trumped diagnosis and prescription.

Indeed, in a biography by Lawrence Weschler, Sacks notes his “main neurological tool is the ball … You can learn much from how patients play”.

‘I’m very interested in how people adapt to extremes.’ Oliver Sacks in 1996.

To compress any life — let alone one as Forrest Gumpian as Sacks’ — into a two hour film is something of a fool’s errand.

Similarly, perhaps in deference to a subject granting privileged access during his last days, the documentary veers ever so slightly into hagiography, framing Sacks as a unifying figure between the clinical and experimental neurosciences.

Still, Sacks’ influence is undeniably staggering, and His Own Life provides a compelling account of the empathetic labours needed for otherwise lost souls to be “storied into the world”.

Oliver Sacks: His Own Life is in cinemas now.