History has been brought to the forefront in 2020. We have witnessed not only a once-in-a-century pandemic, but also a global protest movement for racial justice following the death of a Black man, George Floyd.

Such protests have happened before, but not with this immediacy or level of intensity. The Black Lives Matter movement garnered support in at least 60 countries across all continents bar Antarctica.

Floyd’s death epitomised the power and violence of colonialism and slavery, reminding us their legacies are all too real.

And the Black Lives Matter movement has catalysed a reckoning with history. Activists have toppled celebratory statues of white slave owners and exploiters, and forced a global discussion of how we remember — and repair — histories of racial prejudice and colonialism.

For the Black poet Benjamin Zephaniah, this is not just about tearing down statues. It is about being honest.

The uprisings we see […] are happening because history is being ignored — and ultimately, it’s all about history.

His view is that Black people will not be respected until their history is. 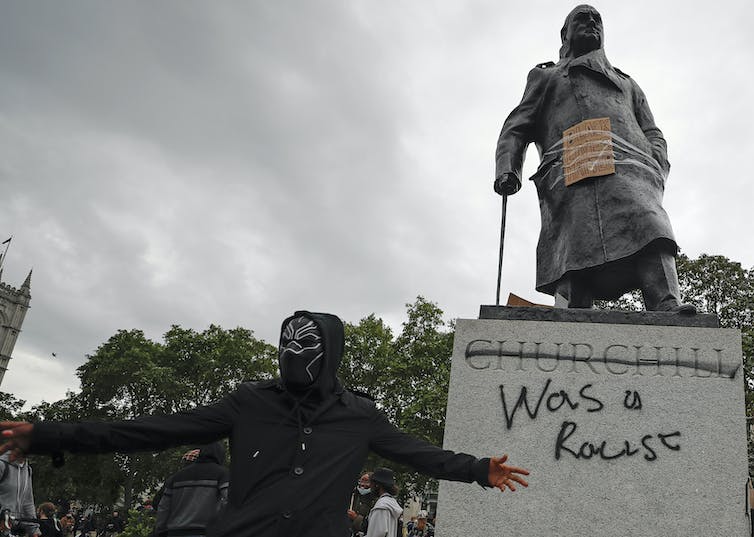 A history of slavery and oppression

This reckoning with history has been palpable in Australia, too. The pandemic scuttled the costly re-enactment of Captain James Cook’s voyage to the Pacific in 1770 to mark the 250th anniversary.

And as Black Lives Matter protests erupted in Australian cities, Prime Minister Scott Morrison said Australia should not import them, that there was no equivalence here. He declared Australian history slavery-free.

Historians and commentators were quick to correct him. Not only had there been slavery in Australia, but Australia has a long history of police violence toward Indigenous people.

We share a history of Black resistance to white oppression, too. A century ago, Indigenous activists joined a Black nationalist movement around the globe fighting for racial equality and self-determination in the context of police brutality, powerlessness and racism. That protest never ended.

The family of David Dungay Jr, a Dunghutti man who died in jail in 2015, have been fighting over years for justice. The Black Lives Matter movement shone a light on his death, as well as the more than 430 other Indigenous deaths in custody since a royal commission on the issue delivered its report in 1991. 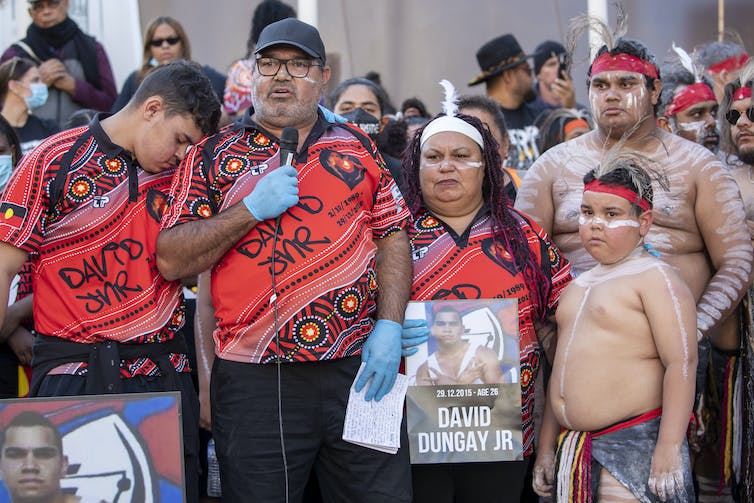 It is little wonder that, as we leave 2020, Indigenous leaders speak of changing the narrative of the nation and remind us of the gift of the Uluru Statement from the Heart, now over three years old.

The statement made First Nations sovereignty the foundation for a fuller understanding and expression of Australian nationhood. And history was critical to its formulation. Truth-telling preceded the call for reform at the First Nations National Constitutional Convention in 2017 and was placed on the agenda by the participants themselves.

This should not be surprising. Stories have always shaped relationships in Aboriginal and Torres Strait Islander culture. They speak to connections between language, culture and land, influence behaviour and serve as a roadmap for living.

This is why story is at the centre of the Uluru Statement. As Galarrwuy Yunupingu argues in his essay “Rom Watangu”, which was submitted with the Referendum Council’s final report on the deliberations at Uluru, storytelling and songlines are the bedrock of Aboriginal law, sovereignty and identity.

It is through the song cycles that we acknowledge our allegiance to the land, to our laws, to our life, to our ancestors and to each other.

The Uluru Statement is meaningless outside this context.

Read more: The Uluru statement showed how to give First Nations people a real voice – now it's time for action

The history embedded in the Uluru Statement

The Uluru Statement consists of three parts: the central frame of the statement, the history it contains, and the surrounding artwork. 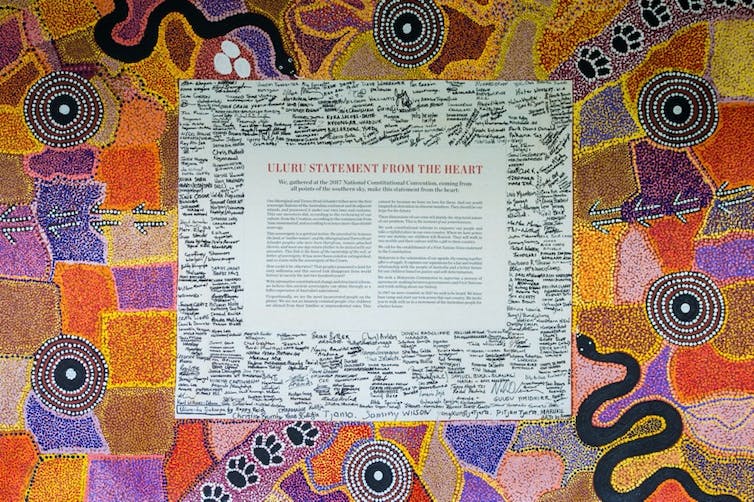 The first is of two snakes, Kuniya, a female python, and Liru, a poisonous snake, who create the landscape of Uluru in the context of a fight at Mutijula spring.

The second is of the Mala people, represented by the prints of the rufous-hare wallabies. They were holding a ceremony on top of Uluru and became involved in an altercation with men from the west. Those men created Kurpany, the Devil Dingo, whose prints are also on the canvas.

The task for us is to understand and weave all sides of the story together, including the spectacular achievements of Indigenous peoples and, as the report describes it, the post-colonial years

replete with triumph and failure, pride and regret, celebration and sorrow, greatness and shame.

Not replacing, but reimagining the old

At a time when history is so contested, part of the gift of the statement is that it allows us to rethink history’s purpose.

The Indigenous participants at Uluru understood what the British historian, EH Carr, did. History, he said, is not about facts alone.

The facts […] are like fish on the fishmonger’s slab. The historian collects them, takes them home and cooks and serves them.

Rather, history is about interpretation, negotiation, subjectivity and complexity. It is a dialogue between past, present and future, acknowledging contested versions of the past which are ongoing, stories that are told and retold.

It is impossible to imagine the Uluru Statement without the artwork — the story — that frames it. Its composition suggests that Kuniya and Liru bring the statement into being, as a new truth — not replacing, but reimagining the old.

Read more: Instead of demonising Black Lives Matter protesters, leaders must act on their calls for racial justice

But truth-telling is not just about recounting history alone. It is about acknowledging The Law that was violated by dispossession but endured. Yunipingu reminds us that history and law are the foundation for social and cultural responsibility and governance.

The generosity of First Nations people is their willingness to share their stories. Those of Kuniya and Liru are powerful reminders that in writing our history, we create the landscapes we share and leave inscriptions of the past for the future.

The Uluru Statement provides an opportunity to bind law, history and politics anew. Situating Indigenous sovereignty as the basis of a fuller expression of nationhood is about recognising the myriad songlines of Australian history. Acknowledging this truth enables others.

Indigenous people have been gifting non-Indigenous society for a very long time. There is a political vision in such acts of rapproachment: a new relationship that recognises Indigenous sovereignty as the basis of redefining — and retelling the stories of — the nation.