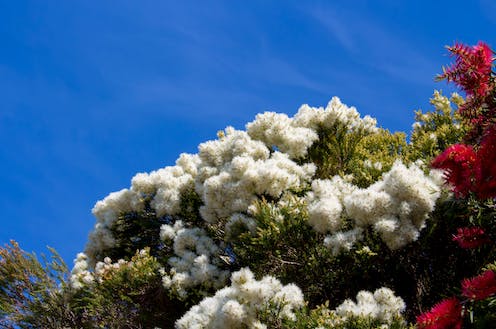 Often in the lead up to Christmas, the tree with the curious common name “snow in summer” is in full bloom.

Snow in summer (Melaleuca linariifolia) is an Australian paperbark, and is endemic to parts of Queensland and New South Wales. It has spikes of creamy white flowers that grow in dense clusters at the ends of...

Often in the lead up to Christmas, the tree with the curious common name “snow in summer” is in full bloom.

Snow in summer (Melaleuca linariifolia) is an Australian paperbark, and is endemic to parts of Queensland and New South Wales. It has spikes of creamy white flowers that grow in dense clusters at the ends of branches and twigs. When in profusion, they look very much like snow-capped foliage.

It intrigued me as a youngster and, not surprisingly, I associated it with Christmas and the images of the snowy festivals of the northern hemisphere, which were such a contrast to our own experiences.

Depending where you live, Melaleuca linariifolia tends to flower from late October until February, but in many parts of Australia they are in full flower in December. Once they start, however, you must be quick to catch sight of them — the impressive flower show doesn’t last more than a couple of weeks.

Hear the hum of insects

Naturally, snow in summer often grows near water and rivers, and can reach heights of ten to 12 metres (but is often lucky to make it to eight metres). 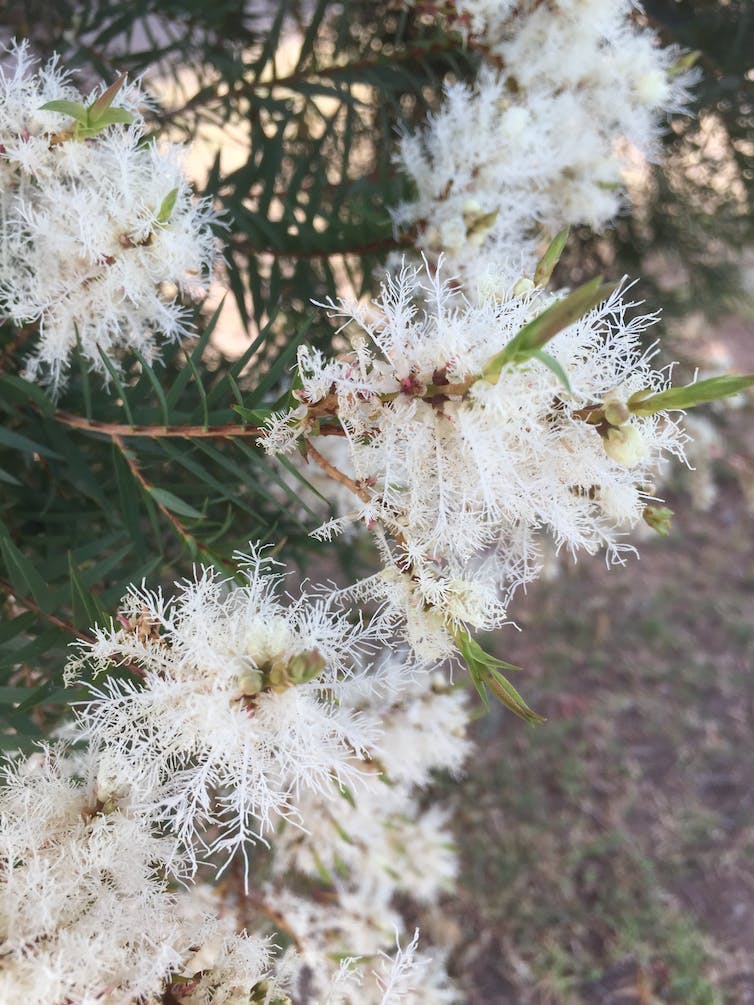 Its dense canopy provides excellent habitat for native birds and mammals such as honey-eaters and possums, as it offers protection and great nesting sites. The nectar in its flowers attracts native birds, bees and other insects, and if you wander past when it’s in full bloom, you can hear the hum of insect visitors.

Read more: Why there's a lot more to love about jacarandas than just their purple flowers

The fruits develop as hard woody capsules, which only release their seed after a fire or when they dry out. They are like little woody cups about five millimetres across, glued to the woody branches.

Like all paperbarks, the bark of snow in summer is wonderfully spongy and can be quite thick. You can peel it off in sheets, draw and write on it. It also had uses for Indigenous peoples, who would wrap the strips of bark around fish or meat and then bury the food under sand or soil for slow cooking. 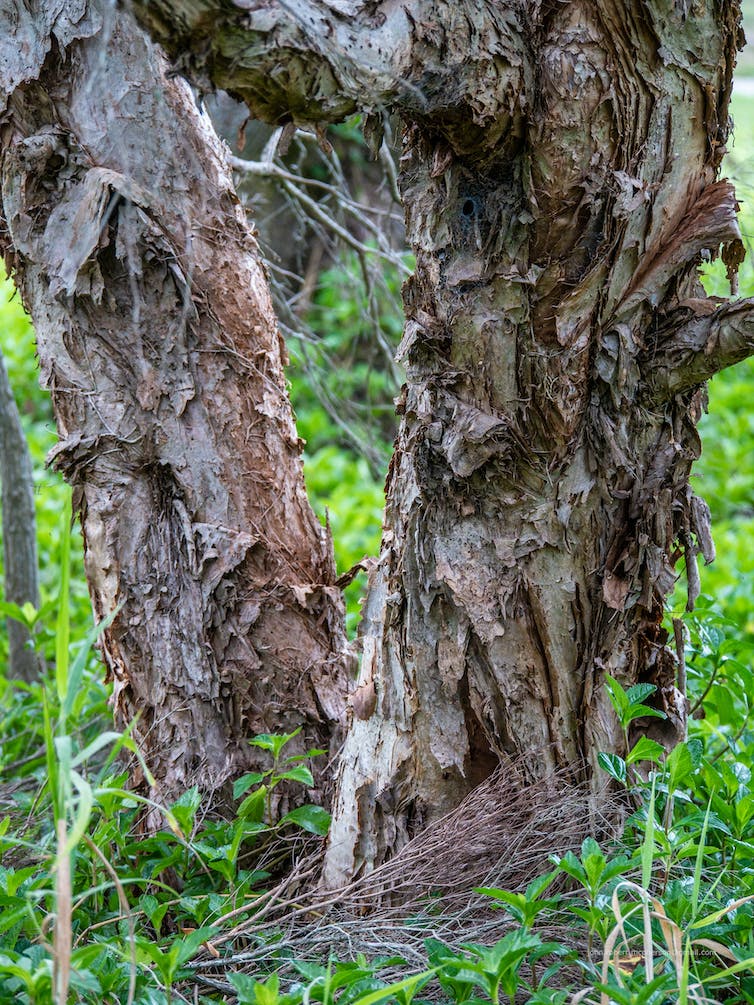 The thick, spongy bark of Melaleuca linariifolia can be easily torn off in large strips. John Robert McPherson/Wikimedia, CC BY-SA

From farms and nature strips to pharmacies

As far back as the 1970s, snow in summer was planted in urban nature strips and as an effective landscape screening plant. While many of those 1970s nature strip trees are gone, those that remain still put on quite a show.

They were also planted widely as a wind break on farms because of its low growing habit and dense canopy. But farmers may have been left disappointed as the trees burnt well in fires and tended to collapse as they reached the end of their useful lives, which could be as short as 20 years.

It has been widely used horticulturally and there are compact forms, such as those named “snowstorm” and “sea foam”, that grow only to about two metres and make hardy garden shrubs. 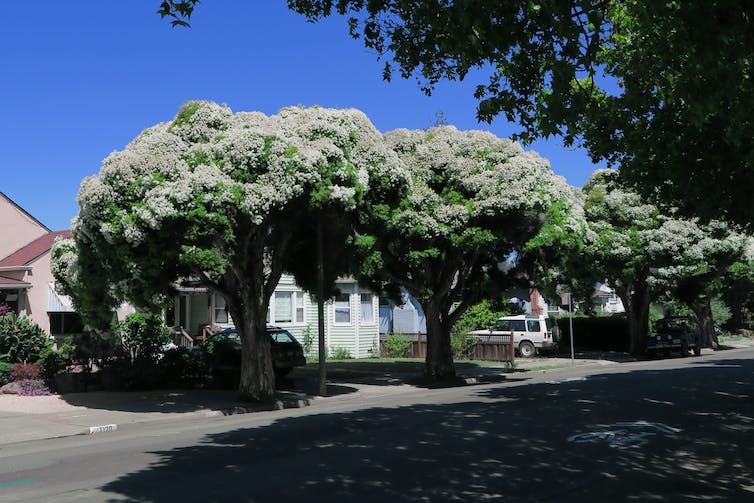 Snow in summer is native to eastern Australia, but has been planted widely elsewhere, such as in California, US. John Rusk/Flickr, CC BY

For the gardeners, Melaleuca linariifolia is easy to propagate from both cuttings and seed. It has quite an extensive root system that can cause problems if you have leaky pipes. They love water — in fact, they’re what botanists call “luxury water users”, and have little or no control of how much water they take from the soil.

They grow well in almost any soil and it doesn’t matter if they’re occasionally waterlogged, as they tolerate periods of inundation. If you want a plant that will drain a swamp, Melaleucas in general are up for it.

Like many members of the Myrtaceae family — which includes eucalypts and tea tree — Melaleuca linariifoliais are rich in essential oils. One of these, Terpinen-4-ol is found in high concentrations in snow in summer and is an antioxidant and powerful antiseptic.

It can be used as disinfectant and to treat skin problems as it is non-irritant. There is great scientific interest at the moment in its use in anti-bacterial and anti-viral medicines. 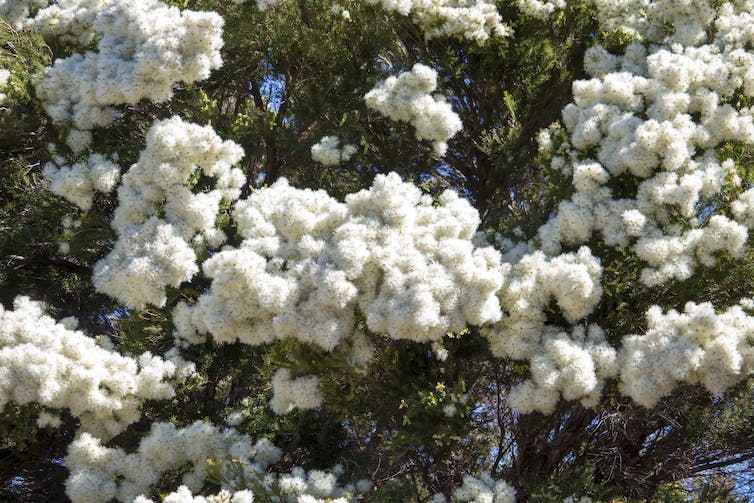 Snow is summer typically blooms for only around two weeks every year. Shutterstock

By any other name

Just to avoid confusion, some of you may know of other plants as snow in summer. The most common is Cerastium tomentosum, which is a low growing ground cover with small white trumpet-like flowers. It is a southern European plant, but has been widely planted in gardens around the world. Likewise, Melaleuca alternifolia is also called snow in summer and was once considered to be a variety of Melaleuca linariifolia.

Melaleuca linariifolia was one of the first plants I planted in my own first (and only) backyard in the late 1970s.

I always anticipated its flowering and would make sure our children saw the flowers, explained why it was called snow in summer and usually noted the number of days to Christmas. It is one of the trees they remember still.