Around Australia, the buzz-saw siren of cicadas heralds the beginning of summer. With 237 recorded species of cicada in Australia, almost no area of the country is untouched by their song. Up to 800 species in Australia are still to be scientifically recognised.

Cicadas, however, aren’t unique to Australia: the insects are found all over the world, though they’re most common in tropical regions.

As the world’s loudest insects, the ear-splitting call from the males is a love song to draw their mates near. But humans, too, have been drawn to singing cicadas, with the insects featuring in ancient poetry and literature of different cultures for thousands of years.

So, as we settle into summer, let’s explore the curious life-cycle of cicadas, and how people in ancient Greece and China, in particular, revered them.

The sound of summer

The life of a cicada begins as one of up to 400 eggs laid by a female in the bark of a tree. A nymph (juvenile) cicada hatches, falls to the ground and tunnels into the dirt to begin the majority of its life.

Cicada nymphs will live in the soil for between one and five years, though different species may remain underground in the nymph stage for longer. In the US, for example, one species can live underground for up to 17 years before emerging.

When ready to become adults, nymphs must leave the soil to moult. A split opens along the back of the nymph’s exoskeleton and the adult cicada pushes its way out.

These cicada shells — the ghost of its youth — are often the only evidence we can find of the insect. As an adult, a cicada will eat, sing, mate and die, all in a few weeks. 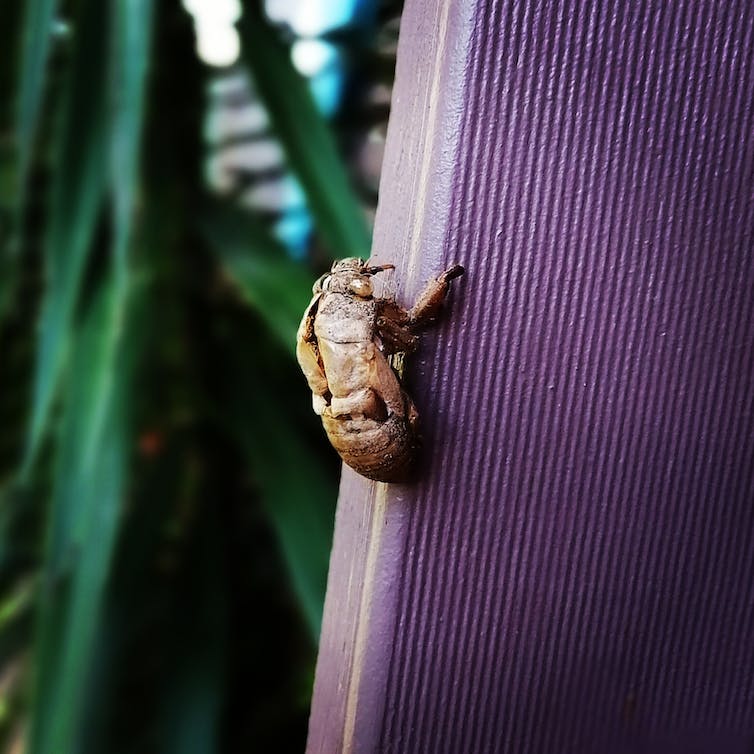 The shell left behind as a cicada changes from a nymph to an adult. You can see a large split from the head down the back to the abdomen the adult emerged from. Eliza Middleton

Each species has its own unique call, and the noise can be truly deafening. For perspective, normal conversation between humans is recorded at about 60 decibels. But some cicada species, such as the Greengrocer cicada (Cyclochila australasiae) found along the coast of southeast Australia, can reach 120 decibels.

This is like standing beside emergency sirens. It’s also on the edge of causing pain or injury to human ears, which generally occurs at 130 decibels.

The noise is created by a structure called the tymbal, which works a bit like a drum. The tymbal is a thin membrane stretched across a number of “ribs” creating large chambers. These membranes vibrate rapidly through muscle action, which makes a clicking sound that’s amplified by their hollow abdomen.

There are more than 3,200 cicada species scientifically described, and many more waiting to be discovered. They belong to the superfamily called the Cicadoidea, which is part of a larger animal group — the order Hemiptera, or the “true bugs”.

Insects in the Hemiptera order, such as aphids, leafhoppers and bed bugs, alongside cicadas, are known for having sucking and piercing mouthparts. This allows them to feed on sap by piercing the tree and drinking from the xylem (plant tissue that transports water and nutrients from roots to stems). This is how both the nymphs and adult cicadas feed — the former feeds off the roots while the latter feeds from the trunk.

Read more: Photos from the field: zooming in on Australia's hidden world of exquisite mites, snails and beetles

For the people of ancient Greece and China, cicadas were the focus of many beliefs that, despite the separation of East from West, were surprisingly similar. Both cultures admired them.

For the Greeks, the “tettix” was carefree and harmless. For the Chinese, the “tchen” was noble, yet also humble. 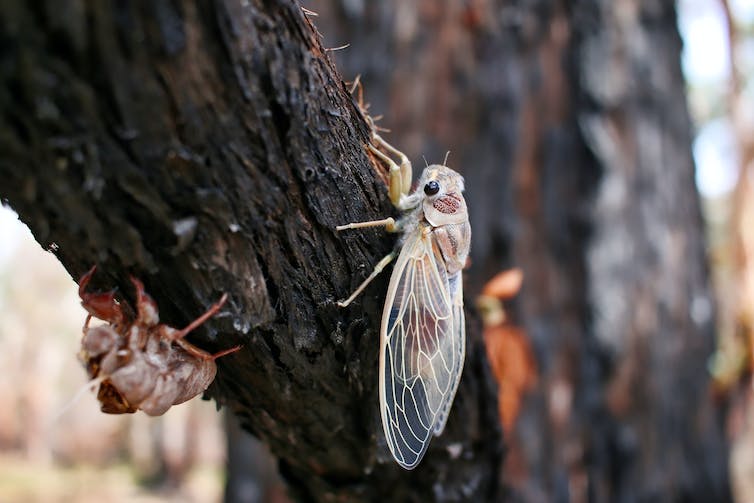 A nymph cicada that just emerged from its shell, which lies beside it. Shutterstock

Both societies loved the insects’ incessant call. Greek literature describes their call as “sweet”, such that a friendly cicada, legend says, once replaced the missing note when a string broke on a musician’s lyre. Like they do for us today, the cicadas’ hum also heralded the summer, especially the midday heat.

The Chinese of the Tang dynasty (618 to 906 AD) were so enamoured with the insects’ song, cicadas were caught and sold in small cages as pets. The Greeks may also have kept cicadas, as revealed by epitaphs written after their death, although the captive insects would have quickly died from starvation.

The esteem with which the cicada was held is also reflected in their association with the arts in both cultures.

They were the popular subject of Chinese poetry and paintings. And another Greek story tells us that when the Muses, goddesses of the arts, were born, an ancient race of men sang non-stop until they died, after which they transformed into cicadas. 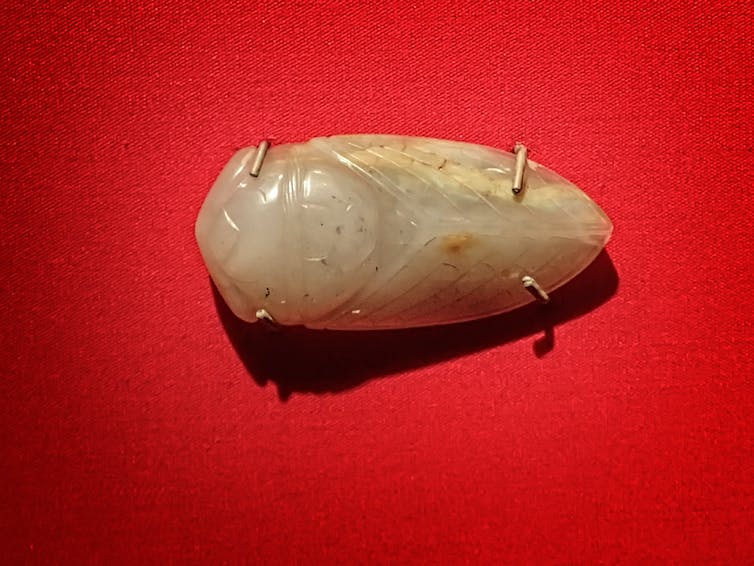 Cicada biology was also noted in these ancient times. In the 4th century BC, Aristotle determined correctly that only the male cicada sings and the cicada’s call was produced by the movement of abdominal membranes. Chinese observers also noted the female’s lack of sound in the 6th century AD.

The insects’ life cycle was of enormous significance to both peoples. The nymphs’ emergence from the earth provided a powerful symbol of Greek “autochthony”, the belief a community had always lived in a particular place as the original inhabitants. And the moulted skin of adult cicadas was a sign of immortality.

Read more: This ancient Chinese anatomical atlas changes what we know about acupuncture and medical history

During China’s Han Dynasty (206 BC to 220 AD), jade cicadas were placed in the mouths of the dead. The stone had supposed preservative qualities, while the insect offered the hope of resurrection.

The Greek elite are said to have worn gold cicadas in their hair to signal their ties to Athens. Such ornamentation was also associated with Chinese nobility, in which golden cicadas adorned the hats of Han Dynasty court officials. Intriguingly, this practice was said to have been introduced by outsiders.

We cannot yet say whether such similar beliefs stem from early East-West contact. But the prominent cultural role of the “tchen” and “tettix” is certainly testimony to humanity’s enduring summer love affair with the curious caterwauling cicada.