It could be argued artificial intelligence (AI) is already the indispensable tool of the 21st century. From helping doctors diagnose and treat patients to rapidly advancing new drug discoveries, it’s our trusted partner in so many ways.

Now it has found its way into the once exclusively-human domain of love and relationships. With AI-systems as matchmakers, in the coming decades it may become common to date a personalised avatar.

This was explored in the 2014 movie “Her”, in which a writer living in near-future Los Angeles develops affection for an AI system. The sci-fi film won an Academy Award for depicting what seemed like a highly unconventional love story.

In reality, we’ve already started down this road.

Delving into the human psyche

The online dating industrty is worth more than US$4 billion and there are a growing number of players in this market. Dominating it is the Match Group, which owns OkCupid, Match, Tinder and 45 other dating-related businesses.

Match and its competitors have accumulated a rich trove of personal data, which AI can analyse to predict how we choose partners.

The industry is majorly embracing AI. For instance, Match has an AI-enabled chatbot named “Lara” who guides people through the process of romance, offering suggestions based on up to 50 personal factors.

Tinder co-founder and CEO Sean Rad outlines his vision of AI being a simplifier: a smart filter that serves up what it knows a person is interested in.

Dating website eHarmony has used AI that analyses people’s chat and sends suggestions about how to make the next move. Happn uses AI to “rank” profiles to show those it predicts the user might prefer.

Loveflutter’s AI takes the guesswork out of moving the relationship along, such as by suggesting a restaurant both parties could visit. And Badoo uses facial recognition to suggest a partner that may look like a celebrity crush. 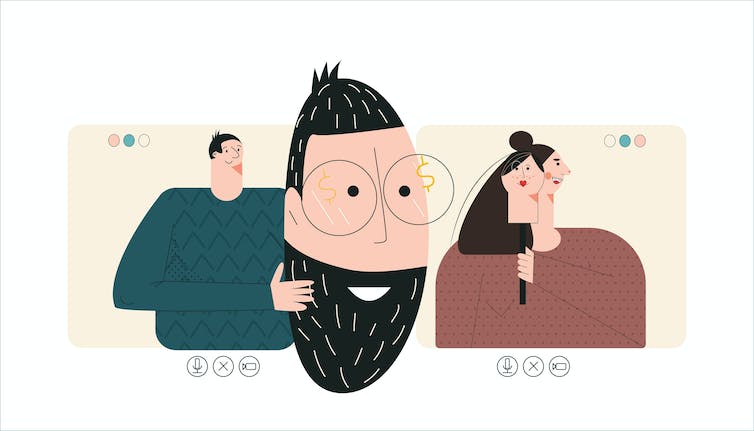 People can easily mirepresent themselves online, but would an AI be able to figure out if this happens? Shutterstock

Dating platforms are using AI to analyse all the finer details. From the results, they can identify a greater number of potential matches for a user.

They could also potentially examine a person’s public posts on social media websites such as Facebook, Twitter and Instagram to get a sense of their attitudes and interests.

This would circumvent bias in how people represent themselves on matchmaking questionnaires. Research has shown inaccuracies in self-reported attributes are the main reason online dating isn’t successful.

While the sheer amount of data on the web is too much for a person to process, it’s all grist to the mill for a smart matchmaking AI.

Read more: Looking for love on a dating app? You might be falling for a ghost

Shovelling your data into the dating sandbox

As more user data is generated on the internet (especially on social media), AI will be able to make increasingly accurate predictions. Big players such as Match.com would be well-placed for this as they already have access to large pools of data.

And where there is AI there will often be its technological sibling, virtual reality (VR). As both evolve simultaneously, we’ll likely see versions of VR in which would-be daters can “practice” in simulated environments to avoid slipping up on a real date.

This isn’t a far stretch considering “virtual girlfriends”, which are supposed to help people practice dating, have already existed for some years and are maturing as a technology. A growing number of offerings point to a significant degree of interest in them.

With enough user data, future AI could eventually create a fully-customised partner for you in virtual reality – one that checks all your “boxes”. Controversially, the next step would be to experience an avatar as a physical entity.

It could inhabit a life-like android and become a combined interactive companion and sex partner. Such advanced androids don’t exist yet, but they could one day.

Read more: Robots with benefits: how sexbots are marketed as companions

Proponents of companion robots argue this technology helps meet a legitimate need for more intimacy across society — especially for the elderly, widowed and people with disabilities.

Meanwhile, critics warn of the inherent risks of objectification, racism and dehumanisation — particularly of women, but also men. 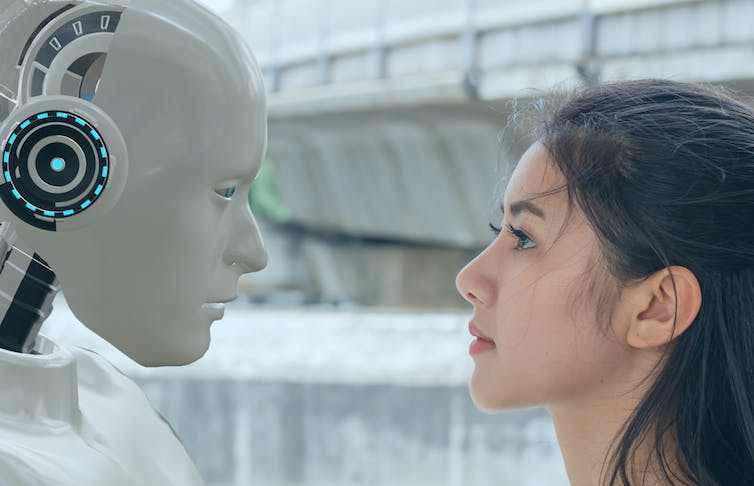 Since sex bots are a relatively primitive technology, much remains unknown about their risks. But some concerns include the potential for addiction, increased social isolation and non-consensual replication of real people. Shutterstock

Using tech to save us from the problems of tech?

Another problematic consequence may be rising numbers of socially reclusive people who substitute technology for real human interaction. In Japan, this phenomenon (called “hikikomori”) is quite prevalent.

At the same time, Japan has also experienced a severe decline in birth rates for decades. The National Institute of Population and Social Security Research predicts the population will fall from 127 million to about 88 million by 2065.

Concerned by the declining birth rate, the Japanese government last month announced it would pour two billion yen (about A$25,000,000) into an AI-based matchmaking system.

AI as a facilitator, not a replacement

The debate on digital and robotic “love” is highly polarised, much like most major debates in the history of technology. Usually, consensus is reached somewhere in the middle.

But in this debate, it seems the technology is advancing faster than we are approaching a consensus.

Generally, the most constructive relationship a person can have with technology is one in which the person is in control, and the technology helps enhance their experiences. For technology to be in control is dehumanising.

Humans have leveraged new technologies for millenia. Just as we learned how to use fire without burning down cities, so too we will have to learn the risks and rewards accompanying future tech.