Review: Humans 2.0, directed by Yaron Lifschitz, Circa at Sydney Festival

The black circular stage is lit by small towers of side-lights. Lights fade to black before suddenly revealing ten humans. The haste of this image elicits gasps. Each body is frozen in a parallel plank position, twisted with one armpit raised towards the crowd. Another blackout. The bright light returns: a soft strobe pulsing in tempo with the bodies, twisting in and out.

The show is divided into several movements, each with a different mood and combination of thrills, taking the audience through a series of breathtaking feats. Created and directed by Yaron Lifschitz, the work is presented as a sequel to the company’s 2017 show Humans, the updated title gestures towards the superhuman capabilities of the cast.

Bodies flock together and move as one engine.

A woman hangs on silks enacting staccato, looping movement, like a spider spinning its web.

Performers lie on their backs, arms outstretched, holding the feet of other performers in the palms of their hands. As their elevated partners move in slow motion, each floor-bound human assists by rolling onto their stomach, never losing sight of their glorified marionettes. This poetic movement is arresting. 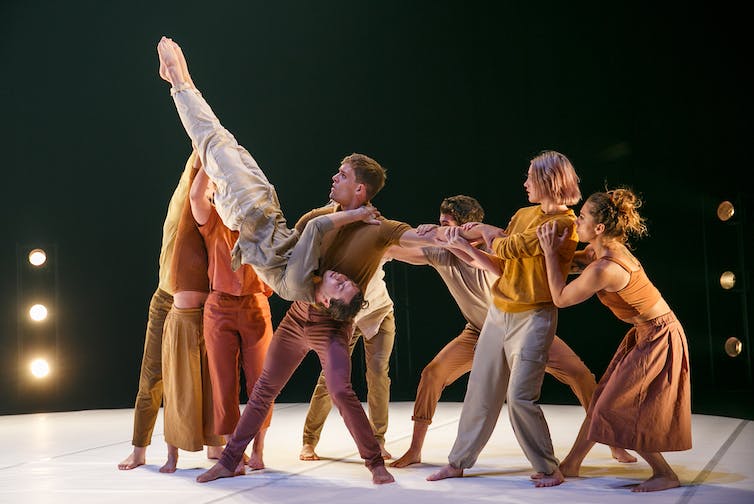 Bodies flock together, uniting as if a single machine. Yaya Stempler/Sydney Festival

I hear a spectator whispering emphatically to her next-door neighbour: “Do you know how much strength that would take?”

A red wash illuminates the stage. A muffled techno rhythm, with a catchy country guitar and a base drumbeat, infects the performers with seemingly involuntary pelvic movement. Hans Christian Andersen’s fairytale, The Red Shoes comes to mind: a story of seduction and conditional mercy where a girl is forced to dance.

A man holds a woman sideways like a rockstar holding his guitar and strums imaginary strings. Such physical jokes remind me of the French choreographer Philippe Decouflé’s goofy Le P'tit Bal. I see invisible hula hoops around every dancer.

For esteemed circus theorist Paul Bouissac, “circus is a language”. This scene fills my senses with European dialects of physical theatre and dance: these performers take a break from the dynamic tricks typical of Australian circus to poke fun at themselves, and their craft. 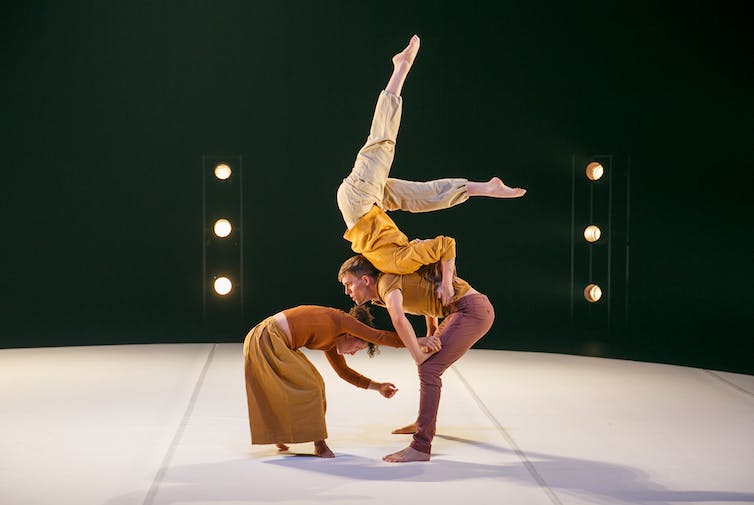 Upside down, the cast and the audience have room to breathe. Yaya Stempler/Sydney Festival

The performers turn upside down. Here, the work (and the audience) is given a chance to breathe. A performer uses a handstand cane and a fellow performer’s head to bear her weight as she dances with her legs above her.

A spectacular leap opens the final act. The cast flip and soar through the air. Some slapstick comedy ensues when the acrobats intentionally miss catching each other.

What strikes me as most significant in Humans 2.0 is the carefully crafted dramaturgy of movement. A lot of attention is given to the quality of a step, gesture or touch. The clear intentions behind every action endows the work with a satisfying depth, especially visually.

The performance lacks an intellectual level of engagement, but perhaps this is not its intention. As Lifschitz indicates, he is more preoccupied with an exploration of extreme human biomechanics rather than expressing a nuanced narrative. Lifschitz understands the effect physical theatre can have on the viewer, leaving the audience utterly exhausted and in awe.

Drawing on seminal phenomenologist Maurice Merleau-Ponty, performance scholar Peta Tait writes: “I watch aerialists with attention that jumps and flickers, but which shatters and splinters in the attempt to describe them”. 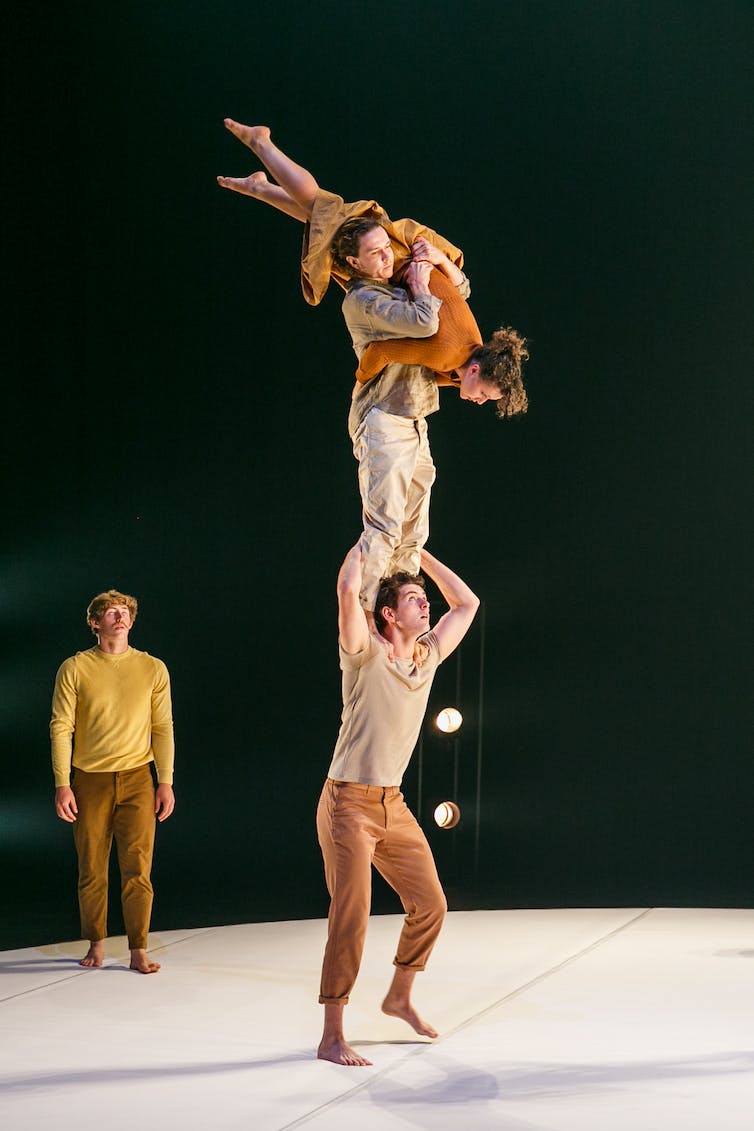 Circus is about the physical body: words to describe it can sometimes be elusive. Yaya Stempler/Sydney Festival

In the aftermath of each feat, I, too, feel at a loss for words. But I feel as if I am experiencing the physicality in my own body. I sense other spectators feel the same.

Such an ineffable response is not without reason. Tait goes on to argue circus is received by spectators viscerally. She says: “a spectator will ‘catch’ the aerial body with his or her senses in mimicry of flying […] In this visceral catching, motion and emotion converge”.

As a woman slides down a human pyramid clinging to one body after another, like a treehugger around a trunk, I wonder at once about the technique it requires, and the emotionally-charged relationships the image sets forth.

Humans 2.0 is a seriously sensational spectacle: as aesthetic as it is athletic, as comedic as it is grave, and all in all, a visceral delight.

Humans 2.0 is at Carriageworks for Sydney Festival until January 21.