We will not be able to put the COVID-19 pandemic behind us until the world’s population is mostly immune through vaccination or previous exposure to the disease.

A truly global vaccination campaign, however, would look very different from what we are seeing now. For example, as of January 20, many more people have been immunised in Israel (with a population less than 10 million) than in Africa and Latin America combined.

Notwithstanding recent questions about the effectiveness of the initial single dose of the vaccine, there is a clear disparity in vaccine rollouts internationally.

That is a problem. As long as there are still existing reservoirs of a propagating virus it will be able to spread again to populations that either cannot or would not vaccinate. It will also be able to mutate to variants that are either more transmissible or more deadly.

Evolutionary pressure on the virus will inevitably favour mutations that make the disease more transmissible, or the virus itself more vaccine-resistant. It is clear, therefore, that every nation’s interest is in universal vaccination. But this is not the trajectory we are on. 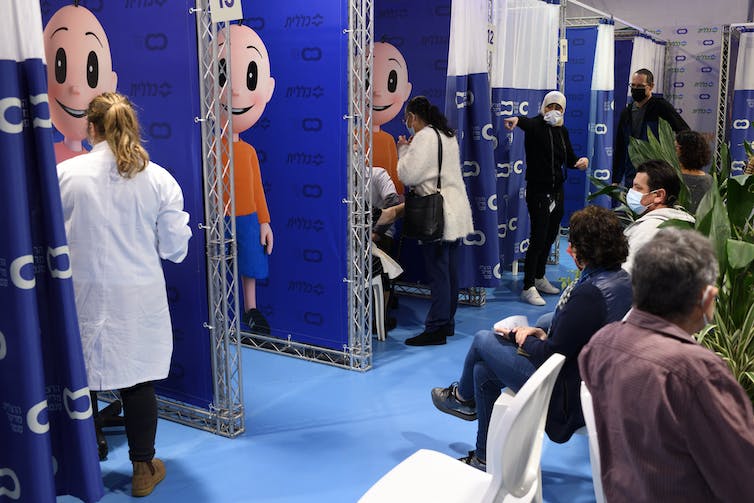 Fast roll out: a busy coronavirus vaccination station in Israel in mid-January. GettyImages

Fortunately, in the countries already vaccinating, the vaccine is (mostly) not allocated by wealth or power, but by prioritising those facing the highest risk. At a country level, however, national wealth is determining vaccine roll out.

Yet in the past we have managed to eradicate diseases worldwide, including small pox, a viral infection with much higher death rates than COVID-19.

There are two barriers that prevent us from rapidly pursuing a similar goal for the current pandemic:

At this point, we don’t have a global system to confront either of these problems. Each vaccine’s patent is owned by its developer, and the World Health Organisation (WHO) is too weak to be the world’s Ministry of Health.

Read more: Should children get the COVID-19 vaccine?

Overcoming big pharma’s profit motive has been achieved before, however.

In 1955, Jonas Salk announced the development of a polio vaccine in the midst of a huge epidemic. The news initially met with scepticism. Even employees of his own laboratory resigned, protesting that he was moving too fast with clinical experimentation.

When a huge placebo–controlled clinical trial involving 1.6 million children proved him right, however, he declared that in order to maximise the global distribution of this lifesaving vaccine his lab would not patent it. Asked who owned the patent, he famously replied:

Well, the people I would say. There is no patent. Could you patent the sun?

In an echo of the current moment, Israel (then a new state) was also experiencing a rapidly spreading polio epidemic. Efforts to purchase vaccines from the US were unsuccessful, as not all American children were yet vaccinated. So a scientist named Natan Goldblum was sent to Salk’s laboratory to learn how to make the new vaccine.

No lawyers were involved and no contracts signed. The young Dr Goldblum spent 1956 setting up manufacturing facilities for Salk’s vaccine in Israel and by early 1957 mass vaccination was underway. 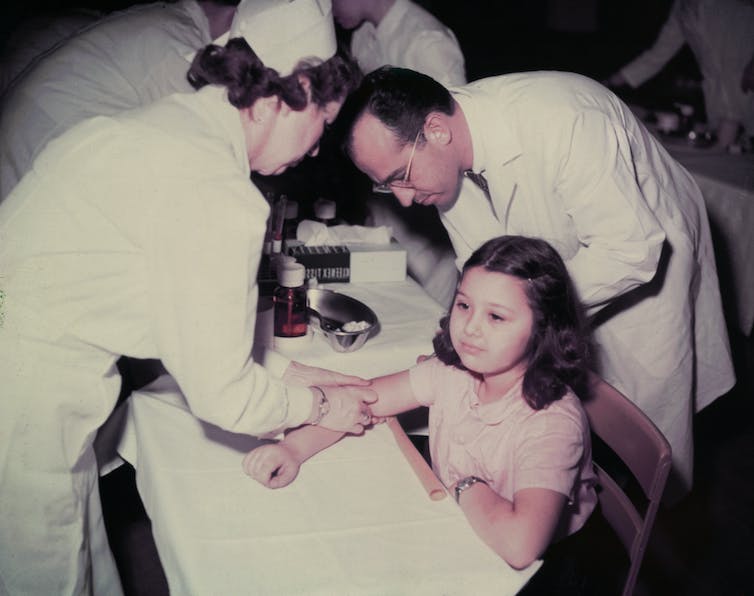 Could you patent the sun? Dr Jonas Salk and a nurse administer a polio vaccine in Pennsylvania in the 1950s. GettyImages

Israel, a small and relatively poor country in the 1950s, became the third country in the world (after the US and Denmark) to produce the vaccine locally and eventually eradicate polio. It took a handful of scientists, a modest budget and, most importantly, no patenting.

Like Salk, Goldblum was aware viruses have complete disregard for political borders. He was also involved in a very successful Palestinian polio vaccination campaign in Gaza.

Read more: The great polio vaccine mess and the lessons it holds about federal coordination for today's COVID-19 vaccination effort

More recently, a highly successful international campaign in the early 2000s saw AIDS treatments distributed in poorer countries. Pharmaceutical companies that owned the patented drugs were forced to supply them at cost or for free, not at market prices set in the rich countries. This was achieved through public pressure and the willingness of governments to support the required policies.

A temporary withdrawal of the patenting rights to the successful COVID-19 vaccines, with or without compensation for the developers, seems a small price to pay for an exit strategy from this global and incredibly costly crisis.

Overcoming national interest is perhaps more complicated. Clearly, countries have an interest in vaccinating their most vulnerable populations first. But at some point, well before everyone is vaccinated, it becomes more efficient for countries to start vaccinating their neighbours (the countries they are most exposed to through movements of people and trade).

Disappointingly, rich countries today behave as though they will reach 100% vaccination rates before they give away a single dose, with many having bought well in excess of what is needed for 100% coverage.

Read more: COVID vaccine: some waste is normal – but here's how it is being kept to a minimum

The COVAX plan to distribute vaccines in poorer countries has so far been an under-funded effort that has not yet delivered a single dose of vaccine. Even if COVAX were to be fully funded, it mostly aims to donate an insufficient number of vaccine doses to the poorest countries, rather than really bring about a universal vaccination programme.

Nevertheless, overcoming the profit-maximising interest of big pharma and the national focus of governments is not a pipe dream. The world has done it before.