It might be summer in New Zealand but we’re in for some wild weather this week with forecasts of heavy wind and rain, and a plunge in temperatures.

Long term, though, New Zealand is definitely warming up, along with the rest of the globe.

The National Institute of Water & Atmosphere Research (NIWA) says 2020 was our 7th warmest in the 112-year record since 1909.

The national average temperature was 0.63℃ above the 1981-2010 normal (more on that later). Six of the eight warmest years in the record have all occurred since 2013.

The overall linear trend in New Zealand’s Seven Station temperature record — an average of readings taken at seven locations across the country — is a warming rate of about 1℃ per century, close to the global rate over the same period.

Read more: Climate explained: what caused major climate change in the past?

That does not mean temperatures just become a little warmer each year, though. There are many ups and downs in a small country like New Zealand as we are exposed to influences from the tropics and the Southern Ocean.

The year 2016 still stands as our warmest on record and as recently as 2012 we had a year that was a little cooler than normal.

When we look at the chances of a warm or a cool year, that is where the warming trend is most obvious.

In the past 25 years of the record, six of the years were cooler than normal and 19 were warmer than normal. That’s a ratio just over three to one in favour of warm years.

In the first 25 years of the record, from 1909, 21 of the years were cooler than normal and four were warmer than normal, a ratio of about five to one in favour of cool years.

The rise of the ‘new normal’

We all talk about a “new normal” but that is literally what will be happening this year.

The normals, the 30-year averages that countries use to define their climates, will be recalculated this year.

The World Meteorological Organization sets the rules for climate normals that are used all over the world.

These normals are averages of temperature, rainfall and other quantities, calculated over the most recent three full decades.

Over the next few years, it is unlikely but still possible we will see a year cooler than the 1991-2020 normal, if we get a lot of southerly winds or if there was to be a large volcanic eruption in the tropics.

If greenhouse gas emissions are not reduced rapidly and future normals were successively around 0.14℃ warmer, New Zealand would be another degree warmer overall by the end of the century, beyond the degree of warming we have seen in the past 100 years. 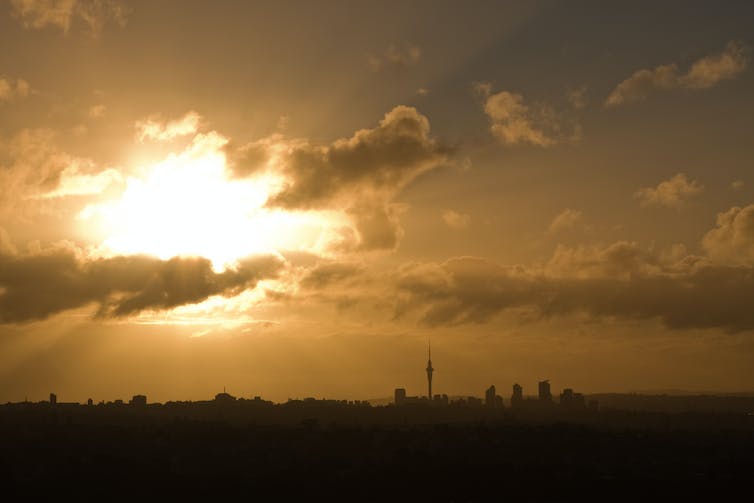 Two degrees of warming would lock in major changes in our climate and at least a metre of sea level rise in the next century.

This year will feel the effects of the La Niña event in the tropical Pacific. La Niña events cool the globe a little on average, so 2021 is expected to come in around one tenth of a degree cooler globally than 2020, but still more than 1.1℃ above pre-industrial temperatures.

On the other hand, because they bring more subtropical air our way and tend to go along with warmer than normal sea temperatures, La Niña events tend to warm New Zealand a little, even while they cool the globe.

Another important factor is how the Southern Annular Mode (SAM) behaves this year, a measure of climate variability that encircles the South Pole and extends up to New Zealand.

A positive SAM warms New Zealand and a negative brings cooler and stormier weather. It is very hard to predict in advance how the SAM will behave because there is a lot of randomness in teh way it changes. But it was positive for much (61%) of last year.

There are many other things that influence New Zealand’s climate and average temperatures so it is hard to say exactly where the 2021 temperature will land. But it will almost certainly be warmer than normal — even warmer than the new normal.