Historically, when a sequel to a film was greenlit, you could rest assured this was because the first film made a tidy profit for its investors. With the advent of streaming services like Netflix, this is no longer necessarily the case. And Occupation: Rainfall shows us this.

Occupation (2018) made barely anything at the box office or through international sales, and yet became a surprise hit on Netflix in the US. Writer-director Luke Sparke was able to leverage this success to fund this sequel.

Although it has a much bigger budget, Occupation: Rainfall is marginally worse than its predecessor.

Occupation was able to make the most of its dramatically compelling narrative of a group of survivors banding together to resist an alien invasion, and the new film takes off where Occupation ended. It’s two years after the first film, and the war between “the resistance” and the “greys” (the aliens) rages on.

Its main narrative follows Matt Simmons (Dan Ewing) and alien Gary (Lawrence Makoare) as they travel from Sydney to Alice Springs to find out about “Rainfall,” an alien super weapon sent to Earth eons earlier. On the way, they pick up Peter Bartlett (Temuera Morrison) who presides over a rural community established in the first film.

Virtuous Amelia Chambers (Jet Tranter) takes up her own war against Hayes, and the epic existential war between aliens and humans is mirrored in these internal tensions within the resistance.

The whole thing is bookended by two drawn out, noisy battle sequences between the humans and aliens.

If you haven’t seen the first film, it all seems fairly shrill and incomprehensible.

A failure of spectacle

There are fantastic alien invasion films that make the most of the conflicts between different species, and, in this, say something interesting and original about life on Earth.

John Carpenter’s cult hit They Live (1988) brilliantly critiques American class inequality through its exploration of invasion, and The Day the Earth Stood Still (1951) says more about the atomic age at the beginning of the Cold War than virtually any other film of the period.

Then there are the more tedious variety: epic war films in which the antagonists happen to look weird and talk in a weird way. These can be effectively done, as in Starship Troopers (1997), but Occupation: Rainfall just does not have the budget to fulfil its premise.

And without a sufficient budget, this kind of epic cinematic spectacle inevitably fails. 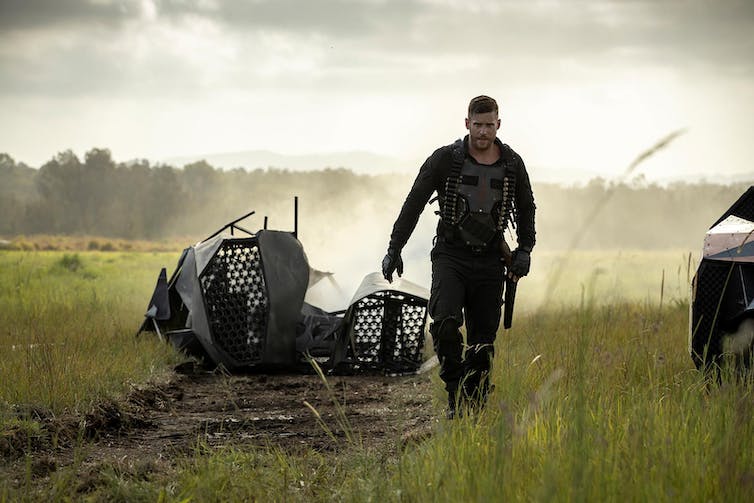 A budget of A$25 million makes it, by Australian standards, a very well resourced film (Occupation was made for A$6 million). But Occupation: Rainfall tries to emulate its much bigger-budgeted brethren like Avatar (2009), made for US$237 million, rather than making its own mark. And this will always be a losing game when it comes to economies of scale.

The visual effects here may have been passable 25 years ago (and look at about the level of the Australian TV show Spellbinder (1995-97) in places), but are laughably bad by contemporary standards.

The spaceships attacking Sydney in the opening battle sequence look like they’ve been rendered using Paint 3D, and we can never suspend our disbelief when looking at the alien companion animals accompanying Matt and Gary on their trip.

For some projects this wouldn’t matter, but building a convincing and immersive world is absolutely critical for this kind of fantasy narrative.

Occupation: Rainfall tries for a visual spectacular — but doesn’t have the budget to pull it off. Monster Pictures

Occupation: Rainfall just doesn’t use its budget creatively or effectively – unlike, for example, Leigh Whannell’s superb Australian science-fiction film Upgrade (2018), with a budget of less than a third of Occupation: Rainfall.

The narrative is unclear and underdrawn. The relationships between the humans and the aliens is never clearly delineated. There are no clear back stories to the characters that might anchor viewers to the world (unlike a film like Alien Nation (1988), which treads similar territory).

It’s not all bad. Aspects of the design are good – there’s an appealing colourfully kitsch quality to the lighting – and the main narrative structure of a pair of mismatched buddies travelling across country facing numerous hazards will always be a winner. 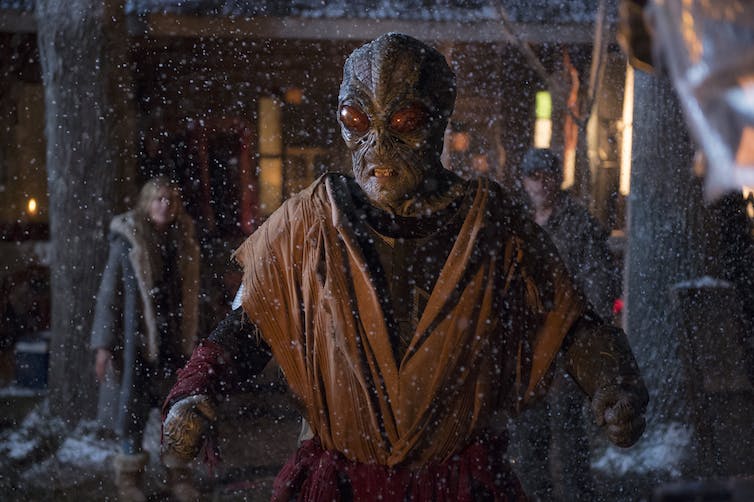 The alien costumes ‘look like objects your mum might have made you for book week in the 1980s.’ Monster Pictures

The look of the greys is appealingly bodgie – their costumes and laser guns look like objects your mum might have made you for book week in the 1980s – and Dan Gillies and Temuera Morrison give strikingly assured performances.

But the strength of these actors backfires in terms of the film as a whole, as we become acutely aware of the Home and Away-ish acting of most of the supporting cast. This was a big enough film to throw Ken Jeong in at the end once they reach Pine Gap, but even his comic relief seems lame, doing little to improve the film. 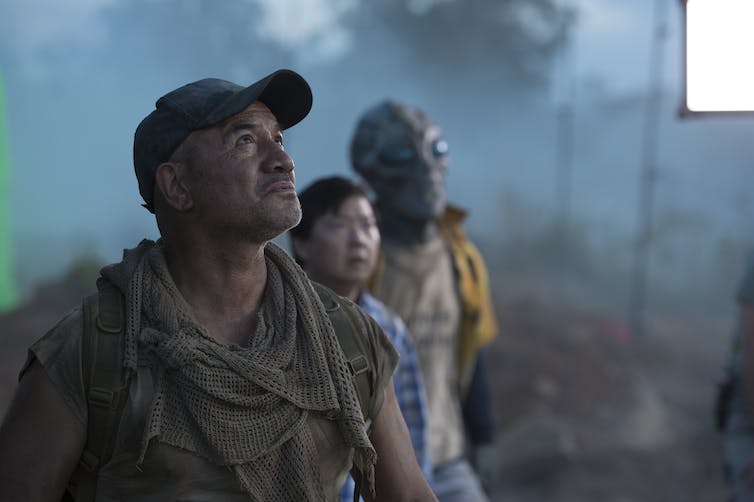 The strength of Temuera Morrison’s performance unfortunately highlights the weaknesses in the rest of the cast. Monster Pictures

The bigger-than-usual budget for an Australian film also plays against Occupation: Rainfall: it makes one painfully aware of the waste. Imagine how many better films could have been made with this money!

It is great to see a sincere genre film coming out of Australia. But Occupation: Rainfall becomes tedious pretty quickly. Given its colonial history, it would seem Australia is primed for a thoughtful, well-made film about alien invasion. This is not it.