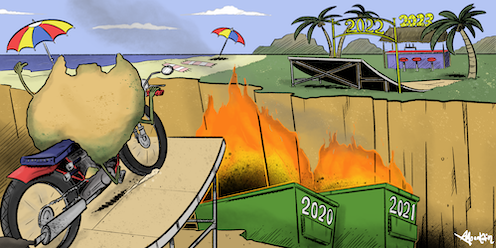 Six months ago the forecasting team assembled by The Conversation was expecting Australia’s recession to continue into 2021, sending the economy backwards a further 4.6% throughout the year.

This morning, in the survey prepared ahead of the Reserve Bank...

Six months ago the forecasting team assembled by The Conversation was expecting Australia’s recession to continue into 2021, sending the economy backwards a further 4.6% throughout the year.

This morning, in the survey prepared ahead of the Reserve Bank board’s first meeting for the year and an address by the Reserve Bank governor to the National Press Club on Wednesday, the same forecasting team is upbeat.

It expects the recovery that began in the September quarter of last year to continue, propelling the economy forward by a larger than normal 3.2% throughout 2021, with growth slowing to more sedate 2.1% per year by the middle of the decade, still well above than dismal 1.7% per year expected six months ago.

The unemployment rate is now expected to remain near its present 6.6% throughout 2021, instead of soaring to almost 10% as expected six months ago.

But improvement in the unemployment rate is expected to be slow, and as house prices and share market prices climb, most of the panel expect the Reserve Bank to lose its patience and begin to lift interest rates from their emergency lows before the end of next year, ahead of its published schedule.

Only two of the panel expect the economy to shrink further in 2021.

The rest expect the economy to grow, two of the panel by at least 5%, something that isn’t out of the question given that the economy shrank by 7% during the worst three months of the 2020 coronavirus restrictions and clawed back only 3.3% in the three months that followed.

Panellist Saul Eslake who forecast growth of 3.5% in 2021 six months ago is now forecasting growth of 5.25%, saying the transition away from JobKeeper and other supports has been going more smoothly and the property market and residential building market have holding up much better than he had expected.

Growth will be constrained by unusually slow population growth, a gradual tightening of government purse strings and anticipation of higher interest rates.

China’s 2021 growth, expected to be 4% six months ago, is now expected to be 6.3% as it reaps the fruits of having recovered early from its coronavirus crisis with its production systems intact. Panellist Warren Hogan cautions that longer term China is likely to place less importance on economic growth and more on military adventurism.

The continuing COVID crisis in the United States is expected to push its recovery out into the second half of the year as vaccination programs and President Biden’s stimulus measures take hold.

Although few on the panel expect unemployment to get much worse, most believe it will be many years before the unemployment rate shrinks to the 4.5% to 5% the Reserve Bank has adopted as a target.

Panellist Julie Toth says the end of JobKeeper in March will reduce the ability of struggling businesses to keep their employees. Closed boarders mean skill mismatches and shortages will grow alongside persistent unemployment and underemployment.

Other panellists warn of a “jobless recovery” as large organisations that held onto labour during the crisis start to shed staff as part of digitisation programs.

At the same time annual inflation is expected to climb from last year’s unusually low 0.9% to 1.6%, putting it above wage growth for the first calendar year on record, sending the buying power of wages backwards.

A broader measure of living standards, real net national disposable income per capita, which takes account of the hours worked in each job and other sources of income, is expected to continue to climb in 2021, continuing the recovery begun in last year’s September quarter after the precipitous slide of 8% during the first half of last year.

Household spending is expected to climb a further 3.4% in real terms, continuing the recovery begun in the September quarter after a slide of 13.8% in the first half of last year.

The panel expects the Reserve Bank to lift its cash rate from the present all-time low of 0.10% well ahead of the “at least three years” timeframe set out by the bank.

The bank had promised not increase the cash rate until actual inflation was “sustainably within” its 2% to 3% target range.

And it had moved the three-year bond rate to 0.10% as a sign that it expected the cash rate to stay at 0.10% for at least three years.

Although few on the panel expect inflation to climb back to the Reserve Bank’s target range by the end of next year, most expect the bank to begin to lift its cash rate by then. 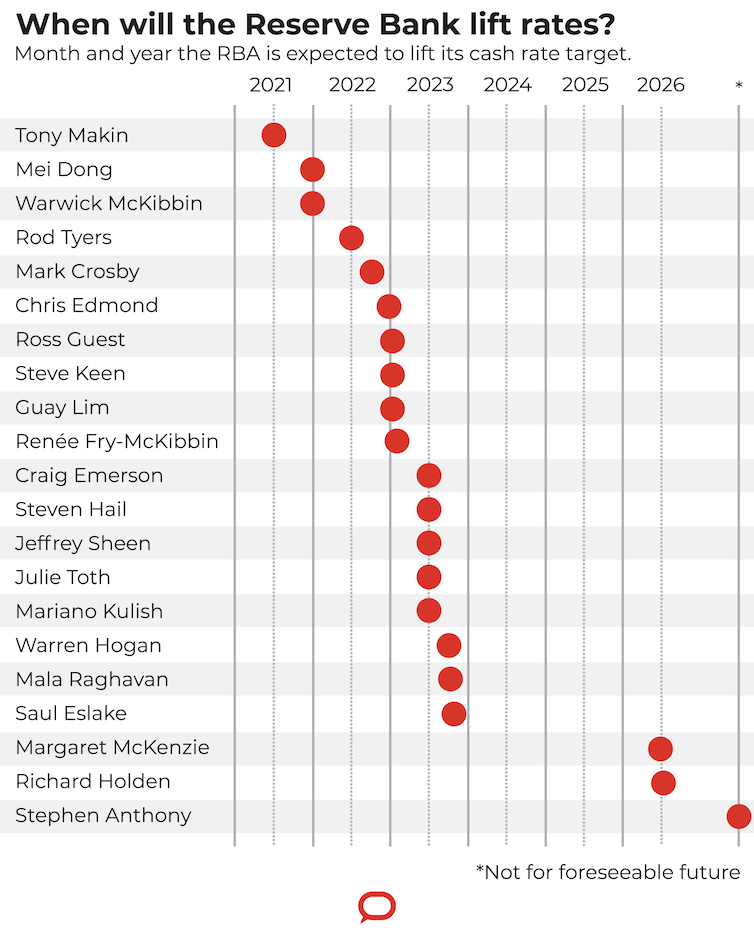 The Conversation, CC BY-ND Panellist Mark Crosby says rising home and other asset prices will put the bank under pressure to backtrack on its commitment in the knowledge that the economy is in a position to withstand more normal rates. Long-term interest rates are already higher than they were at the start of this year. The panel expects the ten-year benchmark used to set the rates at which the government can borrow to gradually climb from last year’s all-time lows. Asset prices Sydney home prices are expected to climb 4.9% after climbing 2.7% in COVID-hit 2020. Melbourne prices are expected to climb a lesser 4.4% after slipping 1.3%. Saul Eslake says Melbourne’s economy has been far more reliant on interstate and international migration than any other part of Australia and has damaged its image as a desirable destination by its handling of the pandemic. Other panellists draw a distinction between apartment price growth, which should be weak because of lower demand for international student rentals, and freestanding home prices which should be supported by an implicit Reserve Bank guarantee of three years of ultra-low interest rates. The panel expects housing investment to climb 3.8% after falling 5% during the first nine months of 2020. The Australian share market collapsed 37% in just over a month in the early weeks of the coronavirus crisis and spent the rest of 2020 recovering. Although opinion is split about 2021, the panel’s average forecast is for growth of 3.5% Panellist Mala Raghavan says low interest rates are forcing long term investors to take positions in companies with strong fundamentals. Craig Emerson says he expects the equities bubble to burst at some point, but probably not while low interest rates continue. At US$160 a tonne, the iron ore price has almost doubled since the start of 2020. On balance the panel expects it to ease to US$133 throughout 2O21, noting that at some point Brazil is going to return to full production after a series of dam collapses and pandemic-related problems. China is thought to prefer to buy from Brazil. Business The panel expects Australian businesses to find any lift in the share market and consumer spending uninspiring. After collapsing 24% in the first nine months of 2020 the panel expects non-mining business investment to climb by only 2% in 2021 and 3.1% in 2022. It cites low immigration and uncertainty over COVID and the shape of new business practices as more important in determining investment decisions than the government’s generous tax incentives. Government The panel’s central budget deficit forecasts are not too far from the latest government forecasts released in December at A$192 billion in 2020-21 and $114 billion in 2021-22. Panellists note that the government will have little opportunity to restrain spending in the lead up to the election and will be under pressure to boost the JobSeeker unemployment benefit which is due to sink back to its pre-COVID level on April 1.