Myanmar has once again returned to military rule, with a year-long state of emergency declared by the army.

When military dictators ruled Myanmar from 1962 to 2010, they were able to maintain tight control over the people through the country’s extensive intelligence apparatus and harsh tactics such as imprisonment, torture and mass killings. As a result, Myanmar’s people lived in virtual silence for decades.

After a decade-long political transition that brought Aung San Suu Kyi’s National League for Democracy (NLD) to power, Myanmar is now a changed place. What used to be a pariah state is increasingly connected to the world. Civil society has begun to be established and public awareness about freedom, democracy, human rights and development has increased drastically.

Given this, many are closely watching how people will react to the military taking back control of the country and tossing aside a government that won a massive popular mandate only a few months ago.

Already, we are seeing signs of non-violent protests and civil disobedience against the coup, particularly on social media. At least one public protest has also been reported in Myanmar’s second-biggest city. For the military, maintaining “social control” may not be as easy as it was before. 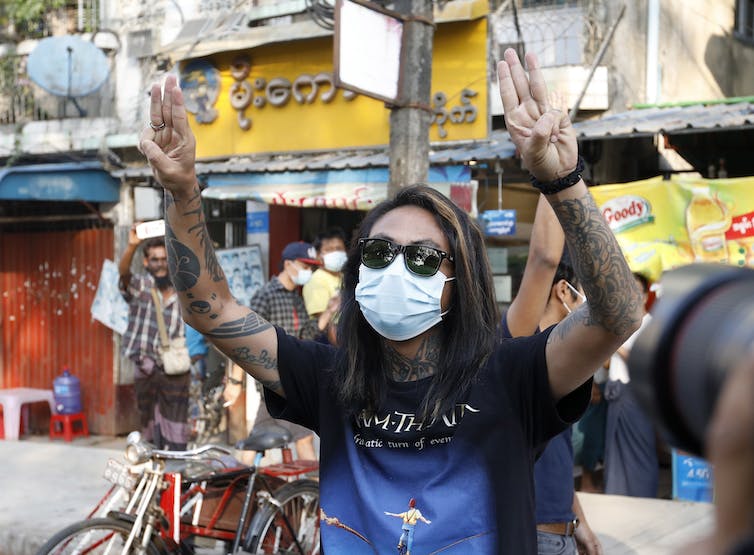 Resistance to the coup has occurred mainly online, though sporadic protests are popping up on the streets. NYEIN CHAN NAING/EPA

The internet and social media undoubtedly shape social interactions and everyday life today in Myanmar — a massive change from even just a decade ago when SIM cards for mobile phones cost over US$1,000.

Today, around 90% of Myanmar’s 54 million people have access to a phone with internet connectivity, and according to one estimate, nearly 22 million people use Facebook as their primary source of online news and information.

However, the ubiquity of social media has not guaranteed freedom of expression. In fact, in recent years, it has gotten worse.

Under the country’s former dictatorship, a vast intelligence apparatus underpinned the military’s rule. Indeed, the country could best be described as an “intelligence state”. 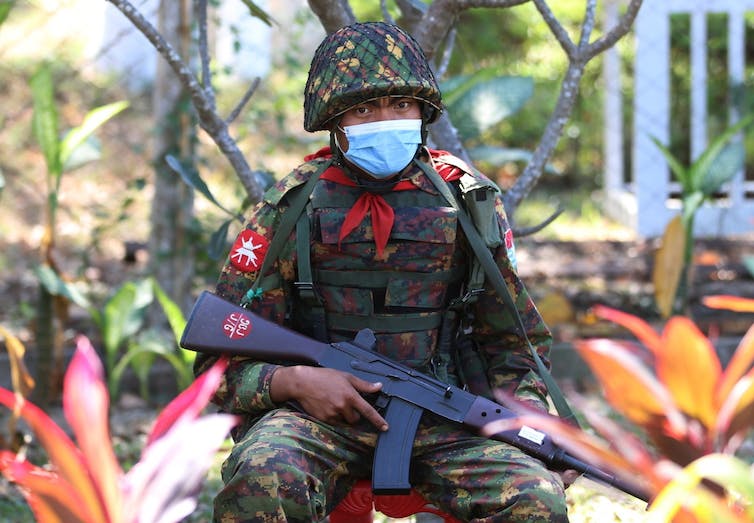 A soldier guards the guest house where newly elected parliament members were being detained this week. MAUNG LONLAN/EPA

This did not substantively change when Suu Kyi came to power as the country’s de facto leader in 2016.

The dramatic increase in the use of mobile phones and the internet, for instance, allowed the authorities to use widespread digital surveillance to maintain social control. And in 2018, the president’s office formed a team of social media monitors, whose work some opponents have questioned.

The NLD also did not liberalise the media. In fact, media freedom surprisingly was not a priority for the party. Journalists have been jailed, arrested and harassed in recent years, and hundreds of news sites have been blocked, ostensibly for spreading “fake news”.

Moreover, the state maintains control over the leading broadcasters and publications and a monopoly on telecommunications.

Given this, the military leaders were quick to order local telecom firms to temporarily block Facebook following the coup, while the Myanmar state broadcaster, Myanmar Radio and Television (MRTV), has beamed out military propaganda for the first time in years.

Laws cracking down on free speech since 2010

In addition, the military already has in place numerous laws to enforce social control. For example, the controversial Telecommunications Law, passed in 2013, empowers the government to temporarily suspend and restrict telecommunication services and collect data from people.

It also makes defamation a criminal offence, which has been used numerous times in recent years for criticising or insulting the government and military. One youth activist described the chill this has caused:

It makes us censor ourselves. It creates fear in the youth community. We are still living in fear.

Those wishing to hold an assembly or protest must also adhere to the Peaceful Assembly and Peaceful Procession Law, passed in 2011. Demonstrators have been arrested for failing to comply with the law or violating the vaguely phrased limits placed on speech by the statute.

Section 505(b) of the penal code is another overly broad law that prohibits speech that may cause “fear or alarm in the public” and lead others to “upset public tranquillity”. The law has long been used to curtail speech critical of the government. Even monks holding sit-in protests have been targeted. 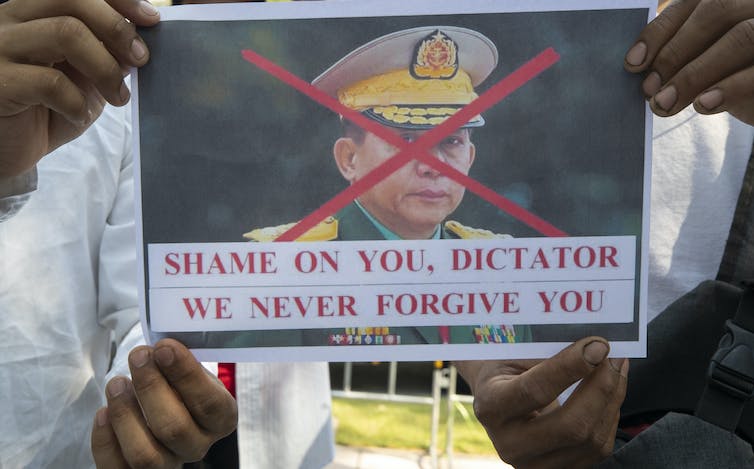 The most visible protests against the coup have occurred outside Myanmar, such as this one in Thailand. Sakchai Lalit/AP

Despite these draconian laws and state repression, young people have embraced nonviolent movements and campaigns to challenge the military’s rule in the past.

And public defiance is already being seen following this week’s coup. For instance, people have honked car horns and banged pots and pans to “drive out” the military in the same way they scare evil spirits from their homes.

Several organisations are releasing statements on social media condemning the coup, while many NLD supporters are turning their Facebook profiles black or replacing them with a red portrait of Suu Kyi.

Civil disobedience and boycotts are also gathering steam. Health workers at 70 hospitals and medical departments boycotted work this week, while others are tweeting images of red ribbons, the campaign’s symbol of resistance. 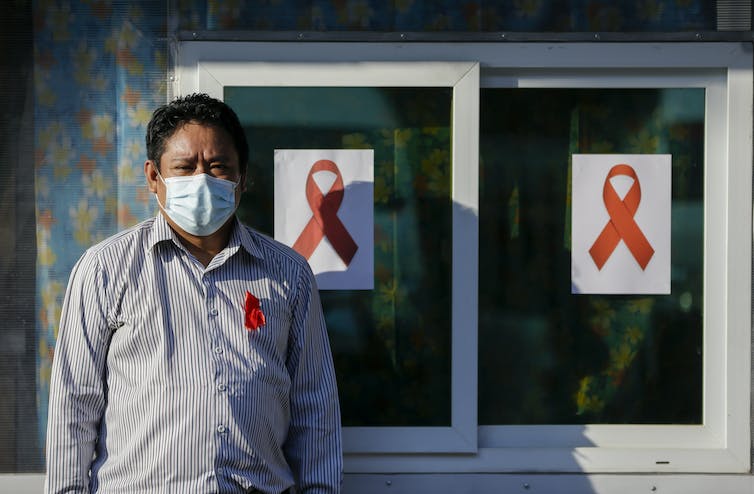 One of the doctors participating in the nationwide strike this week. LYNN BO BO/EPA

And in the capital, about 70 recently elected lawmakers convened a symbolic opening of the new parliament at a government guesthouse.

The huge Myanmar diaspora can also become a powerful resistance group worldwide. This week, migrant workers protested against the coup in Thailand, chanting “Shame on you, dictator”“. Similar protests have taken place in Japan, Australia and Canada.

The diaspora was effective in the past in bringing visibility to the harsh rule of the dictatorship in Myanmar and helping rally global support behind Suu Kyi.

Although the military rulers violently cracked down on nonviolent protests on many occasions in the past, including the famous Saffron Revolution of 2007, they failed to crush the people’s aspirations for democracy and justice. 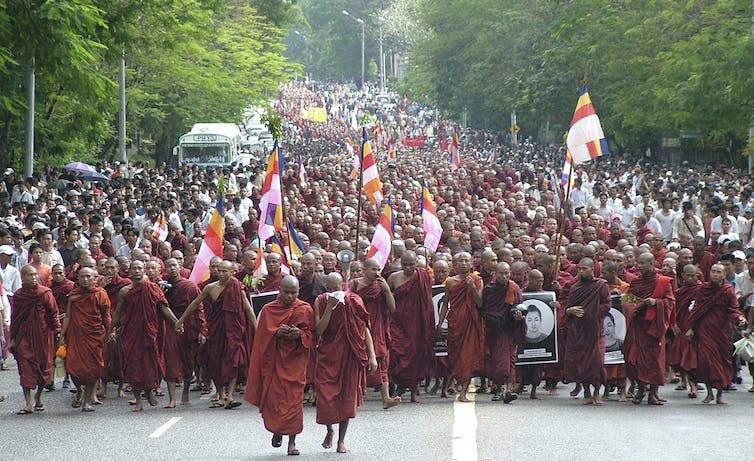 Led by monks, as many as 100,000 anti-government protesters marched during the Saffron Revolution. The military responded with a harsh crackdown. AP

As the public defiance this week illustrates, the people of Myanmar are refusing to be silenced again. Because their actions appear to be spontaneous, however, it remains to be seen how effective a longer-term resistance campaign will be in the face of the state’s sophisticated surveillance apparatus.

This will require organisation and leadership on the ground. And with the detention of Suu Kyi, as well as scores of other activists, lawmakers and other NLD officials, the opposition may struggle to replace the central command needed to lead protesters in this way.

The international community will also need to continue to support the pro-democracy activists and put pressure on the military leaders, particularly as the initial outrage over the coup subsides.

The public has demonstrated its resilience before. They’ll need to show bravery and determination again to make the military feel vulnerable in its claims of legitimate rule.