There’s something odd about those television and internet advertisements telling us we are getting more super.

The money seems to come from nowhere.

“Pretty soon,” explains the woman getting onto an escalator, “the amount of super paid on top of our wages will go up”.

Fair enough, but the increases in compulsory super contributions will come out of the same bucket as wages – so-called on-costs which employers use to pay wage cheques, workers compensation, payroll tax, employees pay-as-you-go tax, and employees super contributions, which is also known as the “super guarantee”.

The ad is a bit like those promising buyers of mobile phones the “free gift” of an accessory. It has to be paid for somehow, and it’s usually out of the purchase price.

Paul Keating, prime minister when compulsory super was introduced in 1992, put it this way in a reflection on the history of modern superannuation in 2007

the cost of superannuation was never borne by employers. It was absorbed into the overall wage cost

Last year’s retirement income review examined every study that had ever been conducted on the topic and concluded that the “weight of evidence suggests the majority of increases in the super guarantee come at the expense of growth in wages”.

A more informative advertisement would have referred to super “paid on top of our wages, at the expense of our wages”.

The ads are funded by Industry Super, which represents the big funds that want to manage the extra super. There’s no reason for them to tell the whole story.

Source: Australian Tax Office They’re the start of a campaign to get the government to actually deliver the five legislated increases of 0.5% of salary starting in July that are scheduled to take compulsory super from 9.5% of salary to 12% over five years, and they are about to get more aggressive. An extra half a percent of salary into super each year for five years culminating in an extra 2.5% would be a big ask at any time, but in the present circumstances it is worth considering how a COVID-affected employer might respond. That employer has choices. It could shave each of the next five annual wage increases so that it won’t end up paying out more than it would have. Or it could eat into profits (which is difficult if it is barely surviving), or attempt to put up prices (which is also difficult at the moment) or it could shave its wage bill by letting go of staff. Read more: Australia's top economists oppose the next increases in compulsory super: new poll In normal circumstances the first is the most likely, although in the circumstances we are in, and given the scale of the increases proposed, economists don’t rule out some of the last - letting go of staff. The less employers expand employment or the less they increase wages, the less will be spent on their products, giving them even less money for wages. Household saving is already at unprecedented highs. Most of us save enough, some too much These downsides might be worth putting up with if we needed the extra super, but the November retirement income review found that – to the surprise of some – we don’t. High earners have always saved enough for retirement, originally outside of super and now inside of it, making very large extra contributions on top of what’s compulsory in order to take advantage of the tax benefits. Low earners earn so little while working that the cocktail of super, the pension and private savings gives them about as much or more per year in retirement as they got while working, albeit partly funded at the expense of wages while they are working. Read more: Home ownership and super are far more entwined than you might think The review found that if the increases in compulsory super proceed as planned, the bottom one third of retirees will get more than they got while working. International benchmarks suggest most non-renters need only 65-75% of what they got while working, because they face far fewer of the costs they faced in their working lives including paying off a home, saving for retirement, raising and educating children, and commuting. If the legislated increases in compulsory super go ahead, an astounding two-thirds of Australian retirees will get more than that benchmark. They will have been enriched in retirement at the expense of their living standard while working. 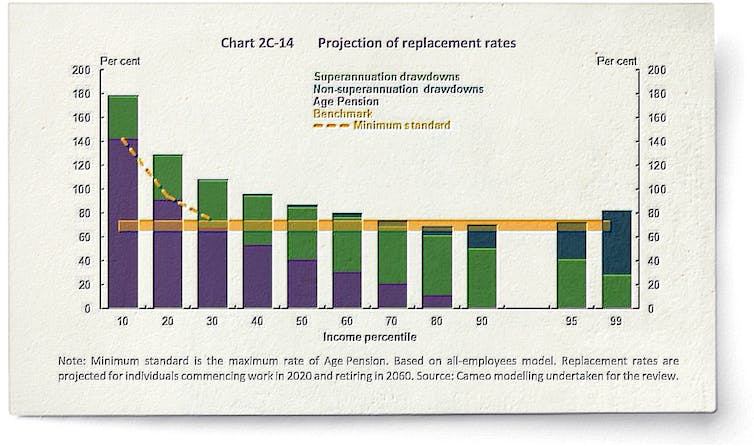 Retirement Income Review So where does the target of 12% salary locked away in super come from? You might be forgiven for thinking it was adopted after an independent review, and you’d be partly right. The 2009 retirement income system review conducted as part of the Henry Tax Review examined the right amount of super and concluded that “the superannuation guarantee rate should remain at 9 per cent”. Yet as the review’s final report endorsing that conclusion was being released on May 2, 2010 Prime Minister Kevin Rudd and Treasurer Wayne Swan announced that “the superannuation guarantee will be gradually increased to 12 per cent, implying that decision derived from the review. 12% is not what was recommended It didn’t derive from the review, but the hubbub over the mining tax announced at the same time meant that few people noticed. The best thing to do would be to abandon the 12% target. It’s neither something we need nor something that would help us at the moment. But if the super lobby makes that hard, I’ve another idea. It’s to allow the increase to proceed - an extra 0.5% of salary from each employer per year, amounting to 2.5% of salary after five years - but to give workers the option of having it directed instead to their wage account. For an employer, it’ll make no difference which account it goes to. For Australians short of income at the time they need it, and an economy needing wages and spending, it might make a difference.