The giant prehistoric Carcharocles megalodon (or Otodus megalodon for some researchers) was the largest predatory shark to ever swim in Earth’s seas. Scientific evidence points to megalodon having lived between 16 million and 2.6 million years ago, going extinct at the end of the Pliocene Epoch when the world’s oceans were much colder than today’s.

Reconstruction of a 16m megalodon. Illustration by Oliver Demuth/Jack Cooper

Over the years, several research papers have estimated meg’s size. Its teeth are shaped like large, flat triangles with serrated edges — much like the teeth of living white sharks. White sharks, along with mako sharks and the porbeagle shark all belong in the family Lamnidae and are referred to as “lamnids”.

The close similarities between meg teeth and those of living lamnid sharks are strong evidence meg was indeed an ancient kind of lamnid shark. This premise is important, as it forms the basis of how we estimate the size of this ancient giant.

Two museum exhibits recently opened public displays featuring spectacular models of megalodon: one at the Smithsonian Museum of Natural History in Washington DC, and the other at the Western Australian Museum Boola Bardip in Perth.

These models, while both outstanding, don’t depict entirely the same shark. So how was each one made? And what scientific approaches were used?

The Smithsonian’s megalodon model is a full-body reconstruction measuring 15 metres. The other, at the Museum Boola Bardip, is a beautifully crafted model of meg’s head. This was built under the direction of one of us (Mikael) and opened to the public in November.

The shape of the “meghead” is similar to a white shark’s head, but has a shorter and much rounder snout. Its colouration features “counter-shading” with a dark back and lighter belly — also similar to white sharks, but less contrasted. The greater this colour contrast, the easier it becomes for underwater predators to go unnoticed by prey.

The meghead’s jaw size was based on multiple teeth from a single ancient shark. These specimens allowed us to scale the body size to correspond with tooth size, as well as to match the widest front tooth of another megalodon found in Cape Range, Western Australia.

The rest of the meghead was then 3D modelled to fit the jaws. The end result was a head that corresponded to a creature roughly 14m in length. This would be the largest meg shark ever found in Western Australia, but not the largest overall. 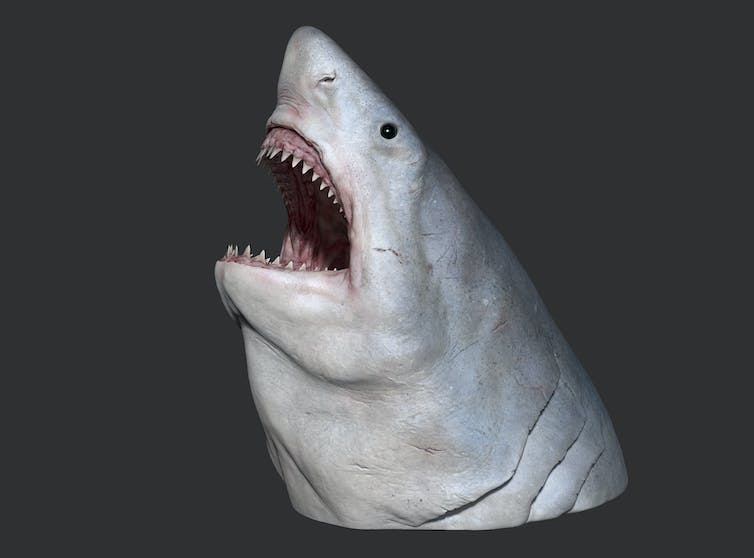 The Smithsonian meg model was overseen by Hans Dieter-Sues, a US paleontologist who drew the shark’s outline based on a general lamnid shark body plan. This was then finessed by University of Maryland shark fossil expert Bretton Kent.

After reviewing a small scale model, the full-size model was constructed based on a complete set of meg teeth assembled by Gordon Hubble, another megalodon expert. Measuring a whopping 15m, the final model had to be assembled as modules, as it wouldn’t have made it through the museum’s doors or corridors in one piece.

This model is now suspended by cables from the Smithsonian’s walls and ceiling, positioned strategically so visitors may take selfies from a nearby balcony. 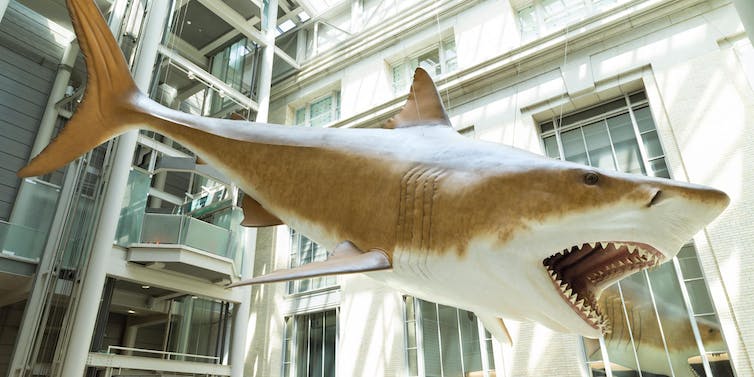 The meghead model in Perth was based on several specific tooth specimens found locally and from overseas, painting a picture of a 14m-long predator.

However, to calculate the species’s maximum size, we first estimated the maximum jaw size possible for Meg and then scaled this up, using the same jaw size-to-body length ratio of living white sharks.

The maximum jaw size of meg can be calculated by scaling up the few known “associated dentitions” (multiple tooth specimens that were found together and came from a single shark) with the widest meg tooth ever found.

Once we did this, the size estimate we reached was between 19–20m. And this is much larger than most other recent estimates.

Scientists have discovered meg’s teeth to be part of a species continuum known as the megatooth shark lineage. This is based on the discovery of many thousands of fossilised teeth that seem to merge into new shapes over time, pointing to the evolution of new species. 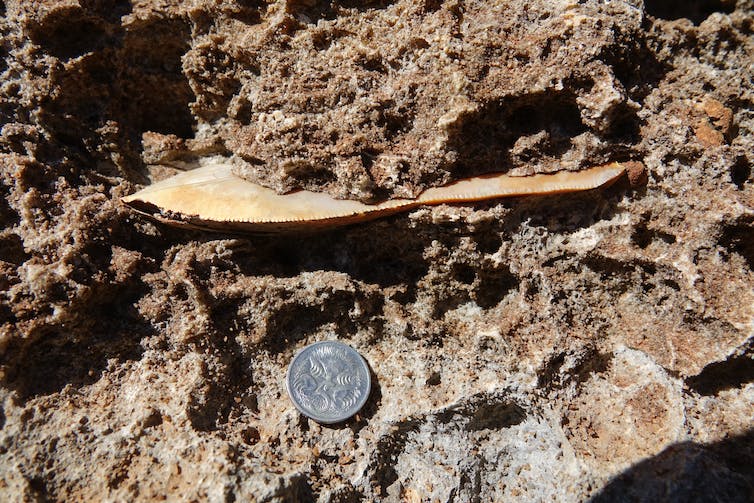 The start of this lineage began in the Danian stage about 63 million years ago, when the first sharks of the genus Otodus appeared. This is why megalodon, belonging to this lineage, is now officially classified as Otodus megalodon. That said, the shark has been placed in various genera, including Carcharocles and Procarcharodon, and continues to be the subject of debate.

With an estimated body length of about 4m, the first Otodus sharks in the megatooth lineage would have been smaller than several other sharks living at the time. So how could they have evolved to become the colossus that is meg?

DePaul University professor Kenshu Shimada has suggested meg’s huge size may have had something to do with a strange trait of lamnid sharks, which is that their young eat each other in the womb.

This behaviour, called “intrauterine cannibalism”, provides a ready source of nutrition for growing fetuses and may have driven increased growth in megalodon. That said, it would have also forced mothers to feed more actively, due to increased nutrition demand from the rapidly growing young.

This wouldn’t have helped meg’s survival when global temperatures cooled down about three million years ago. The cold spell would have killed off much of meg’s food sources, eventually triggering its extinction.

In recent years, coastal limestone outcrops in Western Australia have yielded several new exciting megalodon teeth. We hope these will tell us more about the story of meg and its variations which swam through the seas of ancient Australia.

Read more: Giant ancient sharks had enormous babies that ate their siblings in the womb