If the faster part of human evolution is over, and squids and octopuses continue to evolve, could there be an apocalypse where the cephalopods take over the world?

If they continue to get smarter, octopuses would be much more suited as conquerors of Earth because they could live nearly anywhere. They have abilities similar to what we would call superpowers: they can fit into any hole that fits their beak, they can camouflage, they can regenerate their lost limbs and more. If and when they eradicate humans, they would be better suited to space travel. In orbit, they could manoeuvre much more easily and fit in smaller spaces.

So if they simply started evolving a smarter brain, what stops all this from happening? Why has this not happened already? Why have so few creatures evolved an intelligent brain?

As Michael points out, octopuses are famous for their alien-like abilities, from regrowing damaged arms to changing their skin colour and texture. They use this colour-shifting power to camouflage and, interestingly, as a strange visual language to talk to other octopuses.

A little known fact is they actually belong to a category of animals (phylum) called Mollusca, which is largely made up of snails. Yep, octopuses are like souped-up snails who lost their shells and grew a rather large brain. The coolest thing about them is their intelligence, which evolved completely independently from our own.

An octopus escapes a boat through a tiny hole.

They use tools to solve problems (like us) and they can open child-proof containers (not always like us). And just last week, research found a cuttlefish (another cephalopod, cousins of octopuses) passed an intelligence test designed for toddlers that showed they have advanced self control.

Humans no doubt have a lot more to learn about what these mysterious creatures are capable of. But what we do know can start to answer Michael’s excellent question: could octopuses one day rule the world?

(Before we go further we should state the plural of octopus is “octopuses” — not necessarily “octopi” — given the word has Greek rather than Latin routes.) 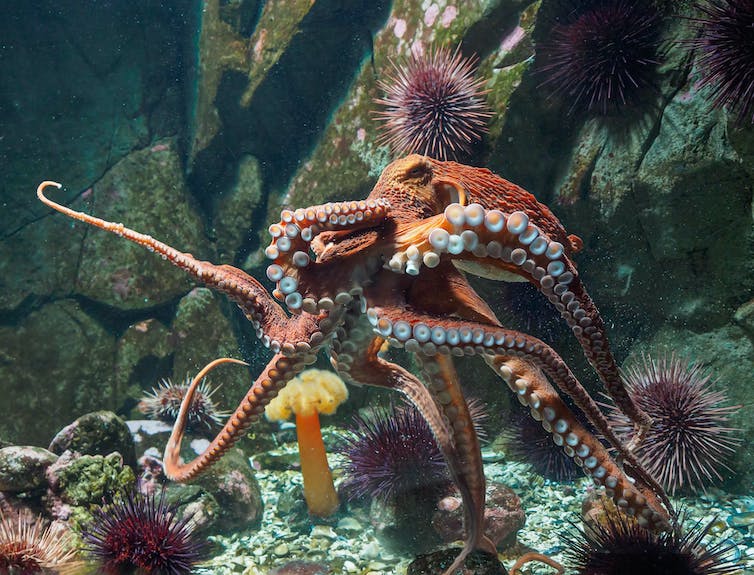 The giant Pacific octopus can grow to almost five metres across. Shutterstock

Let’s first consider their nervous system. Like us, octopus have large brains compared to their body size – easily the biggest of all invertebrates (animals without a backbone) and of comparable size to many vertebrates, such as frogs.

It is, however, hard to compare brain size between marine animals and land animals, because the laws of physics differ in water and air. Animals are weightless in water but on land body shape and size is limited by gravity.

An octopus brain is made up of about 500 million brain cells (neurons). This is seven times more than a mouse and about the same as a marmoset monkey. Humans, on the other hand, have 86 billion brain cells.

An octopus changing colour and texture.

Testing octopus intelligence can be a problem, because the animals frequently outsmart scientists. For example, scientists can struggle to get an octopus to solve a maze, because they often climb out and crawl over the top to reach their food reward. And that’s assuming they haven’t already escaped from their aquarium home and are crawling around the lab.

Unlike us though, octopuses don’t live for very long. The giant Pacific octopus might live up to five years, but most live for just a year and some as little as six months. They hatch from eggs fully formed and ready to go. They never see their parents and have to learn everything on their own.

So yes, octopuses have big brains and are crazy-smart. But could they take over the world if they kept evolving?

Why they evolve so slowly

Compared to other species, octopuses actually evolve really, really slowly. There are about 300 different species of octopus, which have been around for at least 300 million years. In that time, they haven’t changed much.

Modern humans, by comparison, have only existed for 200,000 years and in that time, have taken over the planet (and badly damaged it in the process). 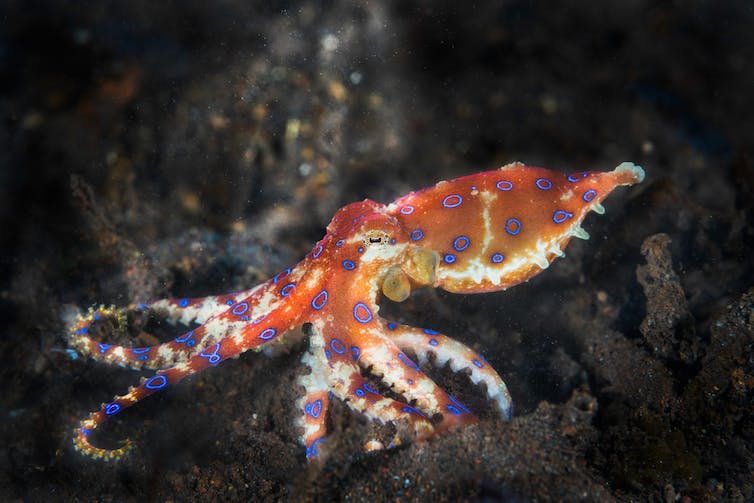 Evolution occurs when the DNA code is gradually changed in small steps over vast amounts of time. But octopus have a unique method of actively editing their RNA molecules instead. RNA are messages sent from DNA, which tells genes what to do and when.

The ability to edit RNA means they can adapt quickly to new problems, bypassing the need for long-term changes to occur in the DNA — the standard evolutionary process most living things follow. Scientists think this rule-breaking approach may be a reason why octopuses evolve so slowly, and why they are one of the brainiest beasties in the ocean.

Read more: Octopuses can defy their genetic instructions – and it's slowed down their evolution

But lets face it. Despite all their tricks, octopuses are still working from a snail blueprint, and there’s only so much you can do with that toolbox. They are also highly constrained by their very short life-span.

So, the first item on an evil octopus to-do list for taking over the world is to live well beyond your first birthday. Second on the list might be to develop “cumulative culture” by learning from others like humans do. We already know an octopus can learn by watching other octopuses, but as yet we don’t have evidence of culture.

Very few creatures display intelligence comparable to humans and understanding why is a long-standing scientific question. The most likely explanation is that brain tissue is extremely expensive to maintain, in terms of energy required to keep brain cells firing. So there need to be big benefits to justify the expense. 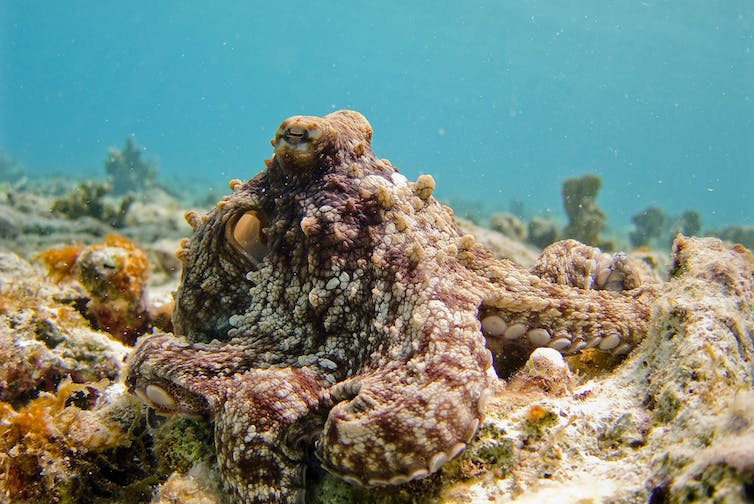 Scientists think one benefit of having a big brain is so humans can keep track of complex social relationships (octopuses, on the other hand, are soliltary) and develop culture. Nature tends to provide animals with just enough smarts to get by, and nothing more.

Its hard to imagine an octopus ever evolving to take over the land. Octopus have no hard parts other than their beak. So while they can move on land, with no bones to hold them up against gravity, they really struggle.

They also have gills which need water to pass over them to breathe. Strangely, they can also “breathe” using their skin. When resting, about 40% of their oxygen comes from the water passing over their skin rather than their gills. Trouble is that only works while the skin is wet.

But because they live in water and octopuses are neutrally buoyant (they neither float nor sink), gravity is largely irrelevant. This means they would do rather well in space where there’s no gravity — assuming they could take water with them.

In short, octopuses are very intelligent animals and one of the smartest creatures in the ocean. But their short life span and vulnerabilities on land are serious handicaps when it comes to taking over the world.

The Conversation, for one, welcomes any new cephalopod overlords