Attorney-General Christian Porter is suing the ABC for defamation and claiming aggravated damages.

Porter is claiming that an article published last month included false allegations against him in relation to a historical rape. A statement from his lawyer says although Porter was not named, the article made allegations against a senior cabinet minister “and the attorney-general was easily identifiable to many Australians”.

So, how does defamation law work, what is its impact on the media, and why has Australia been labelled the defamation capital of the world?

What is considered defamatory?

Defamation can be defined as a false statement about a person to their discredit. The legal action has three elements for the complainant to prove: publication, identification, and defamatory meaning. Significantly, the falseness of the published material is presumed.

Publication is broadly defined, including any communication to someone other than the complainant, whether written or spoken.

And identification requires reference to the complainant, which could be indirect if the ordinary, reasonable reader is able to read between the lines — as Porter is claiming in his case.

Read more: View from The Hill: Despite his denial, Christian Porter will struggle with the 'Caesar's wife' test

A news organisation might carefully avoid naming a person, as the ABC did, but it could still be liable if a reader would have known who that person was. Porter was named in social media chatter around the ABC’s story - whether that sort of speculation constitutes identification is questionable, but not inconceivable.

Where a complainant’s identity is confirmed after publication — as Porter’s was when he fronted the media two weeks ago — identification becomes straightforward for later downloads of the story. Each download is treated as a separate potential defamation under the law. At the time of writing, the ABC’s report was still on its site.

The elements of defamation are encapsulated in the expression cherished by news editors:

journalism is printing what someone else does not want printed.

This reflects the reality that the media is exposed to defamation risk daily — and the risk is serious.

A complainant can sue any person involved with the story’s production, such as journalist Louise Milligan in the ABC’s case. Add the fact the complainant doesn’t need to prove any harm was actually done — and aggravated damages awards are uncapped — and it’s easy to see why defamation inspires fear among media organisations.

What defences can media organisations use?

The defences to defamation are notoriously difficult to establish.

While the complainant need not prove the material is false, the defendant can escape liability by showing that it’s true. In the Porter case, this means the ABC would need to prove matters from more than 30 years ago raised in a letter by a woman who is now deceased.

Moreover, the defendant must prove the truth of the “defamatory stings” — the discrediting imputations that an ordinary, reasonable reader would take from the published material, regardless of whether those were the intended meanings.

Even proving the truth of ordinary, factual reporting can be challenging in cases where journalists’ sources, such as whistleblowers, have legitimate reasons to preserve their anonymity.

These difficulties might be ameliorated if Australia had a “reportage” defence, like that of the United Kingdom. This defence excuses the media for reporting defamatory statements by third parties on matters of public interest, provided the media has merely reported the statement without adopting it.

Australia does have a “reasonable publication” defence, but its requirements have proven near-impossible for media organisations to satisfy in court.

For example, the defence is probably a non-starter in cases where a news organisation reports unproven criminal allegations and the person of interest, being unnamed, is given no right of reply in the story. 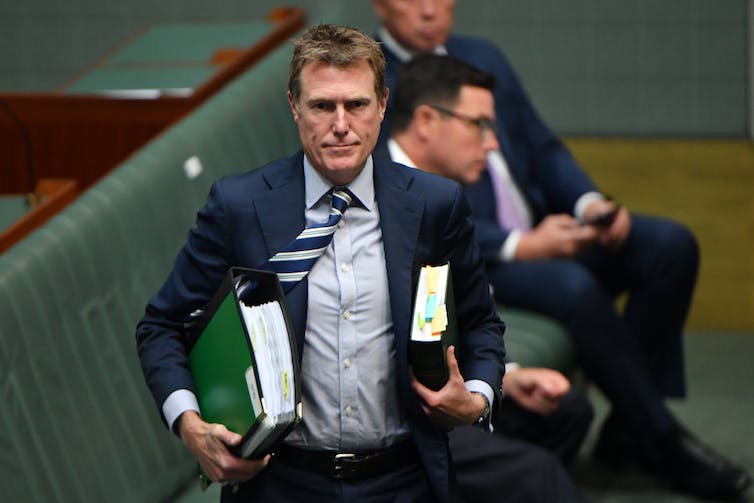 Porter has strenuously denied the historical rape allegations against him. Mick Tsikas/AAP

Changes to Australia’s defamation law are in the works. Some will help potential defendants, such as a new threshold of serious harm and tighter time limits for bringing actions.

Other reforms will require a wait-and-see approach, like the new public interest defence, which aims to rebalance defamation law in favour of public interest reporting but retains elements of the old reasonable publication defence.

This leaves room for courts to maintain a tough stance on what is regarded as “reasonable” media conduct when it comes to defamation. That stance recently saw NSW courts hold three Australian media companies liable for comments that were posted on their Facebook pages about a former youth detention detainee.

Read more: Australia's 'outdated' defamation laws are changing - but there's no 'revolution' yet

More meaningful reform might have established stronger public interest and reportage defences, or required complainants to prove that the material published about them was false - or even that the publisher knew it to be false but published it anyway.

Defamation cases involving public figures in the United States require proof that the publisher knew the material to be false, which is why US politicians almost never sue for defamation.

In Australia, by contrast, politicians do sue – and successfully. They often opt for the Federal Court where, compared with the state courts, they are likely to have their matter heard by a judge alone, rather than having to convince a jury of the merits of their case.

Citizens and institutions seeking to hold those in power to account are too often being silenced by our current defamation laws. In a strong democracy like Australia, we can — and must — do better.