Two new films explore the fear of forgetting, loss of control, and other complexities that accompany a dementia diagnosis. The Father and Supernova, both released this month, grapple with the challenges confronting people living with dementia and those who love them.

We watched these films through our lenses as a clinician and a neuroscientist. The different causes and conditions that make up the umbrella term of dementia mean the experiences of people living with it — and their loved ones — can differ widely. These films illustrate this well.

Read more: Why people with dementia don't all behave the same

Marching through the brain

Because different parts of the brain control different functions, the type of dementia is defined by its pathology, origin in the brain and progression.

In Supernova, directed by British filmmaker Harry Macqueen and starring Colin Firth and Stanley Tucci, we see a fairly accurate representation of frontotemporal dementia. Specifically, this is the type where certain language skills are impaired, known as semantic dementia.

The Father, meanwhile, directed by French playwright Florian Zeller and based on his play of the same name, centres on a protagonist, Anthony (played by Anthony Hopkins), with Alzheimer’s disease, the most common cause of dementia.

Owing to the neurodegenerative nature of dementia, people with this diagnosis experience a progressive deterioration of memory, thinking and behaviour, and gradually lose the ability to perform daily tasks and other physical functions, ultimately leading to death.

‘I don’t need her or anyone else. I can manage very well on my own.’

Both films accurately reflect many of the key early features of these forms of dementia and provide insight into the varied presentations and issues associated with the conditions.

Whereas The Father focuses more heavily on the experience of the individual living with dementia, Supernova gives more attention to shared grief and loss.

Read more: Alzheimer's could be diagnosed and treated before symptoms occur

In Supernova, Tusker (Tucci) and Sam (Firth) take a roadtrip through stunning northern England. We soon learn the journey is as much an adventure to visit Sam’s family, as it is an exploration of their own mortality.

“You’re still the same person, Tusker,” says Sam. “No I’m not, I just look like him,” his partner responds.

Unlike many other illnesses, those living with dementia frequently show no outward physical signs of their condition until late in its course, and Tusker appears in good physical health.

We witness Sam’s panic when Tusker and their dog Ruby go missing. Impulsivity and spatial disorientation are common phenomena experienced in dementia. Later, Sam masks his distress (as carers often do), attributing his tears to cutting an onion while preparing dinner.

‘Can you tell? That it’s gotten worse?’

Dementia is a condition that affects the person progressively and globally; we initially only see subtle symptoms of Tusker’s language loss, for example, when he can’t find the word “triangle”. Later we note his loss of instrumental function: needing two hands to guide a glass to his mouth, negotiating which arm goes into which sleeve while dressing. Sam tenderly maintains Tusker’s dignity while helping him dress.

When Sam finds Tusker’s notebook, the writing in it has deteriorated across the pages to an indecipherable scrawl. The last pages are blank.

Tusker declares he is dying — dementia is a terminal illness — but how long he has left is unknown. The median time from dementia diagnosis to death is five years. For a previously high-achieving person like Tusker, the loss of his cognitive ability feels more profound to the viewer.

While The Father may appear to be an imagined horror story, it masterfully presents the disorientating and frightening reality for a person living with dementia.

Anthony is a powerful and compelling character who draws us into his internal chaos – unaware that he is losing his sense of self in place and time. We learn he has been an engineer and father of two daughters, and lives in a comfortable dwelling in a leafy London suburb. He is by turns irascible and charming. Like Tusker, he appears physically fit, well-groomed and fed.

The early narrative tension revolves around Anthony refusing home help. He denies verbally abusing a recent carer and accuses her of stealing his watch; when this is shown to be false he shows no insight or remorse. Those living with dementia may strive to make sense of things they cannot remember by imaginatively filling in the gaps.

People with dementia are altered by the disease, but it’s important to remember that who they are as a person still endures. IMDB

Seeing the world through Anthony’s eyes is a masterful plot device as we the viewers are not quite sure of what is “real”. At some early points we wonder if Anthony is being abused or gaslighted as we are drawn into his perceptions; later we learn that the lens through which we see Anthony’s world is distorted, but a terrifying reality to him.

Like all of us, Anthony is capable of harshness and tenderness, of charm and cruelty. Those experiencing dementia often have diminished control over their emotions and behaviours and this can be exacerbated by stress.

A small weakness of the film is that we gain no real sense of Anthony’s earlier life. Anthony’s temper may indeed be an enduring part of his personality, though it’s more likely a consequence of his serious disease. This is an important point for carers to understand. When his son-in-law challenges him to stop “getting on everyone’s tits” we have some sympathy for Anthony, who we begin to realise is behaving fearfully rather than deliberately.

Eventually Anthony is reduced to sobs: “Lost all my leaves. Branches. Wind. Rain”. As he moves from the moderate to advanced stage of dementia, the need for tender and humane care is clear. 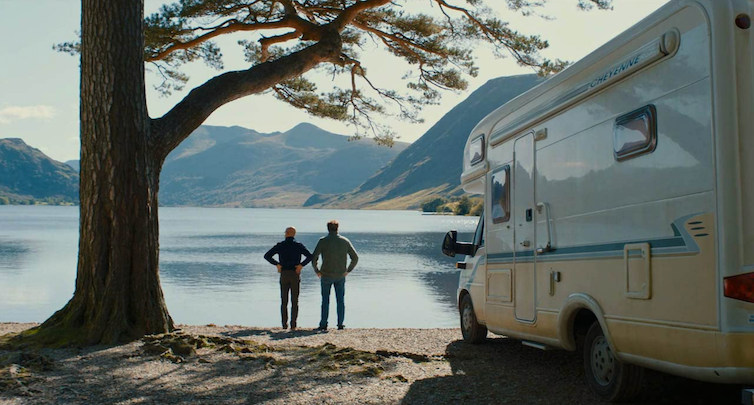 Dementia means a shared loss for couples like Supernova’s Tusker and Sam. IMDB

Read more: We all hope for a 'good death'. But many aged-care residents are denied proper end-of-life care

A key theme with many films exploring dementia, is the end — not just the end of the story, but the end of life.

In The Father we are drawn into Anthony’s agonising reality, the quiet chaos of tomorrow. In Supernova, we understand that Tusker chooses to write the end of his own story. Individuals living with dementia may be altered by the disease process, but it’s important to remember that who they are as a person endures.

The nihilistic vision of these films, while powerful and thought-provoking, is not the only possible construction of dementia. Though we must come to terms with the fact that dementia is a terminal disease, the end point does not negate the imperative to respond to the needs of the person; indeed, it highlights the need for empathy.

The Father is in cinemas now. Supernova opens in Australian cinemas from 15 April.