Many cities in Australia and around the world have recently made or proposed investments in new light rail systems. They often do so in the belief this will not only increase public transport use, but also lead urban renewal and improve a city’s global image. However, compared to light rail, my research shows a system of buses running along dedicated corridors, known as bus rapid transit, has many advantages for Adelaide (the focus of my research) and cities like it.

In contrast, retrofitting light rail onto arterial roads has proven expensive, slow and highly disruptive. For example, 12.5km of arterial-based light rail in Sydney cost over A$150 million per kilometre and took more than five years to complete. Given these inherent problems, Australian cities such as Adelaide with new light rail systems on the drawing board should first take another look at bus rapid transit.

Read more: Trackless trams v light rail? It's not a contest – both can improve our cities

Most Australian state and territory governments have similar transport-related goals. These include to become more environmentally sustainable and reduce traffic congestion, which saps productivity. They typically aim to achieve these goals by increasing public transport use at the expense of cars.

Globally, affluent cities with high levels of public transport use have comprehensive public transport networks. These systems allow people to travel from one place to another anywhere in the city quickly, cheaply and conveniently with minimal interchanges.

In contrast, Australian cities are car-oriented. Their radial “hub and spoke” public transport systems primarily allow people to get to central business districts and occasionally major regional centres quickly, cheaply and conveniently. They struggle to do so for suburb-to-suburb trips.

In Australian cities, 75-90% of jobs and commerce are located in their suburbs. This means the structure of public transport is a major challenge for increasing patronage at the expense of cars. But what if existing arterial roads can be converted for use by rapid bus transit?

My research looked at the alternative of bus rapid transit along a corridor in metropolitan Adelaide where a new light rail track is proposed. From the CBD, this corridor runs about 7km east to the hills and 9km west to the sea. As an indication of the likely cost, a 1km extension along North Terrace of an existing line cost more than $A120 million in 2018.

The area within 3km of the corridor contains around 40% of metropolitan Adelaide’s jobs, major recreation and shopping facilities, most of its universities, and the airport. Buses running in often highly congested and slow traffic provide the only public transport in the area. As a result, public transport use is very low compared to similar areas in other Australian cities.

Read more: How to avoid cars clogging our cities during coronavirus recovery

Bus rapid transit services run along designated lanes down the centre of arterial roads, as would an arterial-based light rail. 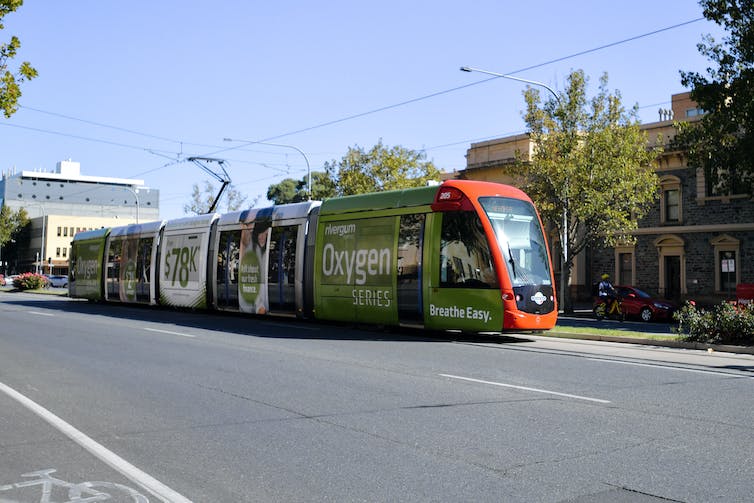 Stops are spaced at similar intervals to light rail and resemble stations rather than a typical bus stop. Such systems are in place around the globe, one of the most famous being in Curitiba, Brazil.

The advantages of buses add up

The great advantage a bus-based system has over light rail is cost. They can run along existing roads and don’t need expensive tracks and overhead wires.

Buses do have some disadvantages compared to light rail. For a start, when diesel buses are used, they cause significant noise and air pollution. Using electric buses can overcome these problems. 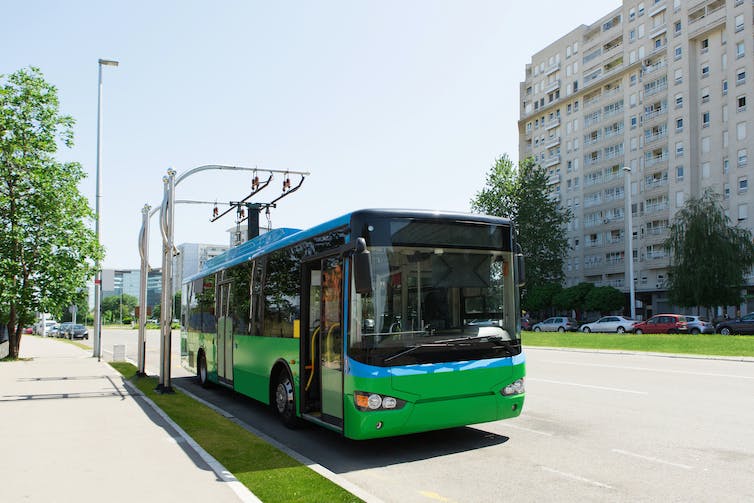 In addition, individual vehicles normally carry fewer passengers than light rail. However, my research shows low passenger capacity per vehicle is an advantage in low-density suburban areas, such as those along the proposed corridor in Adelaide. That’s because it means the buses have to run more often, making the service more regular, convenient and reliable.

Another advantage over light rail is that in low-density areas, vehicles can leave designated lanes and venture for 2-4km into suburbs to pick up and drop off passengers. This vastly expands the number of households in the system’s catchment and means passengers can get to their destinations with no interchange or just one.

Finally, the inner and middle suburbs of Adelaide, where most residents live and work, have many wide straight roads suitable for bus rapid transit services. It would be possible to develop around 100km of BRT lanes connecting existing light rail, heavy rail and busway infrastructure. I estimate a comprehensive network could be built for well under a billion dollars in a few years.

A similarly sized light rail network would cost tens of billions of dollars and take decades to complete, if it was to happen at all.

Therefore, if cities want people to switch from cars to public transport, bus rapid transit is the superior option in metropolitan Adelaide and potentially other cities with arterial road networks and low suburban densities.