She-Oak and sunlight is a visually stunning exhibition that brings together some of Australia’s most famous and much-loved paintings and presents them within a radically different context.

Dr Anne Gray, the curator of this exhibition, dismisses the traditional title for these painters, “The Heidelberg School”, as a misnomer — they worked in Eaglemont, not Heidelberg, and it was never a school.

She also argues in her exhibition the idea this was a purely “blokey” orientation in art, with Tom Roberts, Arthur Streeton, Charles Conder and Frederick McCubbin as the only serious members, needs to be revised.

They shared the limelight with a number of talented women artists including Jane Sutherland, Clara Southern, Iso Rae, May Vale, Jane Price and Ina Gregory, all of whom are present in considerable numbers in this exhibition. 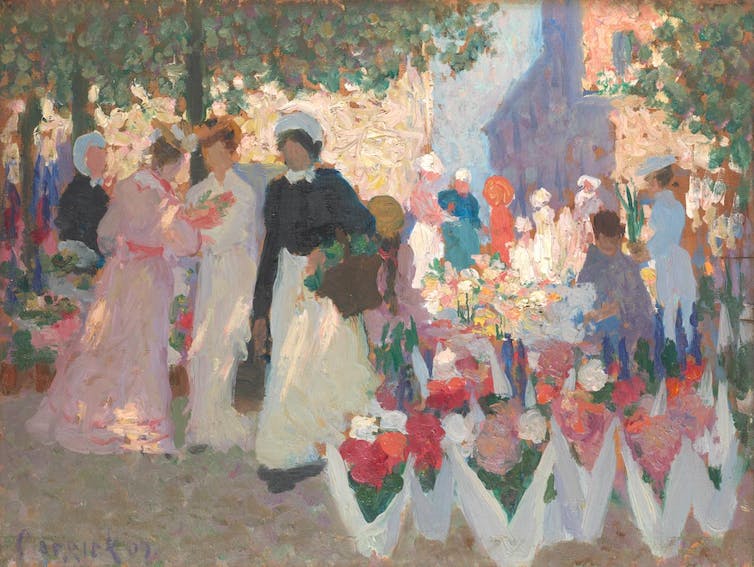 The title of the show, She-oak and sunlight, is derived from the title of a small painting by Tom Roberts, recently acquired by the NGV, exhibited in one of Australia’s most famous/notorious exhibitions of all time, the 9 by 5 Impression Exhibition that opened August 17, 1889 at Buxton’s Art Gallery, Swanston Street, Melbourne. 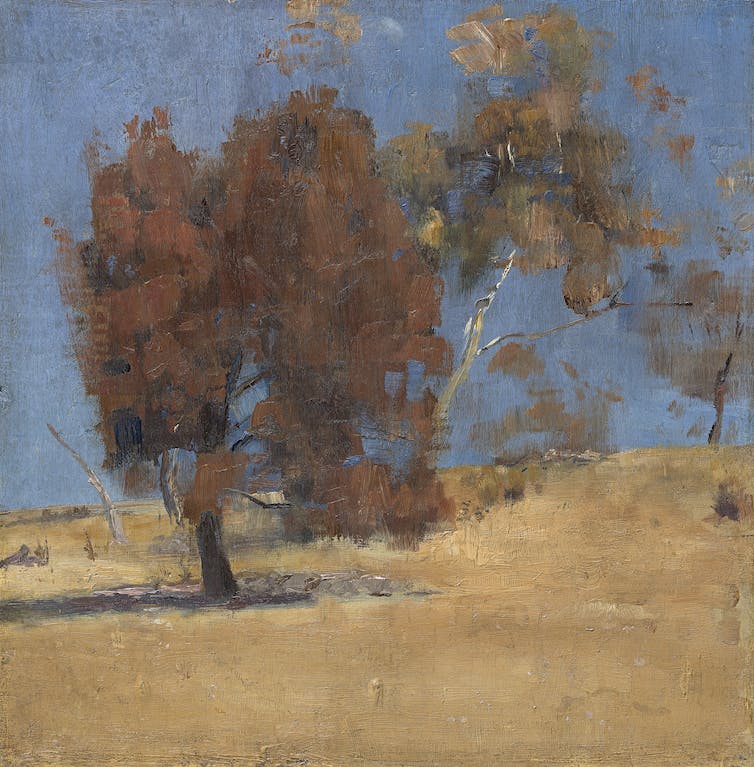 Roberts’s She-oak and sunlight appeared as no. 19 in the catalogue and perfectly epitomises the mood of the exhibition. The she-oak, or Casuarina, is native to Australia. The show celebrates the “Australianness” of the vegetation and topography, and stresses the quality of the intense, bleaching light in this country.

This is the best feelgood show I have seen since COVID, glowing and basking in nationalism and optimism.

The French and the Australians

The extent to which these painters could be described as “impressionists” depends a little bit on definitions.

Like the French Impressionists, these Australian painters worked outside en plein air, they made rapid, sketchy paintings that favoured landscapes and everyday subjects, they employed compositional structures influenced by photography and they were aware — even if in some cases indirectly — of the work of the French artists. 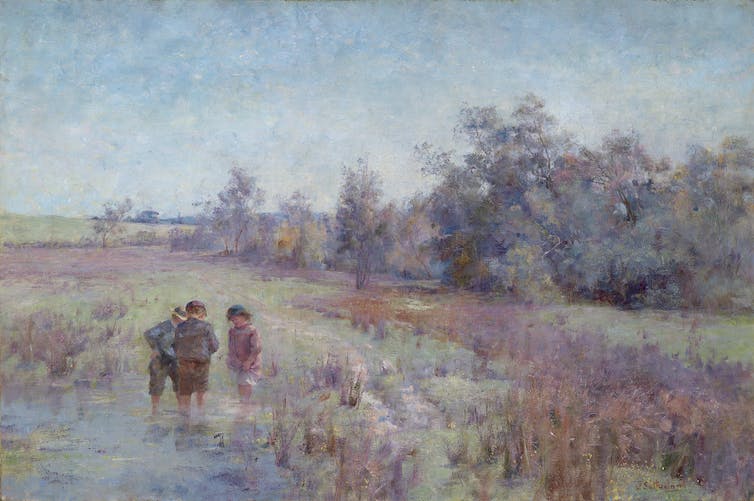 In the 9 by 5 catalogue (the name derived from the fact many of the paintings in the show were painted on nine by five inch cedar cigar box lids), the artists stated:

An effect is only momentary; so an impressionist tries to find his place. Two half hours are never alike […] So in these works, it has been the object of the artist to render faithfully, and thus obtain first records of effects widely differing, and often of very fleeting character.

The French Impressionists’ use of “colour theory”, with paint applied in small adjacent dabs of colour and the whole colour palette moved to the ultraviolet end of the spectrum, was in little evidence in the 1889 Melbourne exhibition. Most of the Australian paintings had colour applied traditionally in tonal gradations.

Some Australian artists who lived primarily in France, especially John Peter Russell, were much closer to the French Impressionists in mood, spirit and technique, but these were essentially expats.

Prior to this show, the benchmark exhibition of Australian impressionists was Jane Clark’s Golden Summers: Heidelberg and beyond held at the NGV in 1985 that broke all records for attendances. A less successful exhibition covering similar ground was held at the same gallery in 2007.

Gray’s exhibition, with over 250 artworks, is outstanding for its scope, scale and visual intelligence in the way it has been presented. Not only have all of the key works been assembled from around Australia, which is no mean feat — for example, to prise out of the Art Gallery of Western Australia, McCubbin’s Down on his luck, 1889, a destination painting — but new visual connections are created throughout the show. 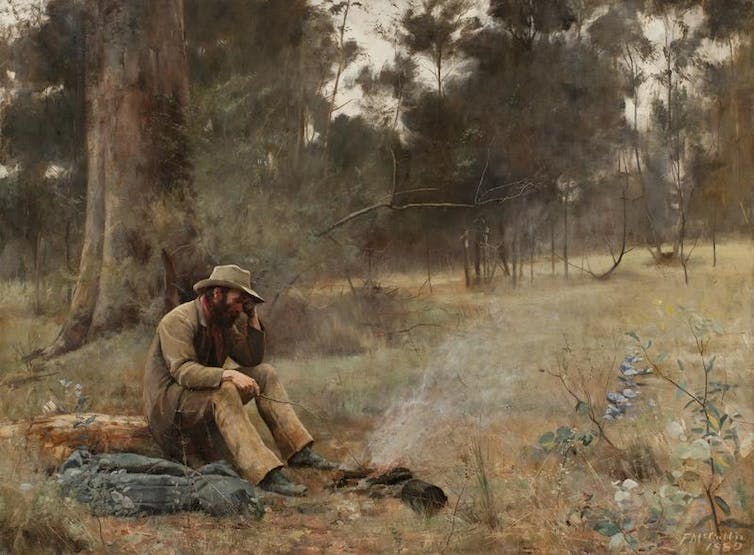 Édouard Manet, Claude Monet and James Abbott McNeill Whistler all feature in this exhibition to demonstrate the international artistic milieu in which these artists operated.

The 9 by 5 exhibition has been recreated with 55 of the original works reassembled in a separate room with Handel’s music filling the chamber, as was celebrated in the original display.

A startling surprise is seeing one of Australia’s most famous paintings, Arthur Streeton’s The purple noon’s transparent might c.1896, as one has never seen it before. It has been cleaned of its dirty varnish during the COVID lockdown and now radiates with light and warmth – the glowing mystique of the Hawkesbury River near Richmond. 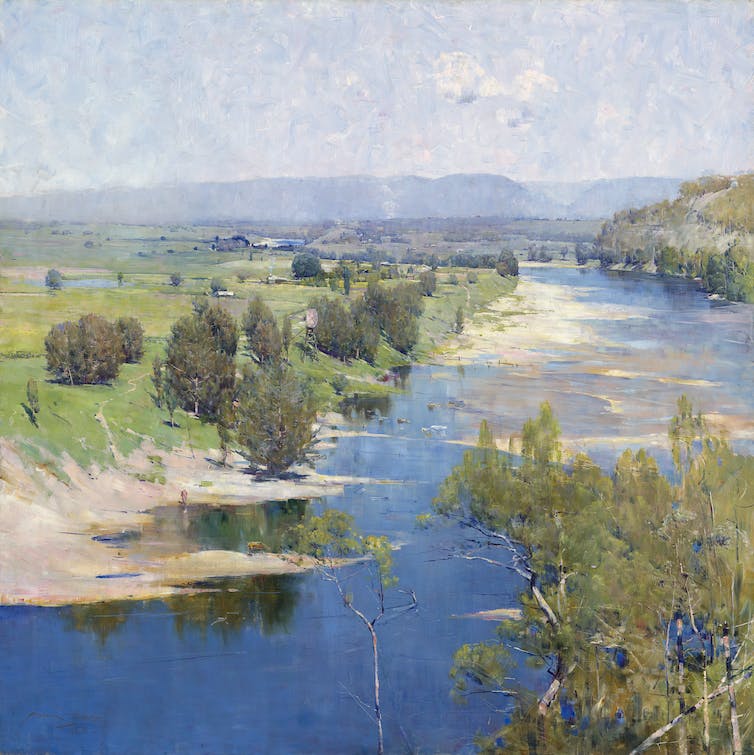 Many of the icons of Australian art, including Roberts’s Shearing the rams, Streeton’s Fire’s on, Roberts’s Break away and McCubbin’s The pioneer, share the space with William Barak’s images of the Rainbow serpent and sacred ceremonies.

I suspect this will become the definitive exhibition of our evergreen favourite national artists who created quintessential images of Australia that have ever since haunted our collective imagination.

She-Oak and sunlight: Australian Impressionism, is at NGV Australia until August 22.