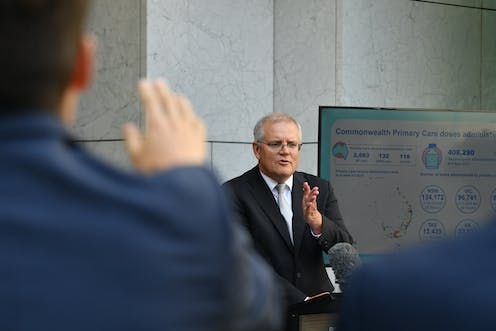 Last week, people were falling over themselves to get vaccination appointments and had to be told, by their doctors and their government, to be patient.

Patience is still needed — indeed, more than ever — but now there’s rising vaccination hesitation and the message from the government is people should remain eager...

Last week, people were falling over themselves to get vaccination appointments and had to be told, by their doctors and their government, to be patient.

Patience is still needed — indeed, more than ever — but now there’s rising vaccination hesitation and the message from the government is people should remain eager for the jab.

Conservative advice from the Australian Technical Advisory Group on Immunisation (ATAGI), recommending against the AstraZeneca vaccine for the under 50s (because of the very small danger of blood clots), has alarmed many people.

The danger is the advice has a knock-on effect, spooking people to whom it doesn’t apply.

Apart from younger frontline workers in health and aged care, those with underlying health conditions, and certain others, under 50s are not presently being vaccinated.

But with changing messages, some of the over 70s — the cohort now at the head of the vaccination queue — might start to have second thoughts, despite being told they shouldn’t.

They may or may not be reassured by Prime Minister Scott Morrison on Friday declaring his mother is lining up for her AstraZeneca shot soon. Or Commonwealth Chief Medical Officer Paul Kelly sharing the fact he’s urging his 86-year-old father to do so.

Thursday’s unwelcome medical advice was just the latest setback to the rollout and the Morrison government.

There have been the blocks and delays imposed on supplies from Europe and CSL production (of AstraZeneca) has been slower than anticipated.

The logistics haven’t all gone smoothly. Despite protestations to the contrary, the Commonwealth’s distribution has been sub-optimal.

Some doctors have complained of getting inadequate supplies; the arrangements for nursing homes have had glitches.

The whole program is running massively behind the original schedule. The government on Friday was celebrating passing one million doses administered, when we should have been well past four million.

We’re marching at a much slower pace than the United States or the United Kingdom. In the UK, incidentally, the authorities are being less conservative about AstraZeneca — it’s the under 30s who are being offered an alternative.

One can only imagine Morrison’s reaction when he was delivered the ATAGI advice, which of course he had to follow (even though some experts disagree with it). As he said, “You don’t get to choose the medical advice that’s provided by the medical experts”.

One guide to the prime ministerial mood is the fact he stresses it’s only advice to avoid AstraZeneca if you are under 50. The decision is up to you, and your doctor (though you will be signing a rigorous consent form if you ignore it).

But that line just contributes to the muddled messaging many people will feel they’re receiving.

With an already disorderly program thrown into further disarray by the medical advice, the government on Thursday night and Friday went into overdrive.

Another 20 million doses of the Pfizer vaccine — now the one for the under 50s — were instantly procured (this is on top of the 20 million already purchased). This is good news, if you are patient. They are not due to land until the last quarter of the year.

Health Minister Greg Hunt says Pfizer doses scheduled to arrive in coming days will ramp up, but details are sketchy.

The government is anxious to say the immediate stage of the vaccination schedule should not be much delayed.

The elderly who are being vaccinated now are good to get AstraZeneca.

As for the health and aged care workers? Determinedly looking on the bright side, Morrison noted many are over 50. Pfizer vaccines will have to be arranged for the younger ones, however, which could involve some scrambling.

But the rollout generally has to be recalibrated and delays are expected to hit in coming months when the program gets to the younger section of the general population.

For these people, vaccination is not as critical in health terms as it is for those older. But for the economy, vaccinating them as soon as can be done is vital.

At one level, Australia is being protected by our previous (and continued) success on the health front, which has left us with little or no community transmission. The rollout problems would be a disaster if we had COVID raging.

But we are riding on our luck. There are no guarantees against serious outbreaks.

Even without those, the longer the rollout drags on, the more we have the disruption of small lockdowns, and the slower the re-opening of Australia’s international border, with all the consequences that brings.

Morrison, who recently talked so confidently about everyone who was eligible and willing receiving one vaccine shot by October, now won’t commit to any date.

It would be a nightmare for him if the rollout wasn’t finished by year’s end, and the international border remained substantially shut.

He’d be only months from an election campaign, and Australians would probably be suffering a bad dose of cabin fever.

Politically, state and territory leaders have reaped rewards in elections from being seen to handle COVID well. A few months ago the pundits predicted Morrison would do the same.

But if they come to believe he has comprehensively mishandled the vaccine rollout, the voters could wreak vengeance.