The flightless kiwi is an iconic bird for New Zealanders, but all five species are threatened by habitat loss and introduced predators.

Recent genomic analysis focused on one species, the South Island brown kiwi or tokoeka, suggests several as yet undescribed lineages. Before these can be fully described and treated as genetically distinct, it is necessary to determine where the first tokoeka specimen was collected.

Any plant or animal specimen used for the first scientific description is called a holotype. Until now, it was a mystery where the kiwi holotype was collected, but our research, using digitised ship logs and modern forensic techniques, shows there is little doubt the first bird seen by European scientists came from Rakiura/Stewart Island.

This discovery could have repercussions for kiwi conservation.

There are four distinct populations of the South Island brown kiwi today: one in the mountains behind Haast, two in Fiordland and one on Rakiura/Stewart Island. In the past, separate tokoeka populations were found in other parts of the country, but have become extinct since human arrival.

Māori treasure the kiwi and its feathers are valued in weaving kahukiwi (kiwi feather cloak) for people of high rank. But the bird’s first description by European scientists is relatively recent, based on a specimen that made its way to London in 1812.

Following the strict conventions of taxonomy, this first kiwi was named Apteryx australis — belonging to a group of birds “with no wing” (Apteryx) and representing a southern (australis) branch.

What we knew about the original kiwi 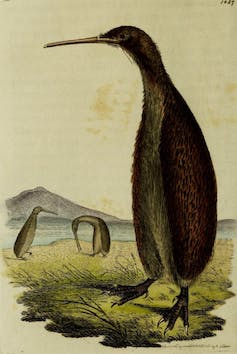 The original illustration of the kiwi, taken from the skin of the specimen, suggests the artist didn’t know the bird’s posture. Biodiversity Heritage Library, CC BY-SA

In 1813, George Shaw, the zoology keeper at the British Museum, published a description of the kiwi in his series of encyclopaedias called Vivarium naturae, or the Naturalist’s Miscellany.

Drawings by Richard and Elizabeth Nodder were made from the original specimen skin and suggest a penguin was used as a model.

Shaw mentioned he received the kiwi skin from his friend, Mr W. Evans (possibly a William Evans, a draughtsman and engraver of natural history plates active 1797–1856) who had passed it on from “captain Barclay”.

We know this was captain Andrew Barclay, of the convict transport ship and privateer Providence. He had obtained the specimen during the austral winter of 1811 on a visit to Port Jackson. 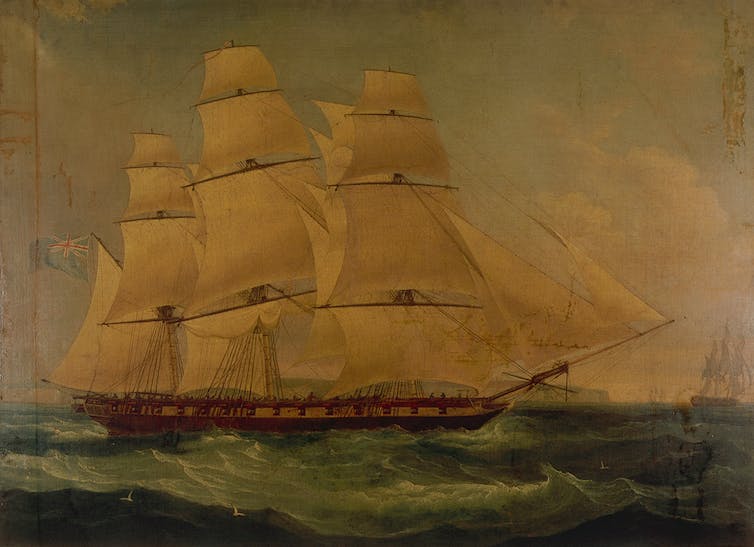 New Zealand’s European history is considerable shorter than Australia’s. Even in the early 19th century, Europeans had not visited large parts of Te Wai Pounamu (South Island) and the southernmost island Rakiura was virtually unknown.

It was even uncertain to many cartographers whether Rakiura was actually an island or part of the South Island, as captain James Cook had believed.

Sealing brought Europeans to southern parts of New Zealand from the 1790s. Most of the early sealing voyages were made out of Port Jackson (Sydney). Between 1792 and 1803, most sealing activity was confined to Fiordland, but seal numbers were so low by 1810 that sealing gangs turned their attention to subantarctic islands and Rakiura.

Records show the Providence moored at Port Jackson throughout the winter of 1811, before departing for China and England on October 20 1811. The ship carried a cargo of seal pelts bound for the Chinese market, and we now know the kiwi specimen was probably sold to Barclay by a sealer who had recently returned from southern New Zealand.

After Shaw’s death in 1813, his collections were sold at auction. Much of his collection, including this skin, made its way to Edward Smith-Stanley, styled Lord Stanley. It was bequeathed along with his entire collection to the City of Liverpool in 1851 and is now deposited in the World Museum Liverpool.

In 2019, we visited the museum and were given permission to take a tiny sample of skin for DNA analysis to determine once and for all where European science’s first kiwi was collected. 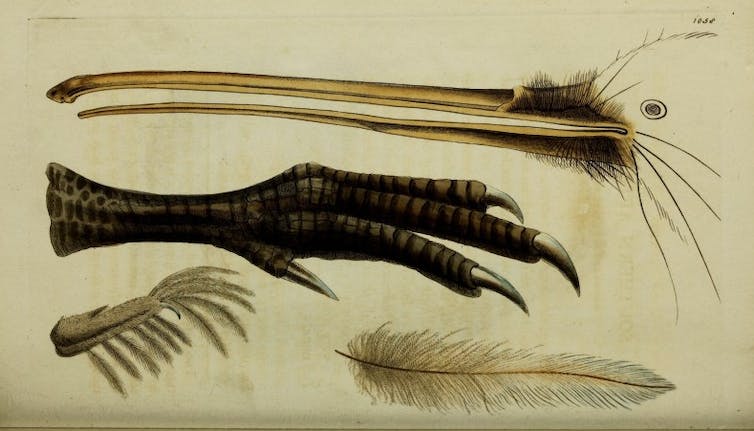 We used DNA amplification techniques developed for modern police forensics and sequenced both the complete mitochondrial genome and part of the nucleic genome. We then compared our results with data from a study published in 2016.

There is little doubt this kiwi came from Rakiura, and we may be able to pinpoint who collected it. Official records for New South Wales indicate two ships arrived in Port Jackson from the sealing grounds of Foveaux Strait in 1811: the Boyd and the Sydney Cove. Either could be the source of the holotype, but the Sydney Cove was sealing close to the South Cape on Rakiura, which seems the most likely type of location.

In order to get money and public attention for endangered species, it is necessary to show that when two populations exist and one is under threat, the threatened one is truly unique. Distinct populations are generally given scientific names.

This also has implications for the naming of other southern brown kiwi populations. We are working in consultation with Ngāi Tahu, the Māori guardians of this area, to develop a scientific framework to describe the genetic diversity of the South Island brown kiwi they call tokoeka.