The recent announcement that scientists have made human-monkey embryos and cultured them in the lab for two weeks made international headlines.

The technology to make animals that contain cells from other species has been available for decades and used extensively in research. These organisms are called “chimeras”.

But this latest advance highlights the need to broaden the discussion around the possible benefits of such research and, specifically, how inter-species chimeric research should be conducted in future.

Human-animal chimeras blur the line about what it means to be human, and this raises serious ethical questions about how we should use them.

How to make a human-animal chimera?

Human-monkey chimeras were first made in 2019. Inter-species chimeras are made by mixing cells belonging to one species with those of another.

This usually involves conducting microsurgery to introduce “pluripotent” stem cells — which can develop into several different types of cells — into a host embryo from another species.

In the recent study, human stem cells were placed inside monkey embryos created by fertilisation. The human-monkey embryos comprised mostly of monkey cells and some human cells.

These embryos were then kept in a laboratory, where researchers monitored the interactions between the human and monkey cells for up to 14 days, although most embryos didn’t survive.

Why do this research?

Some will find the idea of mixing human cells with any animal embryo (let alone a primate embryo) highly questionable. For the researchers who led the study, the rationale was clear.

They were interested in addressing the shortage of life-saving organs for human transplantation. If done successfully, a chimera could grow an organ suitable for direct transplant into a human.

Researchers have previously created human-pig chimeras, where pig embryos containing human cells were allowed to grow into a foetus.

However, the contribution of human cells was low and the goal to create transplantable organs remained elusive. The question of how to solve this challenge is what led to the recent experiment.

In this recent study, researchers weren’t attempting to create human-monkey chimeras with a view to harvest organs. Rather, they created an in-vitro model (outside a living organism) to explore what happens to the transferred human cells.

They wanted to identify ways to enhance the survival of the human cells and ultimately improve human chimerism in pigs and other evolutionarily-distant species, with a view to developing transplantable “human” organs from animal donors.

What are the issues raised?

This project might conjure images of mad scientists (think Victor Frankenstein) meddling with nature, irresponsible and without oversight. But unlike Frankenstein’s experiments, this study was not done in secret.

In the paper, the researchers describe in detail the steps they took to comply with international guidelines. This included extensive ethics reviews undertaken within the institutions involved and consultation with external bioethicists.

Of note, the study involved the use of eggs harvested from female monkeys. While the animals weren’t killed, any use of non-human primates should be approached conservatively and be consistent with international standards.

The thorniest ones are linked not to the creation of in-vitro chimeric embryos, but rather the eventual creation of live-born chimeras, such as a human-pig chimera, if future research can overcome current limitations.

Read more: Fully-grown pig chimeras are only a few years away – we need to understand where they stand now

Humans are widely (but not universally) thought to have a higher moral status than other animals. But human-animal chimeras blur this line. They are not fully human, nor fully non-human.

So the big question is whether (or under what conditions) we should be allowed to use them as a source of transplantable organs, in harmful research, or for other purposes we wouldn’t use humans for. 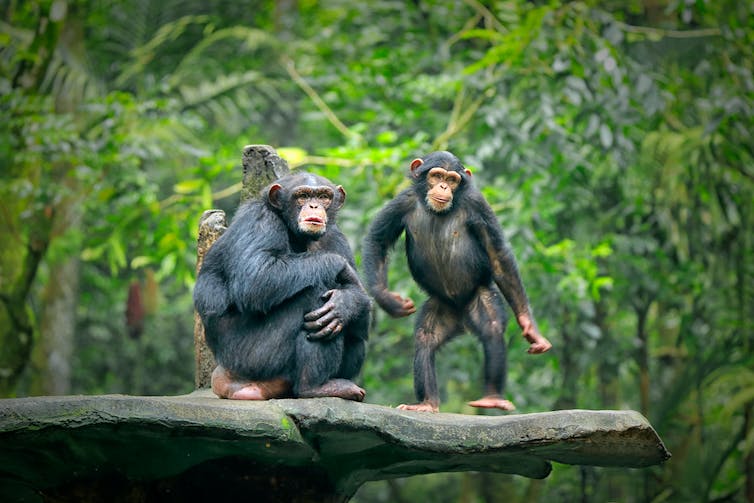 Of all non-human animal species, chimpanzees are genetically the closest to humans. Shutterstock

These concerns will be most acute for chimeras with human-like brains, wherein human cells are incorporated into an animal’s brain during development.

Humans pride themselves on their autonomy, rationality and sophisticated self-awareness. If a human-pig chimera developed this capacity, it may have a moral claim to be treated more like a human than a pig.

The study raises a second ethical concern that is more immediately relevant. Using recent advances in monkey-embryo culture, the researchers cultured some embryos until 19 days post-fertilisation.

Many jurisdictions explicitly limit human embryo research to the first 14 days of development, when what will become the central nervous system begins to develop.

Should the 14-day limit also apply to human-animal chimeric embryos?

Perhaps it should depend on the proportion of human cells in developing chimeric embryo. Although, this leaves us with the question of how many human cells is too many.

Or perhaps, as some have argued, the 14-day rule ought to be revised.

How should we manage these concerns?

Like many other aspects of stem cell research, we can find a starting point in guidelines from the International Society for Stem Cell Research.

These standards, soon to be updated, explicitly recommend specialised review for human-animal chimera research. This includes monitoring chimeric animals for unexpected behaviours that indicate suffering, which could then be addressed under existing animal ethics principles.

Experts say it might be worth monitoring chimeric animals for evidence they may be autonomous, rational, or self-aware — and modifying their treatment accordingly.

Given the ethical complexity and sensitivity of human-animal chimera research, it’s crucial it receives careful oversight. As the field develops we must continuously review where the boundaries of the research lie.

And these conversations must not only explore animal welfare, but also how potential patients and the broader community view access to organs derived from donor animals.