Last week might have been the first time you ever heard of “internal waves” — the phenomenon suspected of causing the tragic sinking of the Indonesian submarine KRI Nanggala the previous week, resulting in the deaths of the 53 crew members.

So it may surprise you to learn that you’ve doubtless encountered internal waves before. They exist all around us in the atmosphere and ocean, although they are usually invisible. If you’ve ever been on an aeroplane experiencing turbulence, you’ve felt their effects. 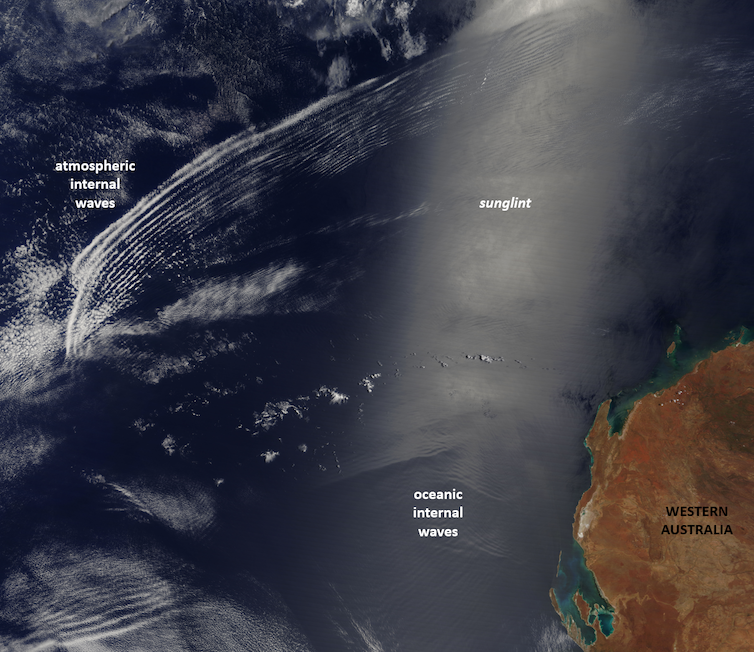 Satellite image of internal waves in the atmosphere and ocean off the northwest coast of Australia. In the atmosphere we see the waves as lines of clouds. In the ocean, the waves appear in reflections of the suns rays off the sea surface. NASA

Internal waves are generated when a strong wind passes over a steep hill. Air is lifted up and over the hill against the force of gravity, and then accelerates down the other side as gravity takes over. This up-and-down motion kicks off an oscillation downwind of the hill. The oscillating motion is an internal wave.

You can visualise this more easily by imagining a bouncy ball rolling off a step on an otherwise level floor. If you roll it fast enough, the ball takes flight at the crest of the step and accelerates downwards under gravity. When the ball hits the ground it starts to bounce with a bounce-length (or wavelength) that depends on how fast you rolled it. 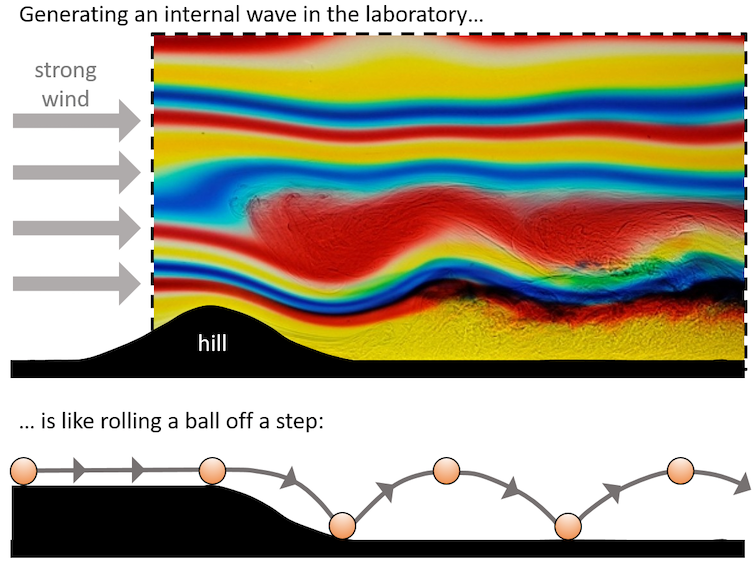 Internal waves are generated by fast flow over a steep hill, much like a ball bounces when rolled at speed off a step.

Unsurprisingly, atmospheric internal waves are most often found in mountainous regions. If you’ve ever looked up at the sky and seen long parallel bands of clouds, particularly near mountains, you’ve probably seen an internal wave propagating through the atmosphere. The waves propagate upwards at the same time as they are carried downwind of the mountain by the air flow.

The waves can reach all the way into the stratosphere, which begins roughly 10 kilometres above the ground, before changes in the atmospheric structure force the waves to break. Just as waves break on the beach as the water becomes shallower, internal waves break in the atmosphere when the properties of the air (such as flow speed or density) change rapidly with height. Such changes are common in the lower stratosphere (10-15km), which is where jet airliners fly.

And just like waves at the beach, this breaking creates a huge amount of chaotic motion - or turbulence - creating an unpleasant jolting motion for any aircraft (and their passengers) that happen to be in the vicinity!

So what about internal waves in the ocean? Just like in the atmosphere, they are generated by strong flows (in this case, ocean currents) over steep hills. But in this case the hills are on the seafloor.

The steeper the hills and the stronger the currents, the bigger the resulting waves. The seas around Indonesia have a perfect combination of these ingredients: a network of deep basins connected by narrow, shallow channels, through which strong tidal currents flow.

These currents are so strong they generate a particularly extreme kind of internal wave known as an “internal solitary wave”, which concentrates the entire wave energy into a single up-and-down motion, rather than many individual oscillations. These waves can be hundreds of metres high, several kilometres long, and travel at speeds of 10km per hour.

Solitary waves are biggest at depths of around 50-200 metres, where there is a sharp temperature gradient between the warm surface layer and the cool ocean interior — the same depths at which submarines typically operate. If a submarine sitting at this kind of depth were suddenly hit by one of these waves, it would be carried downwards (or upwards, depending on its position relative to the wave) at a rate of perhaps 10 metres per minute for 10 minutes.

Without swift action to counteract the wave motion, a submarine could quickly be carried below its maximum operational depth, leading to hull failure and sinking. An archive US Navy report reveals submarine commanders were aware of the risks of internal waves as long ago as 1966.

Read more: Indonesian submarine found: what might have happened to the KRI Nanggala in its final moments?

Besides the danger they pose to submarines, internal waves also play an important role in ocean circulation. They carry vast quantities of energy, helping to sustain ocean currents, mixing heat and carbon dioxide through the oceans, and thus influencing our global climate.

So next time you’re jolted by turbulence on a plane, or looking up at some strange stripes of cloud in the sky, give some thought to the internal waves propagating all around you.