Few structures in nature inspire more fear and fascination than the fangs of venomous snakes.

These needle-like teeth are used by snakes to pierce their prey and inject deadly venom. With more than 3000 species of snake inhabiting our world, we wondered: are all their fangs the same? Or are their fangs differently shaped depending on what they eat, as we find in other animal groups?

To uncover the answer, we examined the three-dimensional shape of snake fangs in 81 species and found that fangs have indeed evolved to suit the snake’s preferred prey, from hard-shelled crabs to furry mammals. Our results are published in the journal Evolution.

Venomous snakes are found all over the world and belong to five big families: vipers, atractaspidids, elapids, colubrids and homalopsids. Throughout evolution, each of these families independently “designed” their fangs and venom delivery systems, which led to slight differences.

Overview of the skulls across the five venomous snake families. Note the difference in the position of the fang inside the mouth, the size difference and the size of the (maxillary) bone the fang is attached to. Silke Cleuren

Vipers and atractaspidids have long tubular fangs that flip out when they strike, elapid snakes have short tubular fangs that are fixed to the jaw, and colubrids and homalopsids have grooved fangs all the way at the back of their mouths.

Teeth are adapted to diet across the animal kingdom

Variations in tooth shape according to diet are common in the mammal kingdom. Carnivores often have bladed cheek teeth to tear flesh, and herbivores have ridged molars to grind down leaves, roots, and other plant matter.

Venomous snakes vary in the types of prey they target. Some specialise in small mammals such as mice, some go for fish, shrimps or crabs, and some hunt reptiles and even other snakes. There are also generalists, which almost anything they can fit in their mouths. 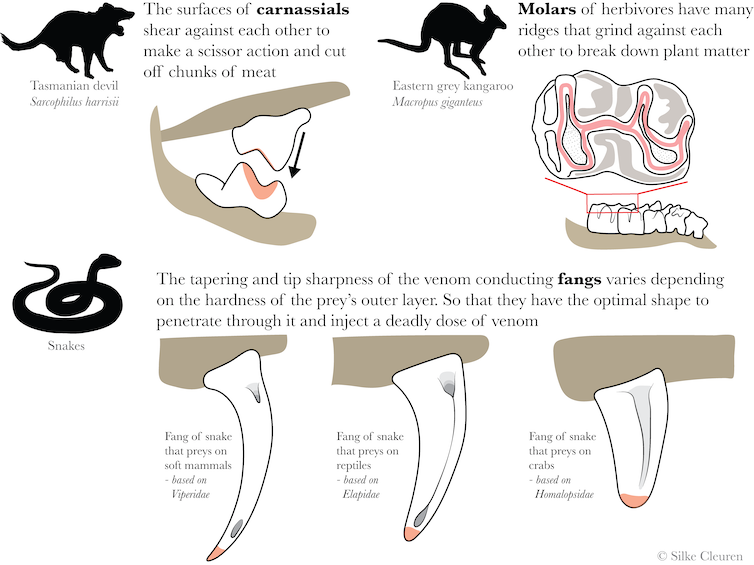 Variation of tooth shapes across the animal kingdom. This illustration shows that depending on the food you eat different optimal tooth shapes have evolved that are good at coping with the preferred food source of the animal. Silke Cleuren

We examined the three-dimensional shape of fangs from 81 snake species belonging to four families, with the exception of the rare atractaspidids. By measuring differences in the strength and sharpness of the fangs, we were able to show how fang shape is closely tied to prey preference. 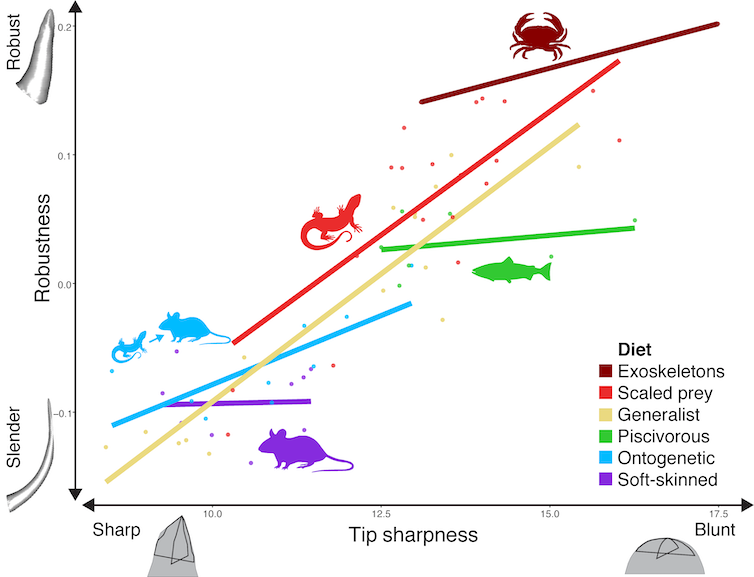 Variation in fang tip sharpness (x-axis) and robustness (y-axis) for each of the different diet categories found in snakes. The fang shapes found in snakes with a specific diet are represented by the coloured lines. Silke Cleuren

Fangs are more robust and blunt in species that target tougher prey, such as lizards and crabs, and more slender and sharp-tipped in species that target prey with softer skins, such as mice. Additionally, we found fang shape demonstrated “evolutionary convergence”: the fangs of distantly related species with the same diet are more similar than those of closely related species with different diets.

Predicting the diet of rare and fossil snakes

Knowing more about the foods each type of snake likes can be valuable for the future success of both snakes and their prey. In Australia, most threatened snake species are affected by loss of habitat, which likely also results in the inability to catch their preferred prey.

By investigating their fangs we can now predict the group of prey it most likely prefers. If we were to relocate snakes, we could use this information to choose a suitable habitat that contains its favourite meal.

Read more: Like a jackal in wolf’s clothing: the Tasmanian tiger was no wolfish predator — it hunted small prey

This knowledge can also be used in the other direction, for the conservation of threatened prey species, by protecting them against snakes that are a threat to them. 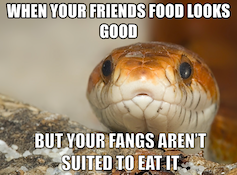 Silke Cleuren Investigating the fangs from fossils of ancient snakes can shed light on which prey they likely targeted and how their habitat might have looked. Knowing the fang shapes of fossil snakes can help explain the wide variation in fangs we see today and how this variation ensured the continued success of some of nature’s most specialised predators. Can we use this to improve protective clothing? Given the threat snakes can pose to humans, understanding how fang shape varies can also help us to design better protective clothing. By testing how easily different fangs penetrate fabrics and other materials, we can make better choices of materials that actually protect against snake bites. This could result in the improvement of clothing like hiking pants or shoes that will keep us safe if we accidentally get too close to a grumpy snake while trekking through their habitat.