For any serious artist, funding the production of ambitious works — let alone finding the resources to keep yourself alive during the process — can be daunting.

However, if studio expenses, rent, and the cost of living are taken care of, an artist is free to fulfil their aesthetic aspirations. The old model of patronage exemplified by the great Italian families of the Renaissance, such as the Medicis, was on Western Australian artist Simon Gilby’s mind when he contacted businessmen and art collectors Ron Wise and Lloyd Horn 15 years ago. He was seeking financial support for two years to create a body of new work. 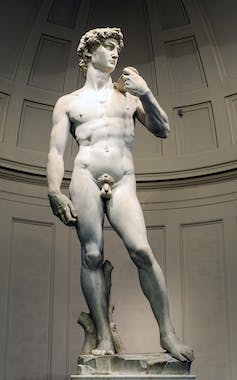 Wise and Horn stepped up. They invited five other collectors – all successful businessmen and women – to join them in providing Gilby with the funds to make what he describes as life-sized, figurative sculptures.

These seven members of the group – dubbed The Syndicate by Gilby – each contributed $14,000. They made regular studio visits to see him at work. It was a learning experience for all.

Gilby produced ten free standing figures fabricated from welded steel. They included men and women frozen in time, some punctured by skeletal fish, others with their heads in cages and the mythical figure Daphne transforming into a laurel tree. It was a remarkable tour-de-force.

At the end, The Syndicate members met and drew lots. The first person chose an available work they would like to own; then the next, and so on. An exhibition followed.

Read more: Where to next for arts philanthropy in Australia?

That first commission was intended to be a one-off, but its success led the group to continue. Since then, it has assisted four WA artists, Peter Dailey, Stuart Elliot and Paul Kaptein.

Each artist has been given the opportunity to create works with the confidence of a guaranteed pre-sale. However, as Horn explains,

I’ve always stressed upon The Syndicate members that the idea of the project is to support the artist and that they should look upon the work they receive at the end of the commission as a bonus.

The Syndicate commits to support an artist for two years to complete a project framed around figurative sculptures.

WA has an established history of figurative sculpture, which can be traced back to Pietro Porcelli. He peppered the state with statues of well known men — explorer and politician John Forrest, engineer C.Y. O'Connor, politician Sir James Lee Steere — at the turn of the last century. 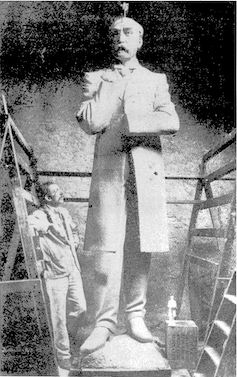 Porcelli working on a statue of Irish engineer C.Y. O'Connor, circa 1910. Wikimedia Commons

This figurative tradition was revived in the early 1960s by Hans Arkeveld. Focussing on life-size, figurative work also makes it easier to understand what you’re getting at the end of the project, says Horn. “Everyone knows what to expect.”

While the schedule has blown out on occasions, the collectors allowed each artist the time required to complete their project.

The artists are encouraged to seek additional support from local and national funding bodies, but The Syndicate ensures an exhibition and catalogue are included as part of the package. This level of philanthropic beneficence is remarkable. The opportunities it has provided to each of the four artists has enabled the creation of an outstanding body of works — body being the operative word.

Paul Kaptein is the latest sculptor to benefit from The Syndicate’s largesse, pushing his practice into entirely new territory. It has enabled him to tackle the practicalities of making multiple large works in cast concrete. 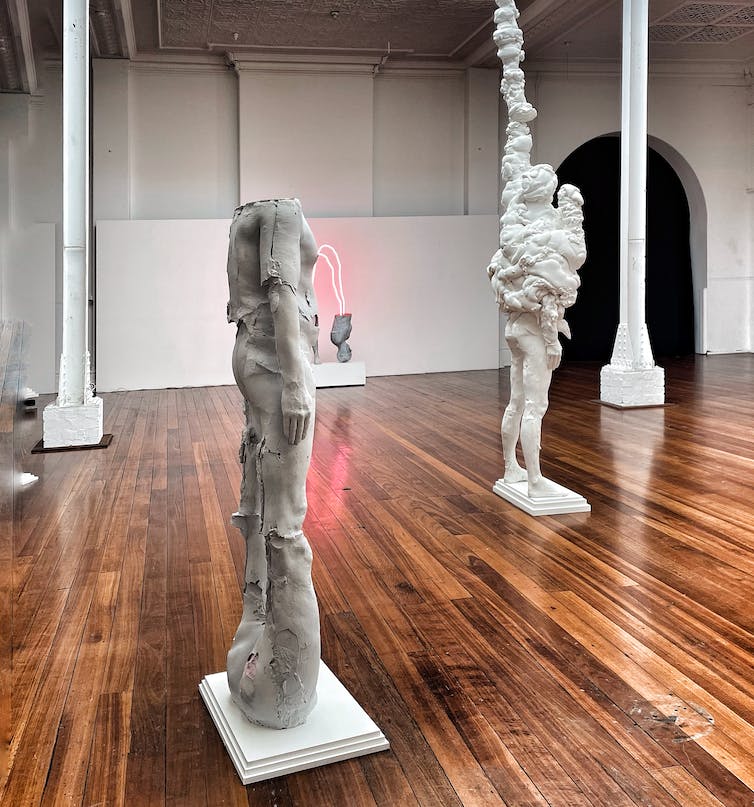 The work is unsettling and disruptive. Ted Snell

The final group of ten men who now stand stoically within the atrium space of Old Customs House in Fremantle are a testament to the commitment of both artist and benefactors.

These new cast works have a fragility that marks them out from their carved predecessors. Dismembered and reconfigured, they seem adrift in the world, glowing luminously within the light-drenched interior.

Read more: Robot sculpture, coming to a gallery near you

All These Mountains Will Melt at Dawn depicts a semi-naked torso rising from the ground with another man’s feet standing on his soles. His body is fit, his muscles toned and his arms resolutely at his side, though his skin seems flayed and in tatters.

Although dismembered, the body retains its dignity and strength. Who is this man, and how do we approach him? What support can we offer? What does he need from us?

These existential questions are palpable and unsettling. Thanks to The Syndicate, Kaptein’s work will stand as a record of our disruptive and distressing times.

Generously, the project continues with the announcement that Linde Ivimey will be the fifth artist supported by the group.

The first women to be invited, Ivimey’s figurative works, which use recycled materials, including bone and skin, are unlikely to be life-sized due to her methodology of combining techniques such as sewing, crochet and welding. But they will continue to unsettle and disturb.

Paul Kaptein’s exhibition All These Mountains Will Melt At Dawn at the Old Customs House Gallery in Fremantle runs till the end of May.