I was making small talk with a medical technician during a health check a few months ago. After hearing I was a senior lecturer teaching Chinese politics at the University of Sydney, she commented: “It must be very hard for you.” My first thought was that she meant it must have been hard to teach online during the pandemic lockdown....

I was making small talk with a medical technician during a health check a few months ago. After hearing I was a senior lecturer teaching Chinese politics at the University of Sydney, she commented: “It must be very hard for you.” My first thought was that she meant it must have been hard to teach online during the pandemic lockdown. But then she asked: “How do you manage to overcome your bias?”

I am an academic of Chinese background in Australia. So am I necessarily biased in my approach to Chinese politics? Is it indeed possible that my upbringing in China has made me a blind supporter of the Chinese system? Or has my embrace of liberal values turned me into a militant “China basher”?

These questions had occurred to me before, of course. But against the background of the recent souring of China-Australia relations, they have become more acute than ever before.

Read more: Why the Australia-China relationship is unravelling faster than we could have imagined

In November 2020, for the first time in ten years of teaching, a student who described themselves as a “Chinese patriot” accused me of being a “Taiwan independence supporter”. The reason was my comment in class that, after the election of Joe Biden as US president, issues such as Tibet, Xinjiang and Taiwan were likely to cause tensions between China and the United States. On the same day in the same class, a non-Chinese student protested that, while wishing to avoid turning academic analysis into a moral judgment, I should have remembered that “authoritarianism is evil”.

Teaching the topic of Chinese politics is becoming more challenging in a world increasingly divided by ideas, beliefs and interests. Of course, our own values and experiences always influence and even drive inquiry and the extension of knowledge. But if students come to class with pre-existing rigid mindsets and refuse to engage with different opinions and viewpoints, then education simply fails in its purpose.

“We should support whatever the enemy opposes and oppose whatever the enemy supports,” Chinese leader Mao Zedong said in a 1939 interview. Taken out of context (Mao was describing the rivalry between the Chinese Communist Party and the Japanese puppet government in Nanjing) this sounds one-sided and superficial. But if we succumb to nationalistic emotions, moral values and political ideology, then this perspective is exactly how we see the world. 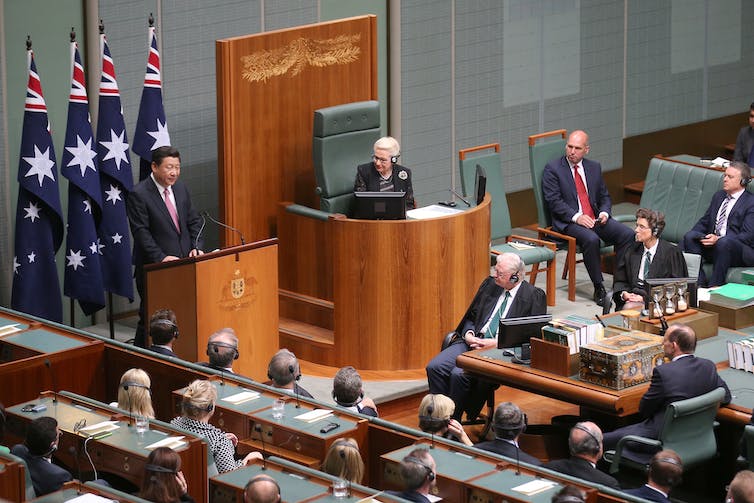 Read more: Students in China heed their government's warnings against studying in Australia

Understanding China – and ourselves

In the study of politics in China, I have endeavoured to teach students that things are often not as clear-cut and absolute as many expect. In other words, nuance is the key to understanding China.

It is valid to question the legitimacy and stability of any system, particularly if the system may rely on censorship and coercion. But over the years, all the predictions of the system’s collapse have proved wrong. China’s one-party rule has been firm and strong to this day.

We need to consider the question of what explains the resilience and prosperity of the Chinese system. Before we criticise it for its lack of liberal democratic values, it is important to first understand what the system is and how it operates – that includes its economic drivers, its sources of legitimacy, its historical legacy and its developmental trajectory.

Why is it important? Such understanding will help us better cope with a world where China is a significant power and will likely remain so in the foreseeable future.

We have seen the rise of a new generation of patriotic Chinese “wolf warriors” who aggressively defend the state’s positions. But it is equally important for them to engage with different opinions and perspectives.

Read more: Pro-China nationalists are using intimidation to silence critics. Can they be countered without stifling free speech?

For one thing, when defending China against Western countries’ frequent “attacks” on “sensitive issues”, they need to understand that such issues might reflect the inherent problems of China’s system. These problems include economic inequality, ethnic tensions, vulnerable property rights, lack of individual freedom, and many more. Moreover, they could benefit from a self-recognition of the origins of their own strong feelings of pride and loyalty to the Chinese nation as a result of how it constructs their identity and sense of belonging.

Research versus parroting the official line

Returning to the question of how I manage my bias when teaching Chinese politics, I guess my identity as a Chinese immigrant will always have an impact on my understanding of the Chinese system. For all of us, our perceptions of the world reflect the values and beliefs associated with our identities and experiences.

Just like my students, some readers of this article might think I am too critical of China. In the eyes of others I might appear not critical enough. This is understandable: my opinions have been informed by my own experiences, as well as by my analysis of primary sources, engagement with many academic thinkers and communications with researchers, policymakers and business owners.

I try to expose students to the complexity of Chinese politics through such a research-driven approach. This approach is largely missing in public debate about China in Australia. Yet it is a difficult but important task.

If we fail in this task, in the quest for knowledge and understanding based on careful evaluation of opinions and facts, our discussions would be reduced to nothing more than an indiscriminate acceptance and simple repetition of official discourses or media coverage, whatever their source. My students in the class reflect the views of their home societies. In the current environment, that’s making it more difficult than ever to engage in productive analysis and discussion.