The massive digital platform market has until recently been dominated by a handful of US-based companies such as Facebook and Google. However, as foreign governments and competing platforms try to erode this domination, platforms are becoming a new sphere of geopolitical manoeuvring.

The European Union wants to gain more control over international tech companies and achieve more independence in the digital arena. India has banned 177 Chinese apps on the grounds they are “prejudicial to the sovereignty and integrity of India”.

And in 2020, the then US President Donald Trump spent months attempting to ban the Chinese-made video-sharing platform TikTok or force its sale to an American owner. While some claimed Trump was piqued by a supposed prank against him by teenage TikTok users, a look at statements from US government officials over the course of the year shows geopolitical concerns were the main driver.

If governments are continue to be driven by “digital nationalism”, the US-based big tech companies are likely to continue to dominate.

TikTok is the first social media platform born outside the United States to become a significant rival to Silicon Valley incumbents such as Facebook and Instagram. The short-form video platform rose to prominence in 2019 and, by early 2020, was the most downloaded app globally.

Since its rise, TikTok has come under intense criticism from governments around the world, who question whether ByteDance, the company that owns TikTok, sufficiently protects users’ data against access by the Chinese state.

However, the way TikTok treats user data is not very different from what its US counterparts do. There is little to suggest the platform poses any singular national security threat.

Read more: TikTok is popular, but Chinese apps still have a lot to learn about global markets

The company releases transparency reports similar to those of Google and Facebook. A CIA assessment reportedly concluded there was no evidence the Chinese government had intercepted TikTok data.

TikTok’s Chinese origins can be used to oversimplify the platform’s actual territorial connection to China. ByteDance was founded in China but it is incorporated in the Cayman Islands and operates as a multinational with subsidiaries in Australia, the US, the UK and Singapore.

The backdrop to Trump’s stance towards TikTok was an intensifying contest between the US and China over the strategic value of the digital environment. Who gets to extract economic value from the platform economy? Who gets to exert ideological influence through vast sociotechnical systems? Who enjoys strategic advantages from control over and access to data and infrastructure?

As today’s global tech platforms have developed, they have largely mirrored the shape of classical geopolitics: the US has dominated. Recently, however, Chinese technology firms have flourished, expanding China’s economic and strategic capacities.

TikTok teens may have successfully pranked Trump, but his actions and rhetoric fit within a geopolitical agenda articulated by others within the administration.

On June 24, 2020, US national security advisor Robert O’Brien spoke publicly on the topic of the Chinese government’s “ideology and global ambitions”. He warned China posed a threat to US citizens and explicitly implicated TikTok.

Two weeks later, on July 6, US Secretary of State Mike Pompeo suggested TikTok should be treated like Huawei, the Chinese telecommunications company that is effectively banned in the US.

Several days later, Microsoft released a statement explaining that its representatives had spoken to Trump directly regarding the acquisition of TikTok. When questioned about his talks with Microsoft, Trump stated:

[…] it can’t be controlled, for security reasons, by China. Too big, too invasive, and it can’t be. 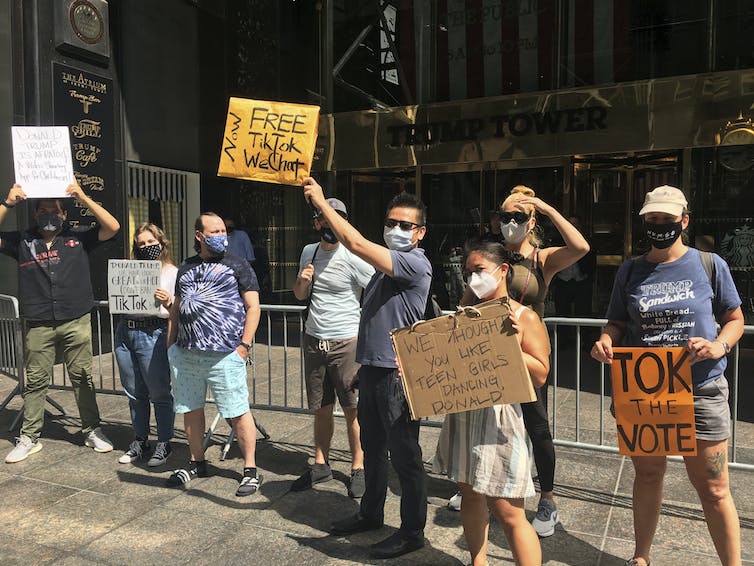 On August 5, 2020, the US Department of State announced an expansion of its Clean Network program, which has the stated objective of “guarding our citizens’ privacy and our companies’ most sensitive information from aggressive intrusions by malign actors, such as the Chinese Communist Party”.

Expansions to the program included five policies aimed at reducing the presence of China in the US. These policies limited the use of Chinese telecommunication carriers, applications sold in app stores and pre-installed on devices, cloud services and undersea cables.

The following day, Trump issued an executive order forcing the sale of TikTok to a US company on the grounds that TikTok posed a threat to “the national security, foreign policy, and economy of the United States”.

Ultimately Trump’s executive orders were blocked in the courts and the ban and forced sale never implemented.

The rise of digital nationalism

TikTok provides welcomed competition to the platform incumbents. If real competition in the sector were to increase, requiring the incumbent platforms to compete for users, we might see further innovations in the platform market and a less concentrated tech sector.

So far, however, the US government has explicitly focused on the geopolitical implications of the rise of a Chinese platform. Whether the Biden administration will continue this approach remains to be seen.

Read more: ‘Digital sovereignty’: can Russia cut off its Internet from the rest of the world?

Both the US and China have a long history of shielding strategically important industries. For those concerned with increasing competition and diluting the concentrated power of the dominant technology firms, the rise of digital nationalism is a new obstacle.

Moving forward, policymakers may need to overcome nationalistic impulses if they are to increase global competition in the international platform market. And both US and Chinese rule must be rejected if we are to decentralise power within the digital environment.