From its humble beginnings in 1956, when just seven nations participated, Eurovision has grown to epic proportions.

Known for its kitschy mix of Euro-pop, bizarre choreography and hammy performances, an estimated 182 million viewers tuned in to watch the competition in 2019. This year, 39 acts seek international glory.

Although the competition centres on the music, the costumes rival for attention. They are a kind of language, embodying the cultural values and the expressive agency of the artist. The Eurovision costume is a performer in its own right, and so here are ten of the best (or most head-scratching) costumes from Eurovision history. 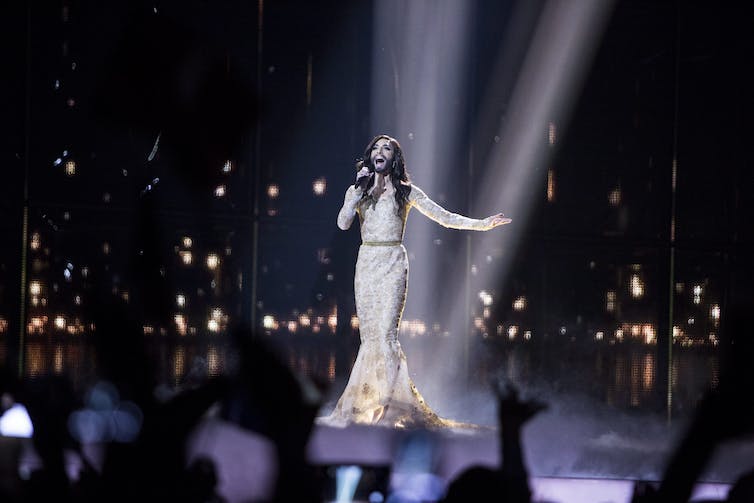 In choosing a dress which hugged to her curves, Wurst reached the high glamour of performers such as Celine Dion (who won Eurovision for Switzerland in 1988), while the juxtaposition of the beard announced her status as a genderqueer artist.

On the world stage, Wurst was seen to break ground for others to fearlessly follow in her footsteps. 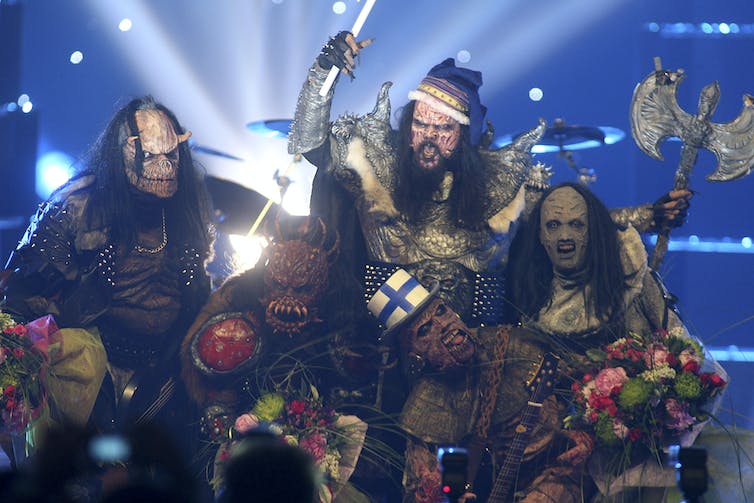 It may not be what you think of when you hear Finish dress — but metal music is huge there. AP Photo/Petros Giannakouris

The demonic costumes and corpse-like masks worn by Finland’s heavy metal band Lordi were wholly embraced by the crowds, resulting in them taking out the 2006 title.

The ghoulish prosthetics and Kiss-inspired costumes included fur, studs, chains, claws and horns, capturing the spirit of heavy metal — it also catered to Finland’s healthy appetite for the music genre which thrives in the country. 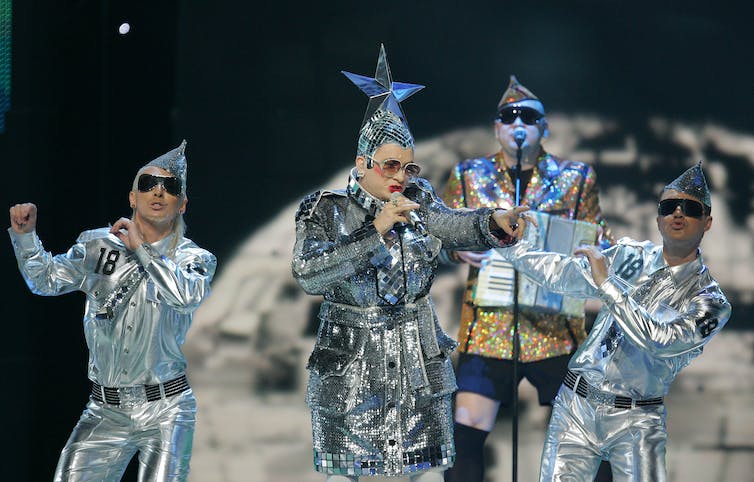 For even unsuccessful contestants there is the opportunity for costumes to leave a lasting legacy.

Like Conchita Wurst, Verka Serduchka is a drag persona: Andriy Mykhailovych Danylko’s flamboyant middle-aged woman, where a full-bosom was as much as the costume as a headpiece topped by a gigantic silver star.

Read more: A song to unite? The gender politics of Eurovision still divide

Moldovan singer, Aliona Moon, stood on a rising platform in a five metre long gown on which projections transformed the fabric from cosmic nebula to a flaming pyre.

The dress itself was fairly unremarkable, but the use of digital projection recast Moon’s costume from dress to canvas. The projections shifted with the song’s tempo, adding drama and suspense as it reached a crescendo.

The lead singer’s costume gave a clear nod to music icons of the 70s and 80s: think Suzi Quatro’s Can The Can, David Bowie as Ziggy Stardust or Alice Cooper’s School’s Out. The crotch-hugging silver spandex suit flared hard at the legs and scooped low on the chest, bearing the requisite rocker’s hairy chest.

Luckily for Wig Wam, all eyes stayed on the lead singer, since his fellow band member’s costumes were an incoherent, incomprehensible mix of rock fashion genres and decades. 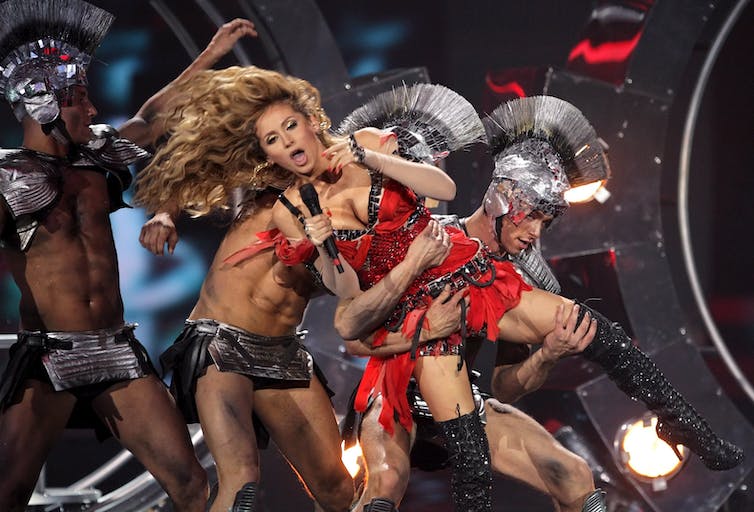 Svetlana Loboda of Ukraine sings during the second semi-final of the Eurovision Song Contest in Moscow, Russia 14 May 2009. EPA/YURI KOCHETKOV

Ukraine’s 2009 artist Svetlana Loboda performed in a burlesque costume as she was flipped around the stage by buff, gyrating, scantily dressed gladiators.

Burlesque, known for its eroticism and use in cabaret, was the perfect match for Loboda’s song “Be My Valentine (Anti-Crisis Girl)”, but Loboda and her gladiators were flanked by two statuesque Marie Antoinette-meets-Lady Liberty figures in silver lamé — perplexing bookends to a performance that was nothing short of chaotic. 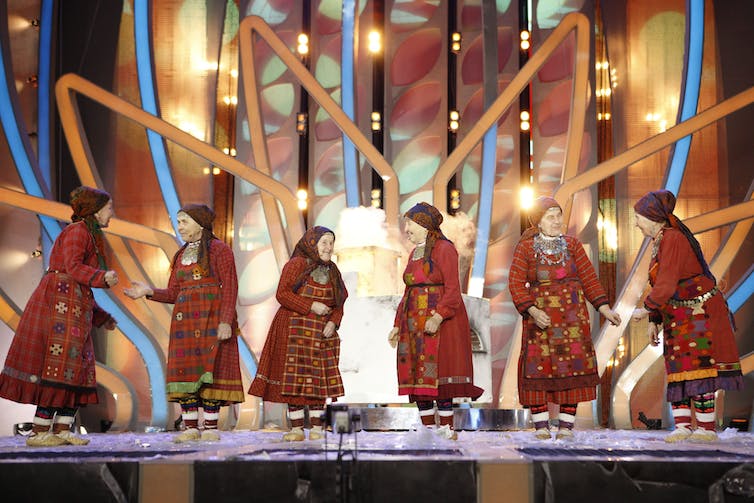 Eurovision is not just a competition for the young and sequinned. In 2012, Buranovskiye Babushki endearingly sang a mixture of folk and pop in traditional Udmurt dress.

The Udmurt people are an ethnic group from central Russia, and their traditional dress combines detailed embroidery with vibrant red fabrics in a tradition that reaches back centuries.

Over the course of Eurovision’s history, the Buranovskiye Babushki were perhaps the most faithful example of national dress — and their costumes remained unchanged by their Eurovision fame.

Dschinghis Khan is not Mongolian

It only becomes more bizarre when you realise the costume approximates nothing close to Mongolian dress.

Instead, Dschinghis Khan wore a bolero-style jacket covered by a golden cape and matching pants, topped by a rhinestone crown. A discerning eye might also catch the cavalier boots carrying the singer around the stage — another unlikely item of dress in the early Mongol empire.

The baffling Dustin the Turkey

Representing Ireland in 2008 was Dustin the Turkey. Almost improbably, the DJ — a Muppet-like bird with a large beak and a sequined jacket – was upstaged by the dancers’ deeply confusing assemblage of lamé, feathered headdresses and loincloths.

The only relationship you could glean from this frankly baffling arrangement was the colours of Ireland’s national flag. 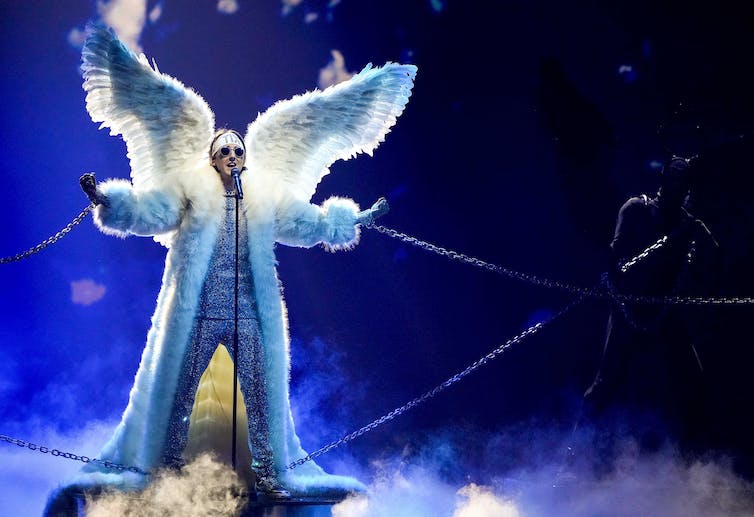 So far, the 2021 competition has not disappointed. Norway’s artist TIX combined enormous feathered wings with neck-to-toe sequins, headband and aviator sunglasses — in addition to an array of chains, a beastly dance crew of horned devils, pyrotechnics and the obligatory light show.

Whether you consider Eurovision a cultural cringe or you remain an unabashed die-hard fan, after 65 years it remains a true costume spectacle.

Read more: Australia is out of Eurovision but don't write off filmed performances: they could make for a greener, more global contest