Alarm bells rang internationally last week when Taiwan announced it was moving to its second highest COVID alert level after a recent surge of cases.

The recent increase in cases has led many people to wonder: what happened to Taiwan’s COVID success story?

One part of the answer is a very slow vaccine rollout. Australia should take heed.

How serious is Taiwan’s current outbreak?

On May 9, Taiwan recorded zero new community cases of COVID-19 (there was one imported case in quarantine). But only five days later, new local cases had risen exponentially to 29, and then to a peak of 333 on May 17. And on Saturday, the country’s health department retrospectively added an extra 400 cases to the previous week which were not included in earlier reports.

Although these numbers are still very low in comparison to many other countries, the fact that these new cases were spread across many cities and counties alarmed health officials. Previously, when Taiwan had its first peak — in March 2020 with 27 new cases — almost all cases were from overseas and were successfully isolated. Now the opposite is happening, with almost all new cases spreading in the community.

The current alert level three mandates wearing masks outside the home and limits people gatherings to five indoors and ten outdoors. This falls short of establishing a lockdown.

Taiwan is also temporarily barring any non-residents and transit travellers from entering the country. And there are restrictions on attending public venues, as well as sporting, entertainment and recreational events.

Level four, the highest level of the country’s restrictions would include the country’s first mass lockdown. This would only be triggered after 14 consecutive days of more than 100 cases, with 50% or more being of unknown origin. 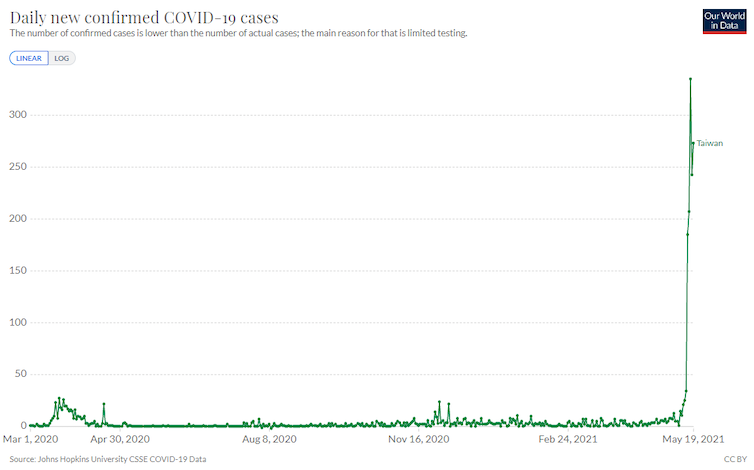 Until now, Taiwan was able to prevent the virus from spreading in the community, and contain it to a few imported cases, by its extensive public health infrastructure. This includes quarantine in a government facility or at home for incoming travellers, and quarantine of close contacts of positive cases. This infrastructure was established before COVID and enabled the country to respond quickly and in a coordinated manner to it.

Taiwan’s effective methods for isolation and quarantine were aided by using digital technologies for identifying potential cases, and widespread use of face masks.

This previous COVID success might have led to the government to focus on other priorities rather than investing in resources for mass COVID testing. Indeed, in Taiwan it hasn’t been seen as cost-effective to roll out mass testing without many (or any) cases.

Now, Taiwan has ramped up its testing capacity over the past week as much as possible, but still falls short in comparison to Australia, which conducts far more tests per 1,000 population.

Taiwan’s success also may have led to its people having less of an urgency to get vaccinated.

Where does Taiwan stand on COVID vaccinations?

Only about 1% of the population was vaccinated against COVID when this outbreak started.

Taiwan’s government invested early in developing a local vaccine, which has yet to come to market. This could be one explanation for why Taiwan came late to ordering vaccines from international suppliers, and is still awaiting further shipments from overseas.

Only last week did a second shipment of the AstraZeneca vaccine arrive in Taiwan through the global COVAX facility. However, this contained only 410,400 vaccine doses. Taiwan’s population is 23 million.

Whatever the reasons for the slow rollout of vaccines so far, for the time being and months to come, neither Taiwan nor Australia are even close to herd immunity against COVID.

Testing, tracing and isolation are still going to be important long into the future for both countries.

In saying that, even countries with the highest per capita vaccine rollout can suffer a new wave of the virus, for example Seychelles.

Read more: COVID is surging in the world's most vaccinated country. Why?

There may be outbreaks in places where not enough people have been vaccinated to achieve herd immunity, or where variants of the coronavirus are resulting in less protection in those vaccinated against the original strain.

Nevertheless, short of attempting to eliminate the virus by strict isolation (not only of cases but of the whole population from abroad) and severe quarantine or lockdown measures, getting everyone vaccinated as soon as possible is the best approach to a lasting COVID-free world.

Taiwan’s COVID surge demonstrates this virus has the capacity to break through isolation and quarantine barriers at any time, in any country. Many countries need to be better prepared.

The current situation in Taiwan should be a warning to other countries that you can’t let your guard down anywhere yet.