Disney’s new live-action Cruella transforms the infamous Dalmatian killer into an aspiring fashion designer who is driven to embrace the darkness and a life of crime.

It is the latest adaptation reclaiming female villains of fairy tales and children’s literature, providing them with an origin story — and extending them a degree of sympathy.

The female villain is common, in part, because of the Brothers Grimm.

As the Brothers collected and published fairy tales in the early 19th century, they progressively changed these stories to conform to appropriate morality for children. These alterations included silencing strong female characters and demonising powerful women — ensuring evil behaviour was clearly contrasted with good.

Children’s literature followed suit, with easily understandable divides between the good (and beautiful) and the evil (and ugly). L. Frank Baum’s one-eyed Wicked Witch of the West in The Wonderful Wizard of Oz was designated the “bad witch” in sharp contrast to the good witch, and to Dorothy.

But recent adaptations of these stories discard the usual focus on the “good” princess or heroine.

Instead of consigning the female villain to a simplistic caricature of evil, films such as Maleficent (the evil fairy from Sleeping Beauty) and the musical Wicked (the Wicked Witch of the West) offer nuanced (and newly beautiful) depictions of iconic foes. 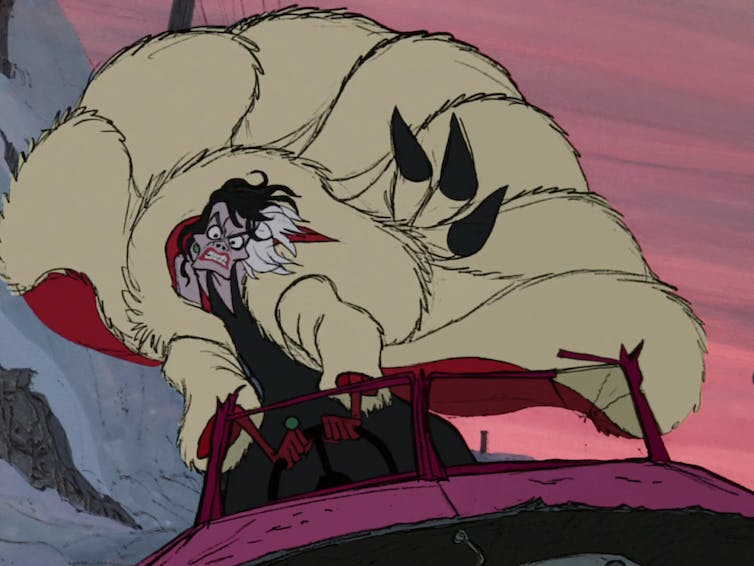 If she doesn’t scare you, no evil thing will. Disney

In Disney’s 1961 animated 101 Dalmatians, Cruella is angular and unattractive, with spindly limbs and a shock of half-black and half-white hair. She is a spinster; not maternal in any respect. She not only lacks her own children but seeks to harm puppies. She feels no concern for the young and vulnerable.

Vanity is Cruella’s final flaw, evident in her excessive interest in her appearance and the pleasure she takes in luxury objects, clothing and make-up.

The jazzy song that punctuates the film is thick with condemnation. Cruella is “like a spider waiting for the kill”, “a devil”, “vampire bat” and “inhuman beast” who “ought to be locked up and never released”.

Wanting to wear puppy fur is certainly alarming enough, but Disney’s animated film provides no other details about Cruella’s dark side, nor her motivations.

In Dodie Smith’s children’s novel on which the film was based, Cruella marries a furrier. The large stock of furs and coats she has not yet paid for are destroyed by the Dalmatians and her own Persian cat (who avenges the deaths of many litters of kittens that were drowned by Cruella) leaving the de Vils to flee England for their unpaid debts.

This new Cruella film encourages compassion by depicting the events that lead to a conscious embrace of wrongdoing. This incarnation was once Estella de Vil (Emma Stone), orphaned at 12 and growing into a teenager with a record of petty crime and a dream to work in the fashion industry.

Her fashion boss and mentor Baroness von Helman (Emma Thompson) advises Cruella not to care “about anyone or thing”, providing a model of self-absorption and vanity for emulation.

Cruella says she “was born brilliant, born bad, and a little bit mad” — but this film makes clear she was “made” from the damage and loss orphaned Estella experiences.

The current recuperation of the female villain follows the makeover of Gothic monsters such as the vampire in popular fiction and film. In Bram Stoker’s Dracula, vampires are repulsive and threatening. From True Blood to Twilight, today’s vampires are more commonly depicted as attractive love interests. 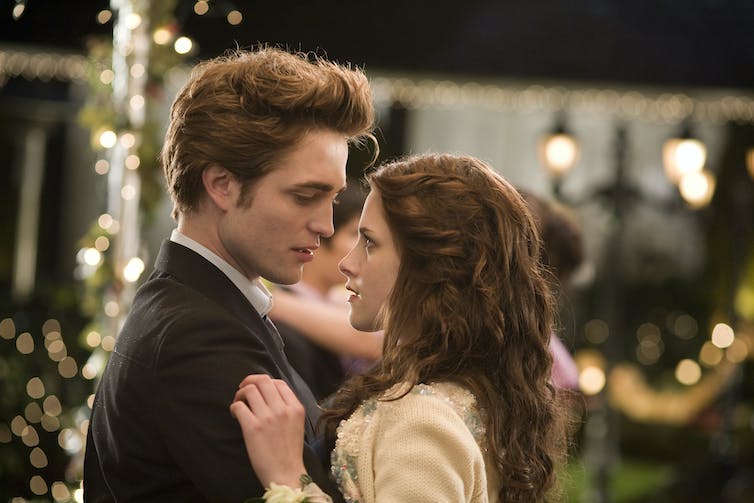 Edward Cullen was not your grandmother’s vampire. Summit Entertainment

The stories we tell have begun to both embrace the monster, and explain how they were created. Many cultures have lost faith in the grand narratives provided by former certainties in life such as religion. A sharp divide between good and evil is no longer as easy to maintain.

Well-known stories intended for children, such as those reshaped by the Brothers Grimm, were typically based on unambiguous morals that rewarded the good and punished the bad.

These new live-action adaptations introduce a more complicated sense of morality. While the actions of female villains may still be disturbing, the focus on their ill-treatment in early life humanises them and dismantles the idea of people being inherently “evil”. 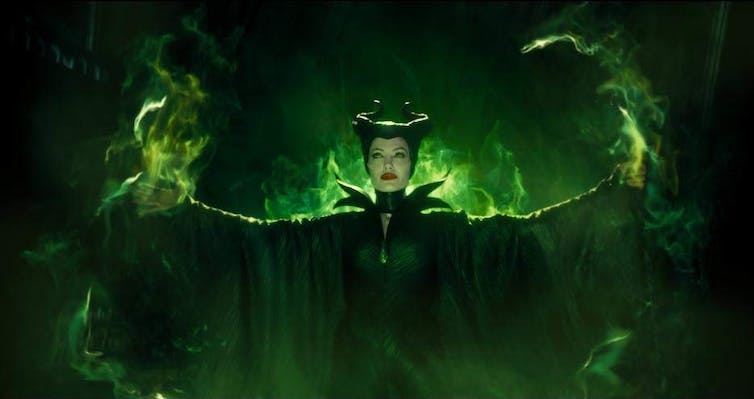 Some are not born evil, these reworking say, they have evilness thrust upon them. Disney

The short form of traditional fairy tales and children’s novels can offer minimal scope for characterisation, leaving us none the wiser as to what motivates the villain.

Why does Hans Christian Andersen’s disgusting Sea Witch (immortalised as Ursula in Disney’s The Little Mermaid) feed a toad from her mouth and make a doomed bargain with the poor mermaid? Andersen’s story (and the Disney film) give us no clues — but perhaps the upcoming live-action adaptation will.

Expansion of the stories of villains such as Maleficent, the Wicked Witch of the West, and Cruella not only complicate naïve ideas about good and evil, but also allow us to take pleasure in aligning ourselves with the antihero.

Just so long as no puppies are harmed in the process.