Review: My Name is Gulpilil, directed by Molly Reynolds

Since the start of his cinematic career, David Gulpilil has occupied the living embodiment of Indigenous Australia on screen. This is a significant responsibility — as is the task of doing justice to Gulpilil’s considerable legacy.

Molly Reynolds’ new documentary portrait, My Name is Gulpilil, allows us to spend time with the man in quiet moments of reflection as he nears the end of his life. Reynolds’ unobtrusive direction provides a platform from which Gulpilil reflects on his work, and shares his philosophy in his own words.

Candid, dreamlike and introspective, this film invites us to join Gulpilil as he searches his memories and tells us his story.

The face of Australian cinema

Gulpilil displays no false modesty when discussing his credentials as a performer in this film. Indeed, to chart Gulpilil’s career is to map the contours of the last 50 years of Australian cinema.

He made his acting debut as a teenager in Walkabout (1971). His performance displayed the lithe physicality that would define Gulpilil’s magnetic cinematic persona, his demeanour by turns taciturn and inscrutable.

Gulpilil became a fixture of the Australian New Wave with roles in Storm Boy (1976), The Last Wave (1977), and alongside a crazed Dennis Hopper in Mad Dog Morgan (1976). He was present for Australian cinema’s brief commercial peak, in Crocodile Dundee (1986), and for Phillip Noyce’s emblematic homecoming, Rabbit Proof Fence (2002). 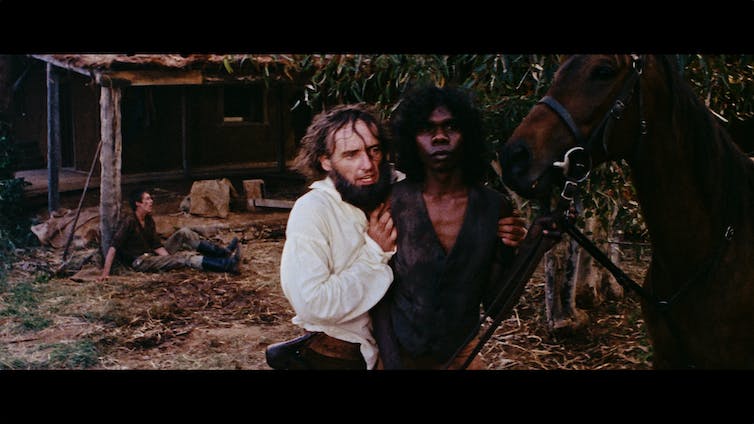 Gulpilil was a fixture of Australia’s New Wave of the 1970s, appearing in films like Mad Dog Morgan. ACBG Films

Gulpilil’s creative partnership with Rolf de Heer, a producer on this new documentary, began with 2002’s The Tracker, and extended through the ambitious Ten Canoes (2006) and Charlie’s Country (2013), for which he won the Un Certain Regard prize for Best Actor at Cannes.

More recently, Gulpilil appeared in Ivan Sen’s Goldstone (2016) aligning with a group of new filmmakers reinterpreting genre from an Indigenous perspective, and producing compelling work in the process.

Read more: Ivan Sen's Goldstone: a taut, layered exploration of what echoes in the silences

Reynolds previously followed Gulpilil for Another Country (2015), a companion documentary to Charlie’s Country which observed life in Gulpilil’s Ramingining community in Arnhem Land.

Another Country was a stark condemnation of culture clash and social disadvantage, a cry for self-determination in the face of destructive government intervention. That film was incendiary in its political outlook. My Name is Gulpilil is a more muted, introspective work.

Tania Nehme’s deft editing blends Gulpilil’s present day musings with historical interviews and memorable clips from his cinematic appearances. We hear of Gulpilil’s early life in a mission home, and his casting for Walkabout by director Nicolas Roeg on the basis of his dance prowess. 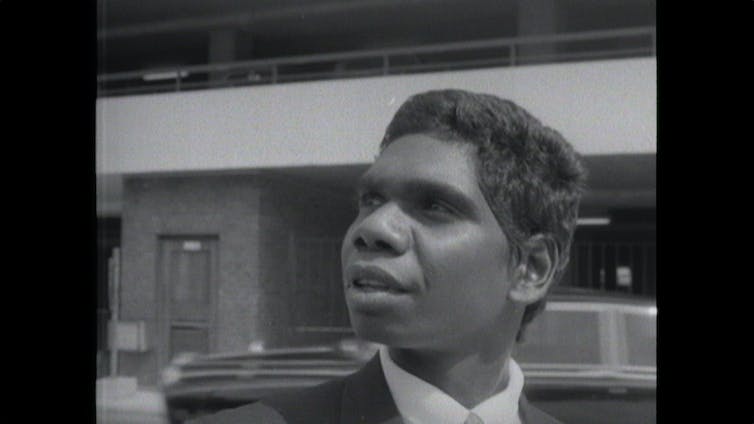 Excerpts from the Cinesound newsreel Walkabout: Star in London chronicle the teenage Gulpilil’s first trip to London and his encounters with prejudice and colonial condescension there: attitudes he countered with humour and grace.

The film’s most affecting material is its depiction of Gulpilil’s current life, spending his days modestly in Murray Bridge, southeast of Adelaide, and travelling to the city to receive cancer treatment.

When the film was commissioned by the Adelaide Film Festival following his 2017 cancer diagnosis, it was expected the documentary production would chronicle his final months, and stand as his epitaph. But Gulpilil has surprised everyone by defying the odds.

In his home, Gulpilil prepares himself for hospital visits, and shares humorous interactions with his dedicated live-in carer, Mary.

The film trades in resonant contrasts: the quietude and miniscule scale of his current world; the effort it takes for him to walk from his front door to his letterbox. His suburban back yard is juxtaposed with the enormity of the landscape he inhabits in his onscreen roles, and the distant land he longs for.

The camera accompanies Gulpilil while he returns to locations from his life and his films. Family members visit him at his new home for what will likely be the last time. 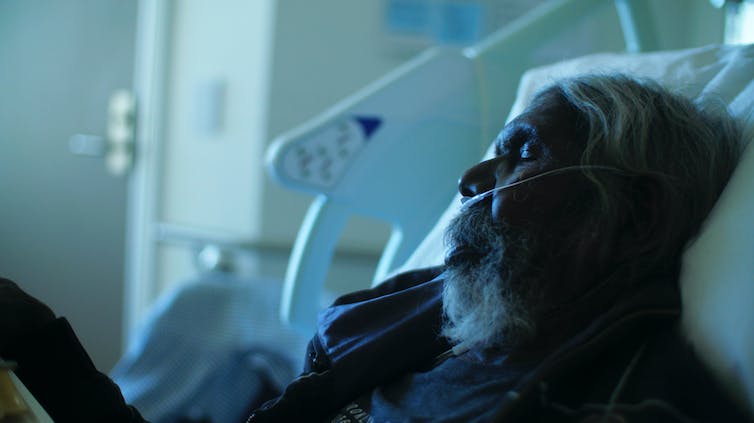 The most affecting footage follows Gulpilil in his contemporary life. ACBG Films

My Name is Gulpilil does not shy away from Gulpilil’s brushes with the law, his struggles with addiction, and the physical toll of the gruelling treatments he now receives. Gulpilil speaks openly about his impending death, his loneliness, and his plans for his funeral.

As it goes on, My Name is Gulpilil becomes a sensitive portrait of displacement, inviting us to consider both literal and metaphorical separation from ancestral lands, the possibility and impossibility of an eventual, final homecoming.

The film creates deft visual matches, woozily crossfading from aerial drone footage and starscapes to Gulpilil’s paintings and ultrasounds of his body. Reynolds draws an equivalence between the eternal, youthful vigour of Gulpilil in his early films, and the musings of his voiceover in the present day.

More than just a documentary meditation on mortality, the film is a collaborative cinematic self-portrait, including footage shot by Gulpilil on his camera phone.

A testament to cinema’s function as preservation, commemoration and memorial, My Name is Gulpilil celebrates its subject’s legacy — and the imprint he leaves as the star that brought Indigenous Australia to the world.

My Name is Gulpilil is in cinemas from May 27.