In 1904, when Anton Chekhov wrote his last and greatest play, The Cherry Orchard, Russia was still 13 years away from the Bolshevik Revolution. But the conditions for those future events were already all around him.

Rapid industrialisation and urbanisation had ensured old relationships with the land and between people were no longer sustainable. Serfdom, which had tied peasants to landowners in the bonds of slavery, had been abolished a generation before. Old certainties were slipping away in favour of a future that was probably already there but out of focus.

In the play, the cherry trees on the vast estate of the bankrupt landowner, Ranevskaya, have become so old and tired they only fruit every second year. There is nobody left who can remember what to do with them when they do. 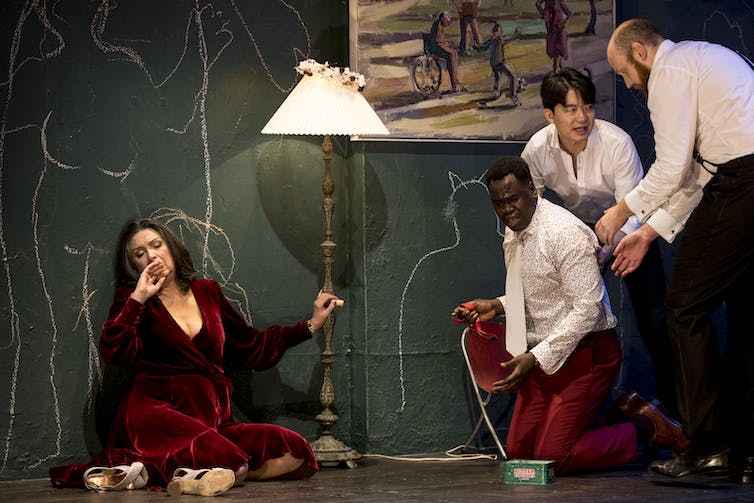 And all the while, the sound of axes chopping down the trees. Belvoir/Brett Boardman

A future out of focus

Belvoir’s production is timely. We are still emerging, bleary-eyed into a world we know has changed, and has been changing economically and environmentally for decades now. But we have no collective capacity to see or to control the horizons against which this change is taking place. Will this future that is already happening have room for people who live, behave and consume like we do? Probably not.

So, how should we behave now? Is it okay to cling to the past for as long as we can? Or should we already be living differently, be different? What does it mean to still laugh and enjoy company if these are the very things that might be shielding us from reality?

At the height of the gloriously insane third act of the play, Ranevskaya — here played by Pamela Rabe in a role she embraces with all of her considerable resources — shouts out, “This might not have been the best moment for a party!” You think?

As she and her extended family await the fate of the auction on their home, they drink, laugh, sing and dance. Until they don’t.

But Chekhov and director Eamon Flack both want us to laugh, and to laugh loud at the absurdities and ironies of the situation in which they find themselves. Chekhov insisted on his play being a comedy and Flack draws out its capacities for absurdity with what Belvoir audiences have come to recognise as his customary generosity of spirit.

This is a big, warm-hearted production. And the third act is central to this as characters all cling to actions and habits that make increasingly little sense in terms of their actual situation: from the brilliantly comic turns of Lucia Mastrantone as the governess Charlotta to the futile love affairs of Sarah Meacham’s Dunyasha.

Flack has a great directorial eye for presenting actions and gestures that have become unmoored from the social contexts that gave them meaning.

Read more: The lies of happiness: living with affluenza but without fulfilment

This sense of a future that is already disrupting the present condenses itself in the character of Lopakhin, here played brilliantly by Mandela Mathia. Lopakhin is the offspring of serfs who previously worked on the estate. He is now a wealthy bidder for the property.

Casting a Black actor in this role vividly adds racial context around the narrative of slave turned financial saviour. 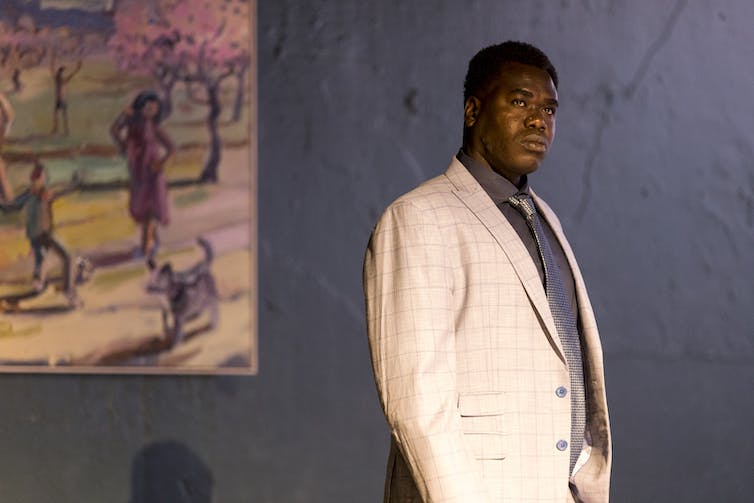 The play does not shy from its potential for tragedy. The last words go to the family’s old butler, here played to comic perfection by the inimitable Peter Carroll.

Firs is a servant who regrets the emancipation of the serfs and wishes he were still indentured to the family. As he lies down, alone and left behind in the deserted old house, he finally faces his situation: “Well, that was my life,” he says. “It’s just as if I’d never lived at all”.

All this to the soundtrack of the axes finally being taken to the cherry orchard, now auctioned off to recover the family’s debts. How to craft a comedy in the face of an ending that is seemingly so bleak?

Read more: Guide to the Classics: Samuel Beckett’s Waiting for Godot, a tragicomedy for our times

To laugh or cry?

Chekhov was famously upset The Cherry Orchard’s first director, Konstantin Stanislawski, played it for more for its pathos and tragedy than its comedy. But the ongoing critical question of the play’s tone or genre misses the point.

The play is a tragicomedy: not just a mix of the tragic and comic but an attempt to come to terms with their complex overlap.

Key to genuine tragicomedy is a sense of forgiveness: that we can forgive ourselves as much as we can forgive others. Take the ending of Shakespeare’s The Winter’s Tale. For that play to achieve the wonder of its final moments, the characters have to have gone through years of coming to terms with the tragic events that have set up the play’s narratives of loss and estrangement.

There is potential for forgiveness, too, in The Cherry Orchard, but it is a mark of the play’s modernity that we can’t quite be sure it will bring off a happy ending. 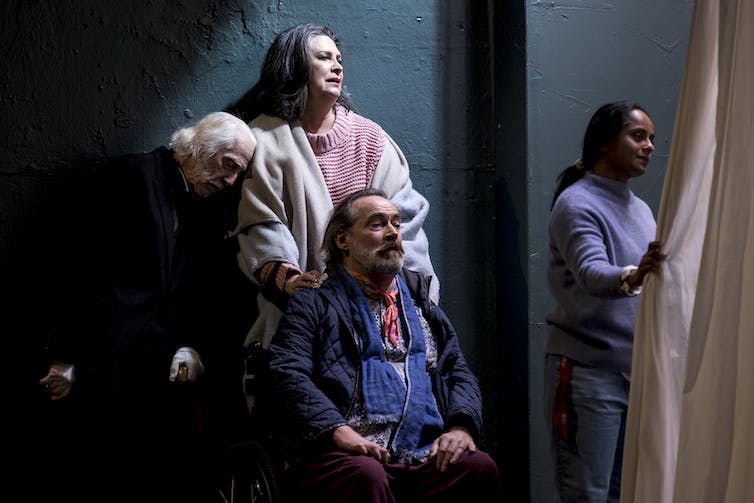 In one of the most affecting scenes of Belvoir’s production, Rabe’s Ranevskaya confronts the young student, Petya (Priscilla Doueihy plays the traditionally male role), angry at her idealistic and unforgiving belief she might be able to rise above current circumstances.

The older woman demands a more forgiving attitude that accommodates the attachments of the past. And that forgiveness is forthcoming, both from the young student and the production. She — and we — understand why so many of these people want to blind themselves to the abuses of the past and attach themselves to its comforting memories. And we forgive them for it.

But this forgiveness doesn’t bring reconciliation. The future happens anyway, whether we dance or not. The cherry orchard still gets chopped down.

The Cherry Orchard plays at Belvoir, Sydney, until 27 June.