On Monday, the image of a small girl in a hospital bed, crying as her big sister gives her a kiss flooded social media feeds.

The girls are Tharunicaa and Kopika Murugappan, the only two children in immigration detention in Australia.

The photo was released by advocates as three-year-old Tharunicaa was medically evacuated to Perth on Monday evening. She had reportedly been unwell for ten days with high temperatures, vomiting and diarrhoea, as her family called for more medical help.

It looks like they have said she has untreated pneumonia that led to a blood infection.

While the government denies there were treatment delays, it has once again raised the plight of the Tamil family, who have been detained since 2018.

Why are the family on Christmas Island?

Tharunicaa, her parents Priya and Nades and her sister, Kopika, have been in detention on Christmas Island since August 2019.

This followed a Department of Home Affairs attempt to deport the family from a detention centre in Melbourne to Sri Lanka. The deportation was interrupted mid-flight after an urgent injunction from the Federal Court. The plane was forced to land in Darwin, and the family was taken to immigration detention on Christmas Island, pending the outcome of their court appeal.

This came after the family had initially settled in the Queensland town of Biloela. Residents welcomed the family and have been actively campaigning for them to come “home to Bilo”.

Where is their legal fight up to?

The family has been engaged in legal appeals since 2012. Tharunicaa’s father and mother are both Sri Lankan nationals who arrived in Australia by boat in 2012 and 2013 respectively.

Read more: It's time to give visas to the Biloela Tamil family and other asylum seekers stuck in the system

Both parents applied for visas claiming they would be persecuted if they returned to Sri Lanka. Kopika was included in their application. But they were refused and appeals to tribunals, courts and the immigration minister were not successful.

Former home affairs minister Peter Dutton repeatedly said the family is not owed protection. They are part of a caseload who had their claims for refugee status determined under a “fast track” process. The Australian Human Rights Commission found significant issues with the “fast track” process and has called for a compassionate response to this family.

However, the family’s applications did not include Tharunicaa.

Current legal action centres around the obligations of the government to consider whether she can apply for a visa in Australia. As Tharunicaa is an “unlawful maritime arrival” she cannot apply for a visa unless the Home Affairs Minister (Andrews) personally intervenes.

Lawyers argue she has a strong claim for protection based on a range of factors including: the extensive media coverage of the family, the family’s Tamil ethnicity and their “purported” connections to the Liberation Tigers of Tamil Eelam (Tamil Tigers). 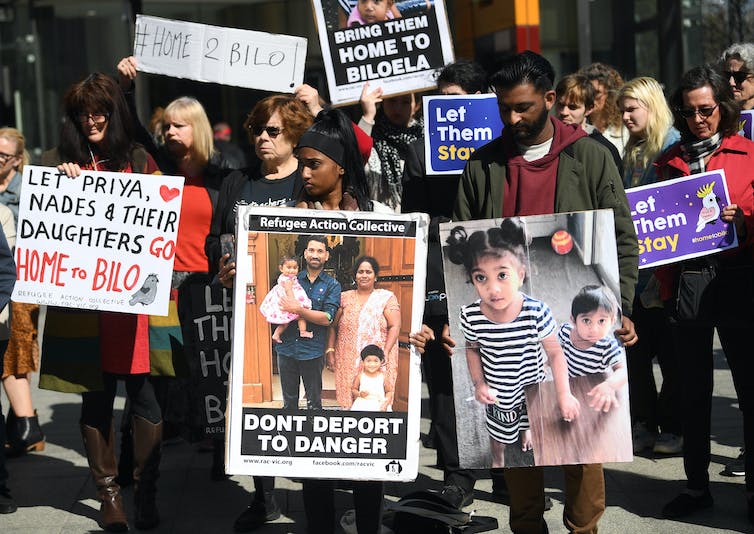 There have been ongoing protests in support of the family, calling for them to stay in Australia. Julian Smith/AAP

In April 2020, Federal Court Justice Mark Moshinsky ruled Tharunicaa had not given “procedural fairness” when her September 2018 request for permission to apply for a protection visa was rejected. That decision was upheld by the Full Court of the Federal Court in February. But further complicating matters, the court also found the immigration minister did not have an obligation to allow her to apply for a visa.

The ongoing litigation means the family will not be removed from Australia any time soon. But it is not clear whether the family or the government will take the next step and go to the High Court.

What are the ongoing health dangers for the family?

According to media reports, Tharunicaa had been unwell for ten days and did not get hospital access until this week, despite her families’ requests. As Priya said in a statement

She has been sick for many days, it took a long time for her to get to the hospital.

On Tuesday, a spokesperson for the Department of Home Affairs denied there had been any treatment delays.

The minor has been receiving medical treatment and daily monitoring on Christmas Island consistent with medical advice. This has included an IHMS general practitioner and the Christmas Island Hospital.

The Australian Border Force strongly denies any allegations of inaction or mistreatment of individuals in its care.

Health professionals have long warned of the difficulties of placing vulnerable people in remote locations such as Christmas Island. While primary care is available, there is poorer access to specialist and complex services.

In 2018, a Queensland coroner found delays in diagnosing and removing Iranian asylum seeker Hamid Kehazaei from Manus Island directly contributed to his death from septicaemia.

Tharunicaa has come to Perth with her mother, while her her father and sister have been left on Christmas Island. Last year, Priya was brought to Perth for treatment of an abdominal condition and had to leave the family behind.

This is a grave concern. There is a substantial body of evidence regarding child trauma to suggest that forced involuntary separation from family will have lasting mental health effects. The splitting up of the family will almost certainly compound existing trauma. Children are particularly vulnerable.

What can Karen Andrews do?

Andrews, as the senior minister responsible, is under increasing public pressure to do more for the family.

Dutton has previously said the reason the family was detained on Christmas Island and not the mainland was that it would allow them to be flown back to Sri Lanka without protesters putting Border Force officers in a “difficult position.” 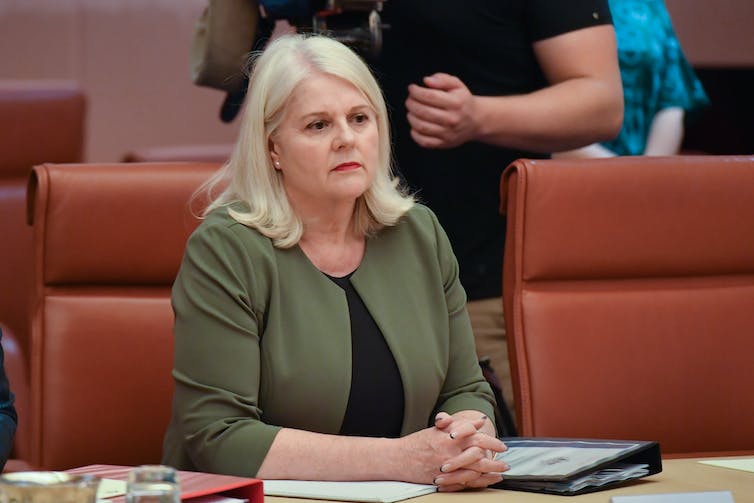 Due to their status as “unlawful maritime arrivals,” only Andrews or Immigration Minister Alex Hawke have the power to allow them to live in the community. This can either be on Christmas Island or on the mainland on bridging visas or in community detention. Andrews recently said she was taking advice on whether she would allow them to live in the community on Christmas Island.

On Tuesday she added the government was “investigating a range of resettlement options”.

The minister can grant any detainee a visa if they consider it to be in the “public interest” to do so.

The published guidelines on the exercise of this power states Andrews can grant a visa if a person has particular needs that cannot be properly cared for in a secured detention facility.

In 2013, we were involved in a case with then immigration minister, Scott Morrison. He intervened to release a woman with intellectual disabilities into the community with her family, stating that this was necessary due to her immediate mental health and welfare needs.

The health and welfare of Tharunicaa — at the very least — provides a clear reason to release the family from detention.