A new drug to treat Alzheimer’s disease was last week given accelerated approval by the United States Food and Drug Administration.

The drug is called aducanumab, commercially known as Aduhelm, and was developed by US biotechnology company Biogen.

This development is a game changer, because aducanumab is the first ever drug that targets the underlying cause of Alzheimer’s rather than simply the symptoms. Aducanumab is an antibody which targets and lowers a toxic protein in the brain called beta amyloid.

Approval of aducanumab has been a slow and painful journey for pharmaceutical companies, with many setbacks and failures since this approach was first investigated over 20 years ago.

While the drug will be available for use in the US, the FDA says further trials will be needed to conclusively determine whether or not aducanumab is clinically effective in treating people with early stage Alzheimer’s.

There’s considerable support from patient groups and many doctors and scientists for the early approval of this drug, but there are some who don’t agree with this decision.

This is because clinical trials of the drug showed mixed results. Trials suggested the drug could successfully lower levels of beta amyloid, but this didn’t necessarily cause patients’ memory or behaviour to improve in one of the two trials.

Alzheimer’s disease is the most common form of dementia. Its symptoms include worsening memory loss, confusion, concentration difficulties, and language problems.

Research indicates a key contributing factor to the development of Alzheimer’s is deposits of “amyloid” in the brain. Amyloid is a protein found in many organs in the body. The accumulation of amyloid in the brain is toxic and disrupts the normal functioning of the brain.

In the mid 1980s, I was part of a small team from Perth who isolated amyloid plaques from Alzheimer’s brains. This discovery was a huge development in helping the scientific community understand the condition, and in determining the direction researchers should follow to eliminate these plaques.

The team demonstrated the major protein component in the amyloid plaques is a small protein known as beta amyloid.

Why did a drug targeting amyloid take over 20 years to develop?

The journey to make an anti-amyloid antibody drug involved many companies using different methods, and over 20 years several companies had a go and failed.

Initial animal studies published in 1999 and 2000 used “active vaccination” by injecting beta amyloid into mice to generate antibodies against beta amyloid to treat Alzheimer’s. These studies showed profound effects, clearing the toxic proteins in the brain and improving memory.

However, a similar “active immunisation” approach in humans resulted in severe side effects and the trial was prematurely stopped in 2003. This was the first major hurdle.

Subsequent trials developed in part by Pfizer and Janssen used altered versions of the drug. Results published in 2014 showed a significant reduction in side effects. But its ability to remove beta amyloid from the brain was minimal.

This was the next hurdle. These versions, while relatively safe, weren’t potent enough to remove significant amounts of amyloid from the brain.

Then Biogen came in with a different version, now know as aducanumab. Studies published in the past two years suggest the drug can successfully and significantly reduce beta amyloid levels in the brain.

They stopped their two trials prematurely after not seeing any effects on memory. However, when they got their data from all the sites globally, they found there was an improvement of memory at a high dose, which led them to make an application to the FDA.

In saying that, its ability to reduce symptoms varied between the trials. One trial showed it reduced symptoms slightly, while the other trial showed no effect on improving memory and behaviour.

Overall, the drug successfully reduced brain beta amyloid in both studies but failed to show improvement in memory, learning and behaviour.

Three experts who were on a committee advising the FDA on the drug resigned after the approval decision. This committee had earlier decided not to endorse the drug. 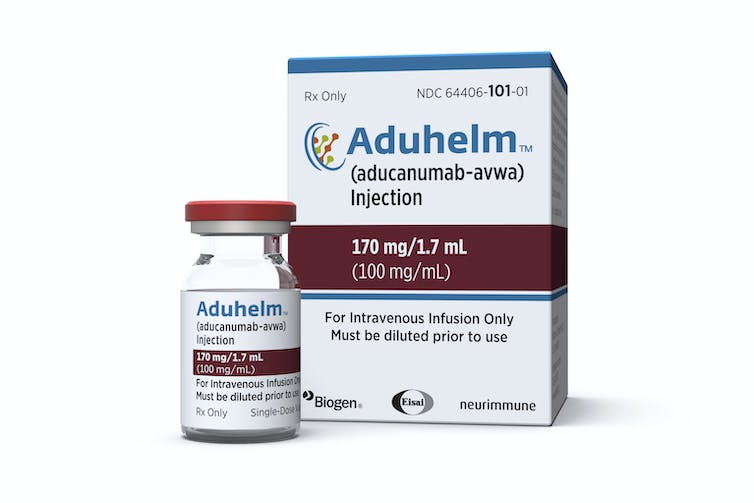 Aduhelm has been given accelerated approval in the US, even though it’s shown mixed results in human trials. Biogen/AP/AAP

Many scientists believe this failure might be due to the drug trials being conducted in people with Alzheimer’s where the disease has advanced to the stage that damage to the brain was irreversible.

It’s becoming clear that for greatest efficacy, early diagnosis is essential, preferably before the onset of symptoms. Such clinical trials are currently under way. These trials include people who have no symptoms but whose brains are shown to contain high levels of amyloid — that is, they don’t have Alzheimer’s symptoms yet but could soon develop them. They’re treated with the drug to determine whether the amyloid is reduced and whether memory decline is prevented.

It’s worth noting the approval of aducanumab will likely enhance activity in the pharmaceutical industry, paving the way for more effective drugs to be made available in the near future.

For example, a drug aimed at treating Alzheimer’s called Tacrine had serious side effects, but it led to more powerful current drugs with minimal side effects.

Who’s likely to benefit from aducanumab?

People with early stage Alzheimer’s, or even earlier.

Australia’s drug regulator, the Therapeutic Goods Administration, will make its own evaluation before deciding whether to approve the drug, though this isn’t expected until 2022.

The price of aducanumab is exorbitant, costing approximately A$72,000 per year. Government subsidies would be essential for most people to access this drug in Australia, and its high cost may encourage us to look for alternatives.

What’s considered good for the heart is also good for the brain, and these same lifestyle factors apply to Alzheimer’s.

There’s strong evidence at least 40% of Alzheimer’s is preventable. Research into how people’s lifestyle could be modified to prevent Alzheimer’s is ongoing.