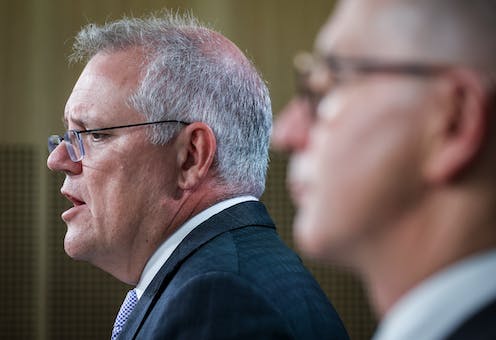 Public trust is critically important during the pandemic. Without it, the changes to public behaviour that are necessary to contain and ultimately prevent the spread of infection are slower and more difficult to achieve.

In mid-2020, Australia was widely viewed by the public as having successfully managed the pandemic, especially...

Public trust is critically important during the pandemic. Without it, the changes to public behaviour that are necessary to contain and ultimately prevent the spread of infection are slower and more difficult to achieve.

In mid-2020, Australia was widely viewed by the public as having successfully managed the pandemic, especially compared to the US, UK and other European countries. Australians’ trust in their government almost doubled in a year from 29% to 54%.

The same is not the case today. Australia remains locked down with a stalled vaccine rollout, while the US, UK and other countries are opening up. And public trust in the government is eroding.

The latest Essential poll last week showed people’s support of the government’s handling of the pandemic sliding nine points from 53% to 44%. And 30% of respondents described the government’s COVID strategy as poor, compared to 24% a month earlier.

Why people tend to trust government in crises

It’s common for people to show support for their leaders during crises. In the initial stages of the pandemic in early 2020, surveys showed leaders in a large number of countries enjoyed an increase in public confidence.

The approval rating of Italian Prime Minister Giuseppe Conte hit 71% in March 2020 – 27 points higher than the previous month – despite the fact his country was in the throes of a deadly first wave of the pandemic.

German Chancellor Angela Merkel saw her approval rise to 79%, while the prime ministers of Canada and Australia, Justin Trudeau and Scott Morrison, saw similar surges in popularity during the early months of the pandemic. 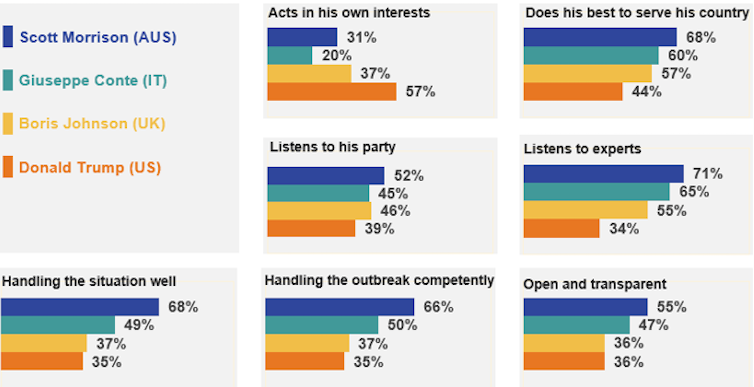 Perceptions of political leadership during the pandemic, July 2020. Adapted from Will Jennings and others, 2020, Political Trust and the Covid-19 Crisis – pushing populism to the backburner?, Author provided

The upsurge of support is partly explained by what is called the “rally-round-the-flag” effect.

In Australia, Morrison’s approval rating soared on the back of his effective handling of the initial threat, judicious decision-making on early closure of international borders and an atypical coordination of state and federal governments via the National Cabinet.

Moreover, a severe threat like a pandemic can make people more information-hungry, anxious and fearful. COVID has become a powerful shared experience for people. It touched most households through people’s connections with health and social care workers and their communication with relatives, co-workers or friends who were in lockdown or unfortunate enough to get sick.

Read more: Just the facts, or more detail? To battle vaccine hesitancy, the messaging has to be just right

Yet, research also suggests many people do not lose their capacity for reason or critical judgement in a crisis. For example, people can oppose wars or other heavy-handed responses to terrorist attacks even if such attacks make them more anxious or fearful.

Above all, the competence and outcomes of the government’s actions matter. If the government is perceived as not able or willing to adequately respond to a threat, then public support will fade.

How government can get public trust back

Fast-forward to today. The Australian public is disenchanted with the slow rollout of the vaccine program and mixed government messaging over the relative risks of the AstraZeneca vaccine. This has punctured public trust in government in a very short period of time.

At the same time, people are proving highly vulnerable to fake news and conspiracy theorists, who are taking advantage of mixed messaging by government to try to sow more confusion.

The dangerous implication of all of this: it’s fuelling vaccine hesitancy. One in six Australians now say they will never get a COVID vaccine, according to a recent poll.

So, what needs to be done to reverse the decline in public trust of the government? The Organisation for Economic Cooperation and Development (OECD) has provided some timely guidelines that suggest the need for greater community engagement.

This can be achieved by the government taking these steps:

Read more: Morrison's 'new deal' for a return to post-COVID normal is not the deal most Australians want

The public needs to have its say

At the start of the pandemic, co-designing strategies with citizens was a low priority. But in the later stages of crisis management when behavioural change – in this case, vaccine take-up – becomes critical to containing the virus, you ignore the views of citizens at your peril.

Moreover, in the recovery stage – when it’s time to reflect on the government response, take accountability for missteps and draw lessons for the future – citizen engagement becomes even more important.

As inquiries are eventually launched to explore what went right and what went wrong with the coronavirus response, the public must be invited to the discussion.

And there are models for how to do this. Just look at the citizen’s assemblies that have been formed in France and the UK to push for greater action on climate change in the post-COVID global recovery.

There’s no way of knowing if COVID-19 could have been managed more successfully if there had been more public participation and debate from the start, given the whirlwind of uncertainty and the need for rapid decisions to tackle a crisis.

But there is little doubt that at some point the public will have to have their say. Important nationwide discussions need to be had on how best to limit the creep of executive power, how to better facilitate public debate in a period of high anxiety, and how to get the best out of the experts.

Read more: View from The Hill: No, this isn't based on the medical advice

How to combat misinformation?

And what about the longer-term problem of combating truth decay in society?

Finland, Sweden and the Netherlands have an effective weapon to combat fake news: education. These countries all include digital literacy and critical thinking about misinformation in their national curriculums.

This is where Australian public universities can play a critical role by providing independent, evidence-based, fact-checking services in their areas of expertise to the community. This is essential not only to combat truth decay, but to strengthen our responses to future crises.