The Australian government’s new national vaccination advertisements have been described as exciting as a bowl of leftover cereal, with all the urgency of a stubbed toe. “It will be very difficult for Shaun Micallef to send this ad up,” said Opposition leader Anthony Albanese when asked about them on Sunday morning television.

The “Arm Yourself” campaign — featuring various upper arms showing a bandaid and iterations of the same message to arm “yourself”, “your family”, “your community” — could easily come from a presentation by Karsten Leith, the kravat-wearing marketing consultant in the ABC comedy series Utopia.

The adverts have apparently been in the can for months, put on ice due to there being little point encouraging anyone to join an already long queue for vaccines. 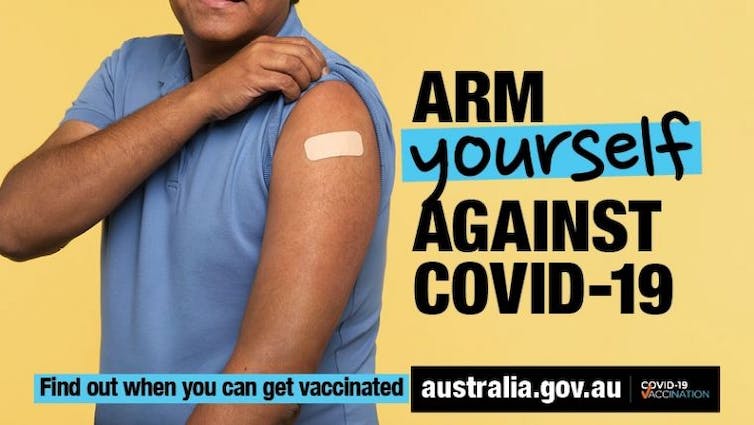 Now that they are being wheeled out, it is hard to know exactly what they are meant to achieve. With all the allure of airline safety videos, they fly in the face of decades of research on effective advertising. They do little to engage the hesitant.

Nor is the “graphic” side campaign for Sydney-siders, portraying a distressed young woman on a ventilator in a hospital bed gasping for air, any better. To be persuasive and change attitudes and behaviours, advertising campaigns must astutely balance rational and emotional appeals.

For decades researchers have studied how advertising can influence people’s decision-making. A cornerstone contribution to this is the “hierarchy of effects model”, which suggests audiences go through both cognitive (rational) and affective (emotional) stages before they act (respond to the advertisement).

The most effective way to motivate behaviour is to blend the rational with an emotional message.

A good example of this is Singapore’s Get Your Shot, Steady Pom Pi Pi campaign.

It addresses safety concerns but in a humorous way — through an “informative disco” sung by a well-known and beloved character from the popular sit-com Phua Chu Kang Pte Ltd, which aired on Singaporean television from 1997 to 2007.

This layering of emotional and rational appeals through a colourful, slapstick performance drives home the call to action to “faster go and vaccinate”. The video has been viewed more than 1.5 million times on YouTube to date (Singapore has a population of about 5.7 million).

The Victorian government did something similar with its campaign to encourage adherence to hygiene and distancing rules during the state’s lockdown in 2020. That featured Magda Szubanski’s character Sharon from the iconic Kath and Kim sitcom.

Read more: Parental COVID-19 vaccine hesitancy may be next challenge for vaccination campaigns

Another good example of integrating rational and emotional appeals is New Zealand’s Ka Kite, COVID (“see you, COVID”) campaign. Though without the “star power” of the Singapore campaign, it features instantly likeable and relatable characters — including cheeky teens and jazzercise dancers — to emphasise the idea of ordinary Kiwis coming together to protect themselves and the community.

It also offers a key motivator for getting vaccinated. In the ad, a health worker describes a vaccination centre as “the metaphorical door to freedom”. Scenes frame the different ways a return to normal can be enjoyed — from being reunited with family members to children playing together and a couple planning their wedding.

It drives home the rationale that vaccination benefits the entire community through three highly engaging emotional appeals to New Zealanders — their sense of belonging, humour and optimism. This brings home the campaign tagline to “Unite against COVID-19”.

Getting the balance right

The Australian Government’s vaccination messaging is struggling to finding this balance.

Its first vaccination campaign, launched in January, relied too strongly on a rational appeal.

In it infectious diseases physician Dr Nick Coatsworth promotes the vaccine as backed by experts, closely monitored for safety by the Therapeutic Goods Association and “free, simple, and the best way to protect ourselves against COVID-19”.

It was criticised as boring, sterile and too densely informative, making an ineffective call to action. It has been viewed on YouTube fewer than 1,200 times.

The new “graphic” advertisement for Sydney audiences swings in the other extreme, by relying solely on stimulating an emotional response through fear.

Australia has a long tradition of fear appeals in public health campaigns. The most famous is the “Grim Reaper” advert in the 1980s. This campaign was certainly memorable, but the evidence from research in more recent decades about the effectiveness of fear-based messages is mixed. Studies show they don’t necessarily stimulate action.

The new national “Arm Yourself” campaign is arguably even worse — failing to effectively executive either an emotional or rational appeal. It provides little information beyond a metaphoric battle slogan. Its primary call to action is to visit a website. It lacks the powerful imagery, stirring music or relatable characters needed to engage the audience.

The government’s story is that this phase of the campaign is focused on encouraging Australians to get vaccinated. If that’s the case, it needs to go back to the standard advertising playbook.

This is another missed opportunity to alleviate fears and align with the broader pandemic messaging of community spirit and solidarity to encourage a high uptake of the vaccine by Australians of all ages.