Global developments in tertiary education suggest the critical scientific study of religion is endangered. One of the departments slated for extinguishment amid the pandemic-related upheavals was my own at the University of Sydney. This reflects a trend that has captured the academy in Australia and worldwide.

If we take South Australia as an example, over the past decade programs for the critical study of religion at the University of South Australia have been almost completely extinguished, while programs in theology, such as at Flinders, find their future assured. On the east coast, studies of religion programs at the universities of Queensland, Monash, Deakin and Newcastle have been wound back greatly, bled into “multidisciplinary” programs, or closed. Departmental identities have been terminated. What isolated staff are left teach just a handful of electives.

In the United States, Boston and University of California Berkeley have wound down or shut their programs, as has Stirling in the United Kingdom. A range of American colleges are just not teaching religion critically any more.

How do studies of religion and theology differ?

Part of this move to kill the academic study of religion comes from ignorance of what it entails. It is generally accepted that an historian studies history because they want to know what really happened. In contrast, the general assumption is that if a scholar studies religion, then it can only be because they have motives that are only partly scholarly. This is untrue, but the long shadow of theology unhelpfully hangs over us.

Once theology was seen in the Western academy as the “queen of the sciences”. The study of Christianity and its philosophies was considered the keystone of all other knowledge. 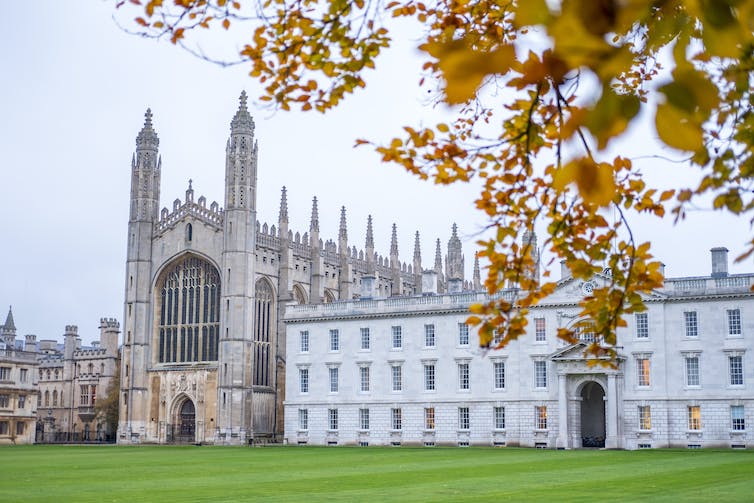 The legacy of the time when theology was ‘queen of the sciences’ can clearly be seen in King’s College at the University of Cambridge. Shutterstock

This began to break down in the 18th century. Ideas that seemed resolutely Christian began to have Egyptian origins, or show links to the Persian religion of Zoroastrianism, or were connected to the Roman cults of Mithra or Isis.

Read more: Get literate in myth, religion and theology

Theology was further removed from its queenly status when geologists showed us the age of the planet was many millions rather than thousands of years old. Then, of course, came Charles Darwin’s On the Origin of Species in 1859. A few decades later Friedrich Nietzsche finally declared God dead.

Yet Christian theology was deeply embedded in the university system. Despite a revolution in faith, the development of the secular state and rising adherence to atheism, theology still influences our understanding of how scholars study religion today. Partly this is because many age-old theology departments continue to survive in the academy.

Their primary aim is to make Christianity fit for purpose in modernity (and therefore to stem the flow of apostates and retain its power in the public sphere). This is not an ideal nor inclusive academic aim in our multicultural, multifaith world. These centres will continue to survive because of church and other external funding as much as by the force of tradition.

Additionally, the uneasy relationship between religion and secularism makes cutting the scholarly examination of religion the lazy go-to for management in their present war against humanities education. They see it as not being industry-focused nor turning out “job-ready” graduates.

During the 20th century, the badly evidenced “secularisation” theory posited that religion would eventually die out as our states became more secular and scientific. This is clearly not happening – although it might seem to some that it is.

Inside modern multifaith democracies, religions honour an unstated social contract by mostly keeping themselves away from our public spaces. This curated invisibility does not mean religions are ceasing to exist. It also means their influence on public policy can be much more discrete. Unless these influences and behaviours are critically examined by experts trained in religious literacy, they can go unseen.

Religions have shaped and will continue to shape our social, cultural and political structures. We have a Pentecostal prime minister, and faith-based lobby groups are constantly vying for our politicians’ ears. We have new religions constantly coming into being. 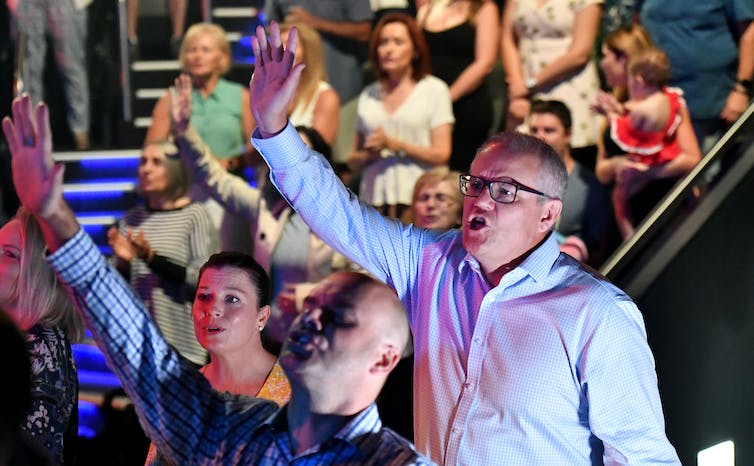 Religion continues to have a powerful influence over the lives of Australians, including a Pentecostal prime minister in Scott Morrison. Mick Tsikas/AAP

Read more: Explainer: what is Pentecostalism, and how might it influence Scott Morrison's politics?

And religions can, on rare occasions, threaten our security. Yet a careful examination of our suburbs will demonstrate the significant contributions a wide range of global religious communities make to social cohesion and community prosperity. The facts of these developments will go uncharted if theology is the only academic paradigm for examining the spirituality of our nation.

What happens if we lose religious studies?

The consequences of the closures of religious studies programs are clear: in a world that ceases to be critically aware of religion, religious authority is strengthened through an ignorance that can be shrouded in mysticism. If the only chance we have to study religion at the tertiary level is through a Christian, theological viewpoint, then Western universities are returned to shoring up the high status of one religious tradition over all others.

Read more: Want a safer world for your children? Teach them about diverse religions and worldviews

While theology continues to focus strongly on the faith study of Christianity, at Sydney we find one of the last departments in Australia where the critical investigation of all religions still takes place. It is a necessary part of the academy and yet its closure is quite possible.

Abolishing what is left of the critical study of religion on our campuses will allow theology, biblical studies and other faith-focused fields to determine how our graduates examine religion. This will not be through the scholarly tools of science, sociology or history, but through close study of scripture and church philosophy.

University campuses more generally will be affected, too. Students and staff will become less critical of religious claims when they see no scholarly force with the religious literacy and confidence required to seriously question those claims.