There’ll be two types of Australian high jump in Tokyo this month. The first, most likely scripted, was Queensland Premier Annastacia Palaszczuk’s front row leap after Brisbane was awarded the right to host the 2032 Olympics.

The second will be in response to Australia winning any medals.

Palaszczuk’s leap is also a plunge into an uncertain future.

For the next 11 years there will be much debate about whether it’s worth it.

As this will be the 35th Olympiad, there is a lot we already know. Most Olympics cost a lot more than planned, and most lose money.

Most games cost more than planned

The researchers found that every Summer and Winter Olympics since 1960 has run “over budget, at an average of 172% in real terms, the highest overrun on record for any type of megaproject”.

Cost overruns at the Summer Olympics since 1976

Regression to the Tail: Why the Olympics Blow Up, Oxford University 2000 That average will climb after the staggering losses of Tokyo 2020-21. The Sydney Olympics may cast a nostalgic glow, but it didn’t produce the promised ongoing tourist bonanza or long-lasting infrastructure. Some 17 years after the games NSW Premier Gladys Berejiklian flirted with the idea of demolishing its purpose-built stadium. Hosting the Olympics and Paralympics became such a loss-making proposition it severely reduced competition among bidding cities, leading the International Olympic Committee to award two games at once in 2017, handing the 2024 games to Paris and the 2028 games to Los Angeles. It dealt with Brisbane on the understanding there would be little competition. 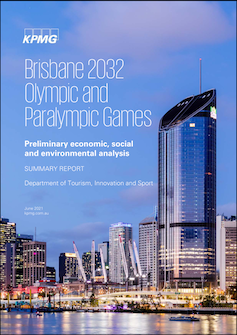 The Brisbane study claimed 'intangible benefits'. With economic benefits from hosting games hard to find, backers and consultants point to “intangible benefits”, among them community spirit, civic pride, increased physical activity and volunteering, and better mental health, all claims made in the study conducted for the Brisbane games. ‘Intangible’ benefits But just as most Olympics don’t make money, few produce a sustained increase in participation in sport, of the Olympic kind or any other. Many people do indeed enjoy being in the Olympic host city during the event itself. Sydney 2000 and London 2012 were party central in my experience. They became urban carnivals in which strangers conversed unsuspiciously on public transport and in the streets. Even inveterate sceptics indulged in pantomime flag waving. But Olympic colour and noise can be deceptive. Read more: Leaner, cost-effective, practical: how the 2032 Brisbane Games could save the Olympics While sport is an important part of popular culture, a large part of the population abhors or is indifferent to it. Research I conducted with colleagues during the Sydney Olympics revealed a wide variation in perspectives across Australia. Many around the world think the Olympics are elitist and divisive, disrupting communities for the benefit of the born-to-rule Olympic family and well-heeled rusted-on fans. There is already some local opposition to the 2032 games in South East Queensland and many citizens need to be convinced of their worth. The South East Queensland games Every Olympics, we are told by hosts and sympathisers, will be different and better. It is always said that lessons have been learnt, in this case that Brisbane will remain within budget. Existing venues (some built for the 2018 Commonwealth Games) will be used wherever possible. The new facilities that are built are intended to be productive and viable, rather than white elephants. Despite its name this will be a regional rather than city-based event, claiming to spread its legacy benefits along Olympic-enhanced transport corridors. Read more: Reduce, re-use, recycle: how the new relaxed Olympic rules make Brisbane’s 2032 bid affordable History suggests much of this will be wishful thinking. A major part of the aim is to recast Brisbane as an international city able to hold its own alongside Australia’s current Olympic cities, Melbourne and Sydney. Brisbane 2032 will show a lot of people a good time. But questions of its legacy, good and bad, will take decades to resolve.