Are the Liberals liberal? Does the Labor Party stand chiefly for those who labour? Electoral politics is nothing if not about wrapping ideas - about values and power - in words.

On Friday, the Morrison government introduced a Party Registration Integrity Bill to the Commonwealth parliament. The bill would...

Are the Liberals liberal? Does the Labor Party stand chiefly for those who labour? Electoral politics is nothing if not about wrapping ideas - about values and power - in words.

On Friday, the Morrison government introduced a Party Registration Integrity Bill to the Commonwealth parliament. The bill would let established parties veto the use of words like “Liberal”, “Labor” or “Democrats” in the names of newer, rival parties. It will also make it harder to register - or keep registered - parties, by tripling the number of members required to 1,500, unless the party has an MP.

What is going on? Is this about democratic values, or is it a power play?

People may differ about the bill’s justification. But one thing is clear to a lawyer: as drafted, the bill is cooked. It overreaches and is not well drafted.

To take an obvious example, the bill will let the Liberal Party control the word “Liberal”, if “contained” in the name of any other registered party. That includes the Liberal Democratic Party of ex-senator David Leyonhjelm and potential-senator Campbell Newman fame.

The Liberal Party is also upset by the emergence of the New Liberals. But “Liberals” is not the same as “Liberal”. Indeed it’s a noun, not an adjective. So perhaps the bill won’t cure that upset.

Mere “function words”, like “the” or “of” don’t count. Nor is any “collective noun for people” protected. Think “party” or “Australians”. Linguists will be left to argue whether collective nouns like “Liberals” or “Greens” are off-limits. Can “Indigenous” be bagsed? Your guess is as good as mine.

“Frivolous and vexatious” names will also be struck out. So no Australian version of the UK’s Monster Raving Loony Party. Oh, the shame; if Brits can take a joke, why can’t we?

Australia’s most colourful political figure is currently seeking to remove his own name from his Clive Palmer United Australia Party. But if he doesn’t, he could forever veto anyone else called “Clive” or “Palmer” naming a party after themselves. Real names are not “function words”.

More seriously, handing one party squatter’s rights over everyday words is troublesome. It creates a virtual intellectual property right. That is fine for trademarking commercial goods; it’s another thing altogether in politics, where language is dynamic and fundamental. Worryingly, it gives leverage to established parties. They could ask a newer party for its support (with legislation or electorally) in return for permission to use the overlapping word in their name. 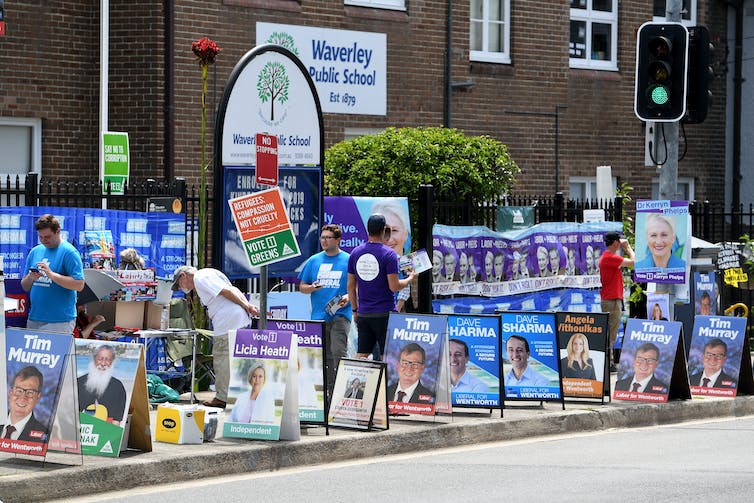 The government argues the bill is needed to minimise voter confusion. But there’s still plenty of confusion within the bill’s language. AAP/Dan Himbrechts

The government argues the bill is needed to minimise confusion among electors. After all, compulsory and preferential voting means identifiable names on ballot papers are crucial, as most electors vote for parties, and some only decide their full preferences when mulling the ballot itself.

Why does party registration, and names, matter? Anyone can form a political group. But to have your group’s name on the ballot paper, and control public funding for garnering 4% of the vote, you need to register as a “party”.

Before registration systems arose in the 1980s, Australian politics was largely a battle between Labor and the Liberal-Country Party Coalition. Other forces came and went, often via splits in the major groupings.

The Liberal Movement was a progressive liberalist party in the 1970s, while the Democratic Labor Party (DLP) had success as a socially conservative, but union-oriented, party in the 1950s-70s. Their names were natural enough.

Australian parties today are electoral machines more than social movements. Each, understandably, wants to guard its “brand”. Infamously, the Liberal Democratic Party won a Senate seat in 2013 when it lucked the first place on a huge ballot paper while the Liberal Party was hidden in the middle.

Read more: High Court challenge in Kooyong and Chisholm unlikely to win, but may still land a blow

In response, laws were passed to allow visual cues on ballot papers, via party logos. And the independent Australian Electoral Commission (AEC) and courts can already rule whether a name can be confused with another party, or implies a false association.

In recent decades, registered parties have proliferated, partly due to opportunists wanting a ticket in the lottery of the final Senate seat up for grabs. That gambit has been significantly nullified by making voters choose where their preferences go (if anywhere) in the Senate.

That leaves the long-term decline in voter base of both major parties as the chief driver of the creation of new parties. For national elections, there are 46 registered parties. In Queensland, without a state Senate, there are barely a dozen. Is too much potential choice a bad thing?

Forty-six is a lot, but some will die naturally. Others will be wiped away by the increased, 1,500-member rule. Which is fair enough, unless you are a regional party focused only on the Senate in a small state or territory. The 1,500-member rule also won’t deter parties formed by wealthy interests, if the party can afford a zero-dollar membership “fee”.

Ultimately, this bill is dubious not because of mathematics, but linguistics. It gives established parties control over language. Not even the Académie Française, much lampooned for its elite rulings over how French should be used, has that kind of power.