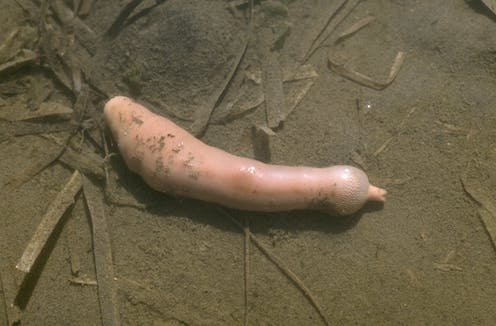 Am I not pretty enough? This article is part of The Conversation’s new series introducing you to the unloved Australian animals that need our help.

Australia’s oceans are home to a startling array of biodiversity — whales, dolphins, dugongs and more. But not all components of Aussie marine life are the...

Am I not pretty enough? This article is part of The Conversation’s new series introducing you to the unloved Australian animals that need our help.

Australia’s oceans are home to a startling array of biodiversity — whales, dolphins, dugongs and more. But not all components of Aussie marine life are the charismatic sort of animal that can feature in a tourism promotion, documentary, or conservation campaign.

The echiuran, or spoon worm, is one such animal. It is also called the penis worm.

There is no “Save the Echiuran Foundation” and no influencers selling merchandise to help save them. But these phallic invertebrates are certainly worth your time as integral and fascinating members — of Australia’s marine ecosystems.

What makes them so interesting?

Taxonomists have classified echiurans in various different ways over the years, including as their own group of unique animals. Today, they’re considered a group of annelid worms that lost their segmentation. There is uncertainty about the exact number of species, but an estimate is 236.

The largest echiuran species reach over two metres in length! They have a sausage-shaped muscular trunk and an extensible proboscis (or tongue) at their front end. The trunk moves by wave like contractions.

Most echiurans live in marine sand and mud in long, U-shaped burrows, but some species also live between rocks. And they’re widespread, living up to 6,000 metres deep in the ocean all the way to the seashore, worldwide. 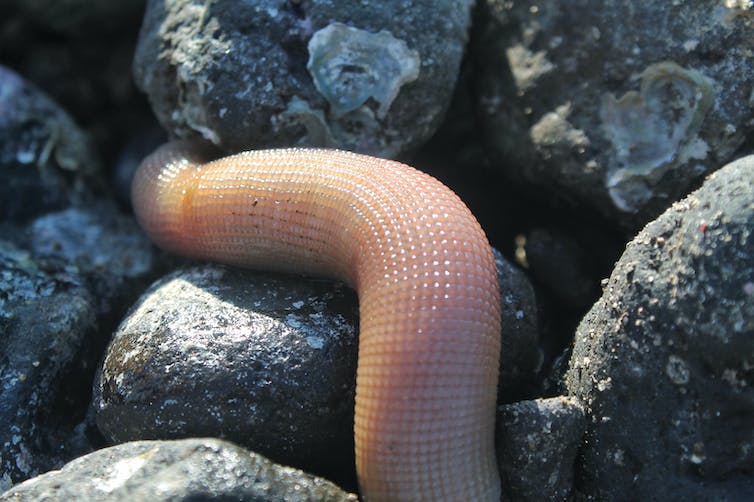 Some species live between rocks. Shutterstock

For example, one species, Ochetostoma australiense, is a common sight along sandy or muddy shorelines of Queensland and New South Wales, where it sweeps out of its burrow to collect and consume organic matter.

In fact, their feeding activities are something to behold, as they form a star-like pattern on the surface that extends from their burrow opening.

In another species, Bonella viridis, there is a striking difference between the males and females — the females are large (about 15 centimetres long) and the males are tiny (1-3 millimetres). Most larvae are sexually undifferentiated, and the sex they end up as depends on who’s around. The larvae metamorphose into dwarf males when they’re exposed to females, and into females when there are no other females present.

Males function as little more than a gonad and are reliant on females for all their needs. 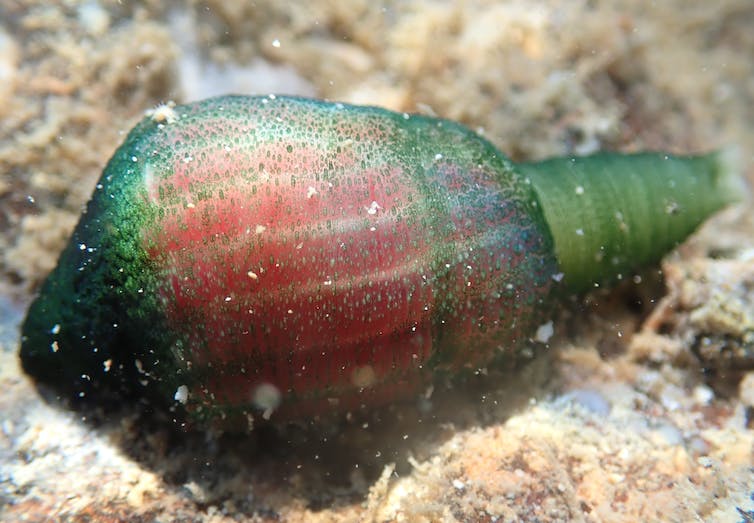 Another common name for the penis worm is the fat innkeeper worm. Alison Young/iNaturalist

Why they’re so important

Echiurans perform a range of important ecological functions in the marine environment. They’re known as “ecosystem engineers” - organisms that directly or indirectly control the availability of resources, such as food and shelter, to other species. They do this mainly by changing the physical characteristics of habitats, for example, by creating and maintaining burrows, which can benefit other species.

Echiurans also have a variety of symbiotic animals, including crustaceans and bivalve molluscs, residing in their burrows. This means both animals have a mutually beneficial relationship. In fact, animals from at least eight different animal groups associate with echiuran burrows or rock-inhabiting echiurans — and this is probably an underestimate. 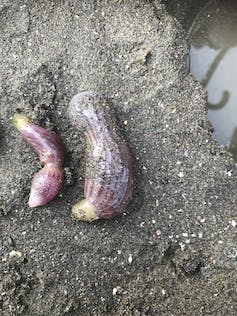 There are an estimated 236 species of penis worm. Rogerl Josh/iNaturalist, CC BY-NC

They’re beneficial for humans, too. Their burrowing and feeding habits aerate and rework sediments. Off the Californian coastline, for example, scientists noted how these activities reduced the impacts of wastewater on the seabed.

And they’re an important part of the diet of fish, including deepwater sharks such as the houndsharks, and species of commercial significance such as Alaskan plaice. Some mammals feast on them, too, such as the Pacific walrus in the Bering Sea, and the southern sea otter. In Queensland they also contribute to the diet of the critically endangered eastern curlew.

And many people eat them in East and Southeast Asia, where they’re chopped up and eaten raw, or used as a fermented product called gaebul-jeot. They (allegedly) taste slightly salty with sweet undertones. 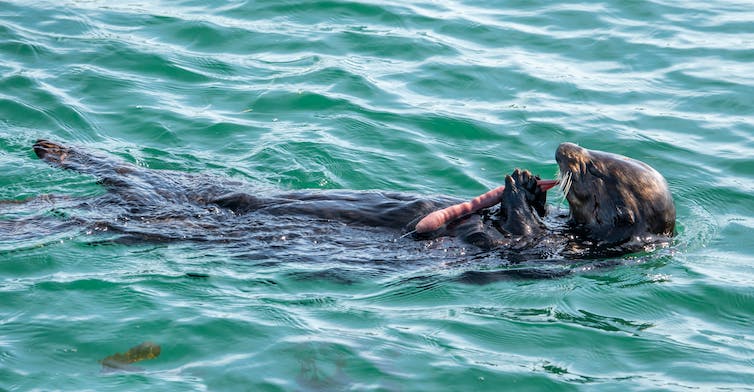 A southern sea otter snacking on a penis worm. Shutterstock

In Australia there is very little known about the biology and ecological roles of our echiuran fauna. This can also be said of many of Australia’s soft sediment marine invertebrates — the unloved billions.

We simply do not understand the population dynamics of even the large and relatively common echiuran species, and the human processes that threaten them. Given their role as ecosystem engineers, impacts to echiuran populations can flow on to other components of the seabed fauna, imperilling entire ecosystems. 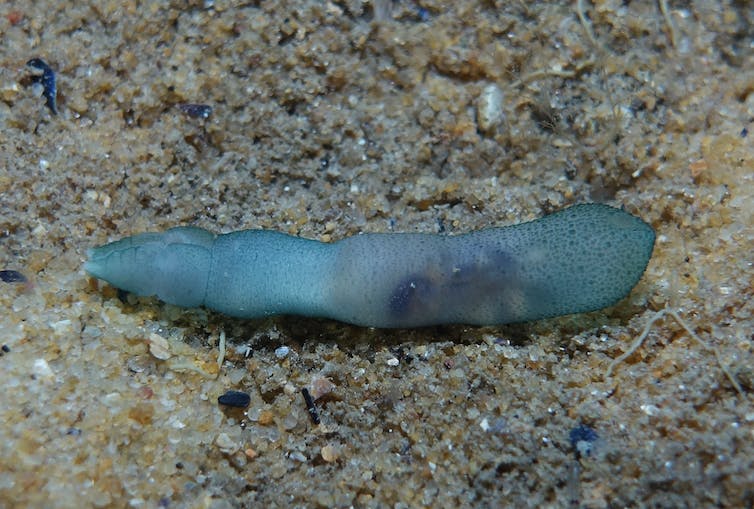 Not all species are a fleshy pink colour. Wayne Martin/iNaturalist, CC BY-NC

We can, in general terms, predict that populations have suffered from the cumulative effects of urbanisation and coastal development. This includes loss and modification of habitats, and changes to water quality.

Populations may also be harmed by undersea seismic activities used in oil and gas exploration, but this is still poorly understood. Until recently, scientists knew only of the threats seismic activity posed to the hearing of whales and dolphins. It’s becoming clearer they can also affect the planet’s vital invertebrate species. 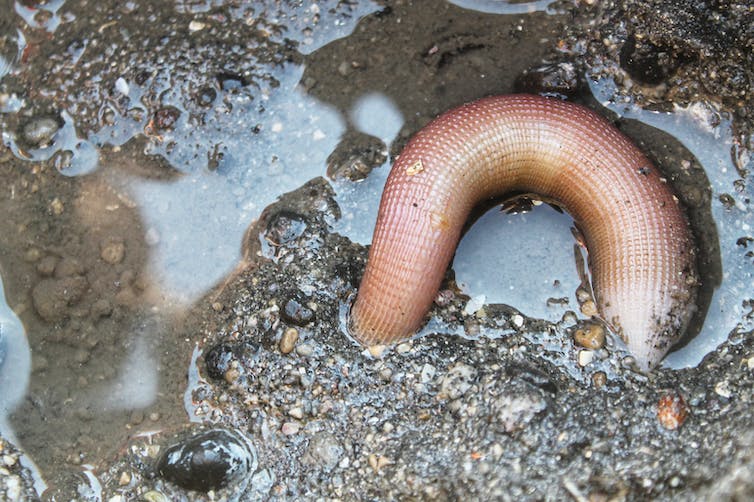 You may have spotted penis worms along the seashore. Shutterstock

It is a dilemma for marine conservation when so little is known about a species that impacts cannot be reliably predicted, and where there is little or no impetus to improve this knowledge base.

We cannot simply presume an animal does not play an important role in an ecosystem because it lacks charisma.

In George Orwell’s novel Animal Farm, it was said “All animals are equal but some animals are more equal than others”. This remains abundantly true in terms of how humans view animals. But we must move away from this philosophy if we are to conserve and restore the planet’s fragile ecosystems.

Read more: Meet the broad-toothed rat: a chubby-cheeked and inquisitive Australian rodent that needs our help