How rare is our Solar System? In the 30 years or so since planets were first discovered orbiting stars other than our Sun, we have found that planetary systems are common in the Galaxy. However, many of them are quite different from the Solar System we know.

The planets in our Solar System revolve around the Sun in stable and almost circular paths, which suggests the orbits have not changed much since the planets first formed. But many planetary systems orbiting around other stars have suffered from a very chaotic past.

The relatively calm history of our Solar System has favoured the flourishing of life here on Earth. In the search for alien worlds that may contain life, we can narrow down the targets if we have a way to identify systems that have had similarly peaceful pasts.

Our international team of astronomers has tackled this issue in research published in Nature Astronomy. We found that between 20% and 35% of Sun-like stars eat their own planets, with the most likely figure being 27%.

This suggests at least a quarter of planetary systems orbiting stars similar to the Sun have had a very chaotic and dynamic past.

Astronomers have seen several exoplanetary systems in which large or medium-sized planets have moved around significantly. The gravity of these migrating planets may also have perturbed the paths of the other planets or even pushed them into unstable orbits.

In most of these very dynamic systems, it is also likely some of the planets have fallen into the host star. However, we didn’t know how common these chaotic systems are relative to quieter systems like ours, whose orderly architecture has favoured the flourishing of life on Earth. 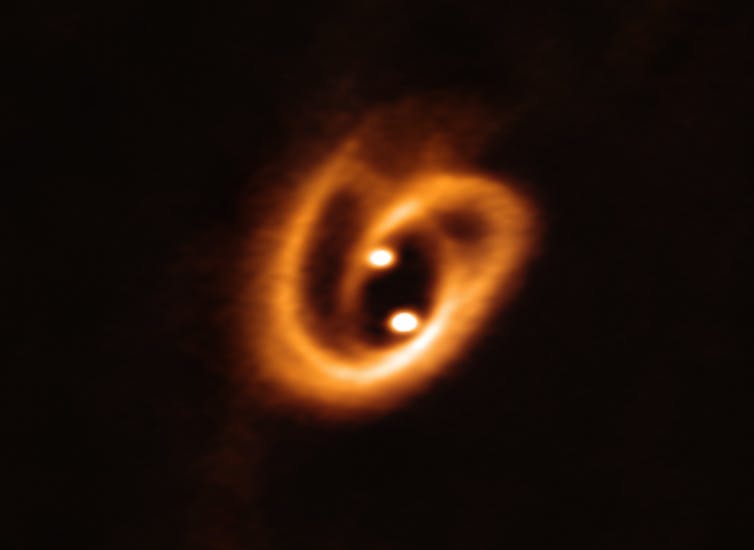 Binary stars form at the same time from a single cloud of gas, so they usually contain exactly the same mix of elements. ALMA (ESO/NAOJ/NRAO), Alves et al.

Even with the most precise astronomical instruments available, it would be very hard to work this out by directly studying exoplanetary systems. Instead, we analysed the chemical composition of stars in binary systems.

Binary systems are made up of two stars in orbit around one another. The two stars generally formed at the same time from the same gas, so we expect they should contain the same mix of elements.

However, if a planet falls into one of the two stars, it is dissolved in the star’s outer layer. This can modify the chemical composition of the star, which means we see more of the elements that form rocky planets – such as iron – than we otherwise would.

We inspected the chemical makeup of 107 binary systems composed of Sun-like stars by analysing the spectrum of light they produce. From this, we established how many of stars contained more planetary material than their companion star.

We also found three things that add up to unambiguous evidence that the chemical differences observed among binary pairs were caused by eating planets.

First, we found that stars with a thinner outer layer have a higher probability of being richer in iron than their companion. This is consistent with planet-eating, as when planetary material is diluted in a thinner out layer it makes a bigger change to the layer’s chemical composition.

Second, stars richer in iron and other rocky-planet elements also contain more lithium than their companions. Lithium is quickly destroyed in stars, while it is conserved in planets. So an anomalously high level of lithium in a star must have arrived after the star formed, which fits with the idea that the lithium was carried by a planet until it was eaten by the star.

Third, the stars containing more iron than their companion also contain more than similar stars in the Galaxy. However, the same stars have standard abundances of carbon, which is a volatile element and for that reason is not carried by rocks. Therefore these stars have been chemically enriched by rocks, from planets or planetary material.

These results represent a breakthrough for stellar astrophysics and exoplanet exploration. Not only have we found that eating planets can change the chemical composition of Sun-like stars, but also that a significant fraction of their planetary systems underwent a very dynamical past, unlike our solar system.

Finally, our study opens the possibility of using chemical analysis to identify stars that are more likely to host true analogues of our calm solar system.

There are millions of relatively nearby stars similar to the Sun. Without a method to identify the most promising targets, the search for Earth 2.0 will be like the search for the proverbial needle in a haystack.