When people arrived in Australia more than 65,000 years ago, they landed on shores that are now deep under water. The first footprints on this continent took place on these now-submerged landscapes.

More than 2 million square kilometres of Australia’s continental landmass — an area larger than Queensland — was drowned by sea-level rise over the last 20,000 years. This land was once home to thousands of generations of Indigenous peoples.

Read more: Australia's coastal living is at risk from sea level rise, but it's happened before

Despite the scale of this vast drowned cultural landscape, Australia has fallen behind international best practice in locating, recording and protecting submerged Indigenous cultural places. 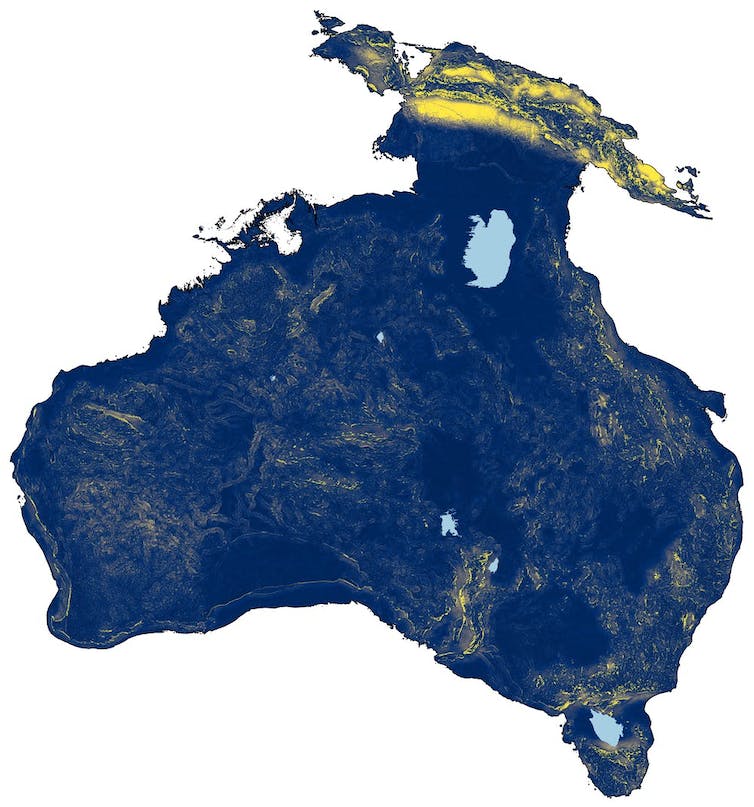 This is what Australia looked like for most of human history, complete with massive lakes in what is now the Gulf of Carpentaria and Bass Strait (Image: S. Ulm)

Last year, our team reported the discovery of nearly 300 stone artefacts submerged on the continental shelf off northwestern Australia.

This discovery demonstrated that submerged Indigenous sites are likely to exist around the continent, but remain unknown due to a lack of investigation.

Read more: In a first discovery of its kind, researchers have uncovered an ancient Aboriginal archaeological site preserved on the seabed

The big picture and the local scale

Through a two-pronged approach at both the local and regional level, we review big data to predict the location of sites. We also put boots on the ground and divers in the water to find and record them.

At the local level, our research at Murujuga in northwest Australia indicates we must combine archaeological data from above and below the water to understand the past landscape at periods of lower sea level.

Drawing on evidence from across terrestrial, coastal and submerged environments, we found archaeological material in all three zones. 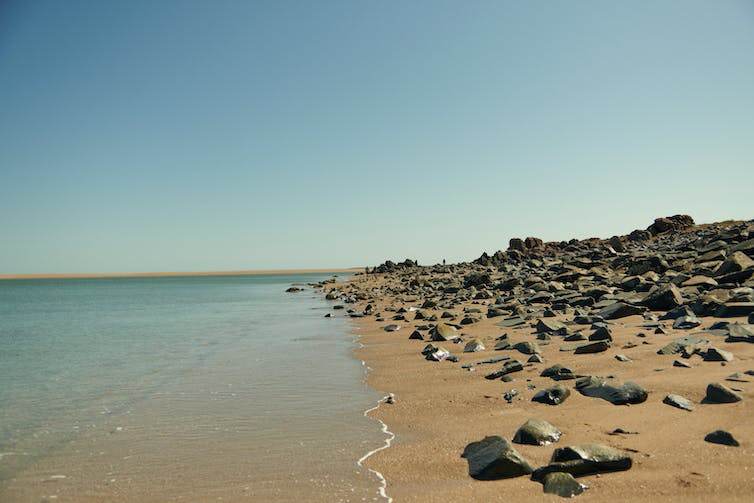 The interface between land and sea. The intertidal zone of today used to be dry land (Photo: S. Wright) 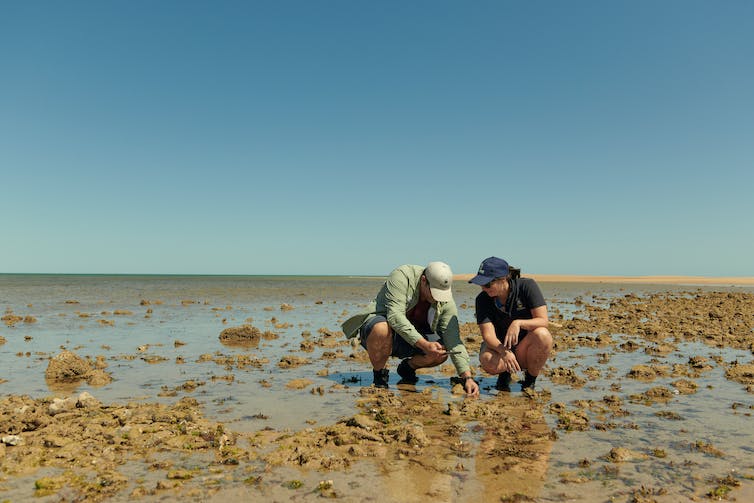 At the regional scale, our study shows how research into submerged landscapes can be expanded across Australia. Taking the Northern Territory as a case study, we assessed the potential for archaeological material to be preserved on the seabed.

National environmental frameworks, such as Marine bioregional plans for Australia’s seabed focus largely on marine biodiversity and habitats, only acknowledging archaeology through a selection of historic shipwrecks.

With few regional or state-level mechanisms in place to inform marine management planning, Indigenous underwater cultural heritage has been ignored or marginalised. There is now an opportunity and an ethical obligation to integrate Indigenous perspectives and traditional knowledge into marine science research. 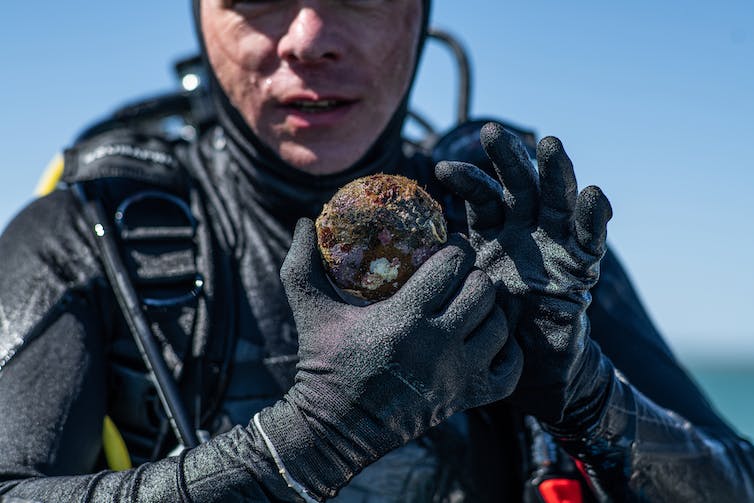 Indigenous underwater cultural heritage is threatened by a variety of activities, including dredging, offshore cables and pipelines, seabed mining, and oil and gas exploration.

Such developments can cause significant damage and even explosions and fires in the sea, as witnessed recently in the Gulf of Mexico.

We can expect increased pressure on coastal and submerged sites with the increasing impacts of climate change. Without mechanisms to consider the archaeology in the intertidal zone of Australia (the transitional area between land and sea) and the seabed, such disturbances will occur out of sight and out of mind. 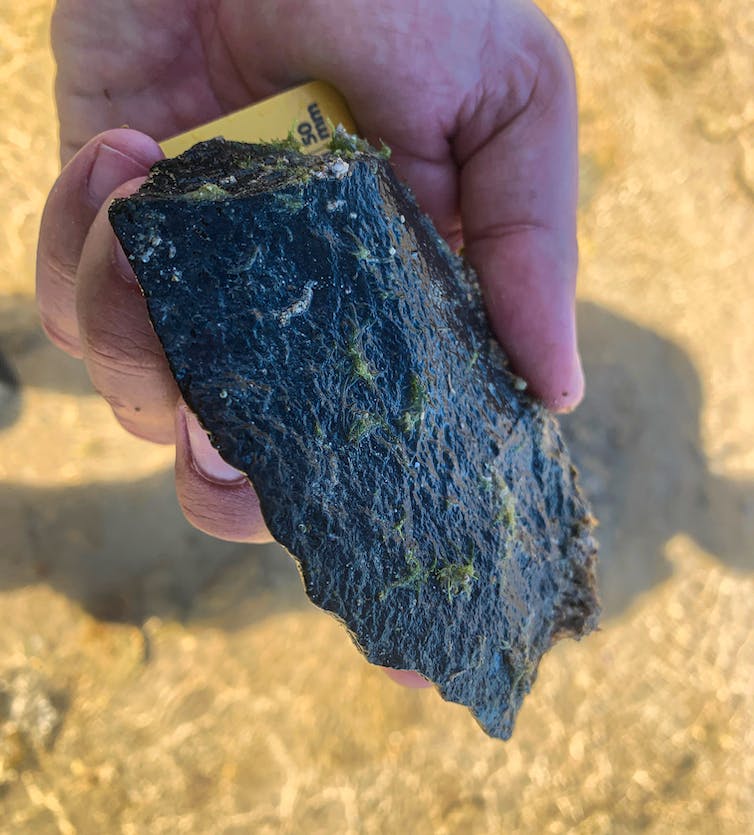 This stone cutting tool with a serrated edge was found in the intertidal zone (Photo: J. Benjamin)

The UNESCO Convention on the Protection of the Underwater Cultural Heritage protects all heritage greater than 100 years old, including both colonial-era sites and Indigenous underwater cultural heritage. But Australia’s national policy currently does not align with the convention.

Our systems must change

Industry has begun to respond. One company, Woodside Energy, for example, has acknowledged the importance of this issue, and has engaged with the Murujuga Aboriginal Corporation. The company says it has

sought to understand the potential heritage values of the submerged cultural landscape for the proposed Scarborough pipeline. 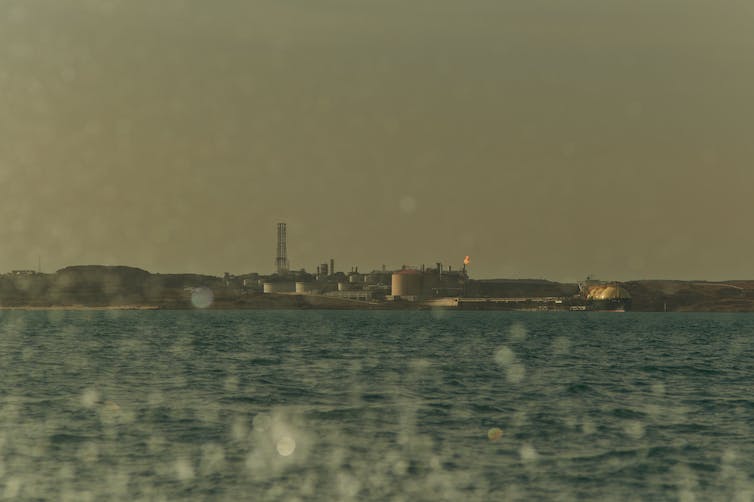 Industry has begun to acknowledge the significance of Sea Country and the industrial impacts on drowned Indigenous cultural heritage (Photo: S. Wright)

This is a new paradigm for the offshore sector in Australia and a sign of things to come as industry and policy-makers respond to scientific advances and new knowledge.

Coastal peoples all over the world have made a significant contribution to human history. Only through underwater archaeology can we fully understand these past peoples who called coastal environments their home. 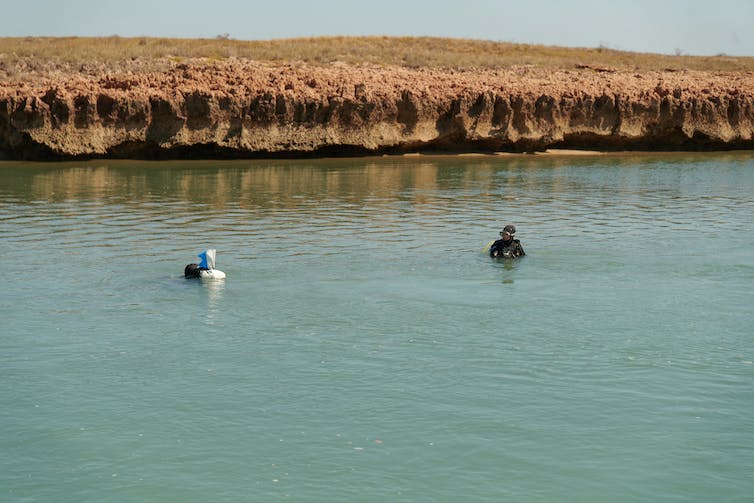