Our writers nominate the TV series keeping them entertained during a time of COVID.

As a child my reading tastes were precocious but old fashioned. For instance, I was reading H. G. Wells’ 1898 speculative novel The War of the Worlds around 1960 as a ten-year-old, thrilling to its proposition that our civilisation could collapse at any moment, and the cold reaches of space might deliver to us an intelligent but ruthlessly murderous life form.

Although he was called the English Jules Verne (another childhood favourite), Wells claimed what he wrote was not science fiction, and thus not intended to carry “scientific” predictions about the world. He considered his works to be fantasies, aiming to achieve “the same amount of conviction as one gets in a good gripping dream”. The moment a reader closed one of his books, he hoped, they would wake up to its impossibility. 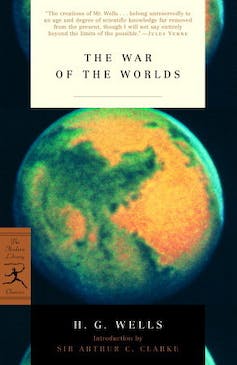 goodreads In Wells’ book, the creatures that arrive in screw-top cylinders from space have somehow targeted the fields and forests surrounding London. Though slug-like, with no obvious limbs or fingers, they begin building the enormous, long-legged metal war machines we are familiar with from film versions of his tale. The machines lay waste to the countryside using “death rays”. For sustenance, these shockingly ugly, intelligent slugs consume the blood of humans by injecting it directly into their own veins. They have evolved beyond needing a digestive tract. Aliens indeed. If they had had digestive tracts, they would have already been hosts to many bacteria, perhaps able to resist our human and animal bacterial fauna. But in Wells’ book, viral and bacterial life on our planet quickly infects the aliens, saving us. It was a case of cosmic luck. There hasn’t been much cosmic luck around for us for a couple of years now. We seem to have come to near-defeat by, as a recent ex-President of the United States called it, “an invisible enemy”. Read more: Think of it this way: at least you're not locked down with drunken, misanthropic bookshop owner Bernard Black In Melbourne, under wave after wave of viral attack, we have, most of us, had to adapt to long stretches of life in lockdown — working hard to remember what day it is, and when the bins go out, and how many cans of tomatoes we should have stacked in the pantry, and how many new cases of COVID were announced today, and who is and isn’t vaccinated among our friends, and whether my headache in the morning means I should go and get tested or I should stop bingeing on Netflix, SBS and ABC dramas. When a new version of War of the Worlds arrived on SBS, I was keen to relive that remembered childhood thrill, and relieved to find another series that might distract me from the overwhelmingly little that happens in my life now. I can report that this drama, created by Howard Overman and starring Gabriel Byrne, Léa Drucker and Daisy Edgar Jones, will chew up many hours satisfactorily. Its first season is strangely well constructed, for the human dramas that unfold through its eight episodes are as intricate and real as any you would want to watch. There is drug-taking, child abuse, sibling rivalry, murder, quests to recover lost love, clumsy new romances, desperate jealousy, the unsparing, heart-wrenching devotion of a mother for her doomed child, and a touch of the mystical when a blind girl begins to see. Byrne, as Bill Ward, finds himself playing a jealous, failing ex-husband, an inadequate father, and a scientist who holds a possible key to the viral strategy that just might turn the tables on the aliens. He looks less than comfortable performing some of the murderous acts he must see through. 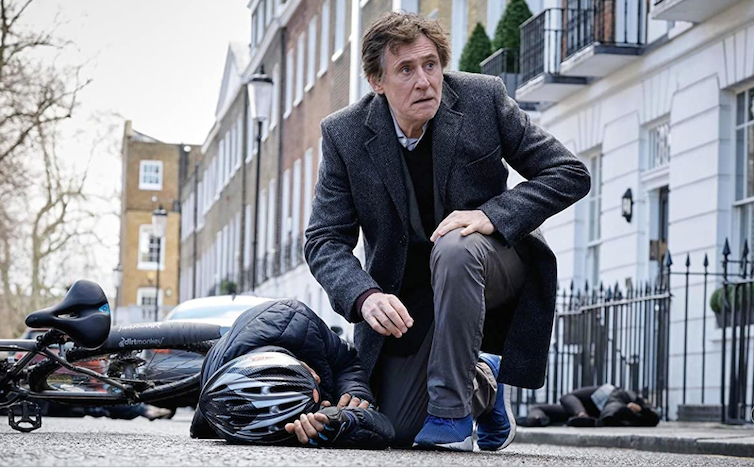 Gabriel Byrne as Bill Ward. AGC Television, Canal+ De Wereldvrede (in association with) Urban Myth Films It is a bit like your favourite grandfather looking at you kindly while he plots your death at his hands. He is so convincingly good, he must be doing this for your good. Edgar-Jones plays her ethereal role as a barely human presence, but a presence that’s nevertheless heavy with complex and contradictory emotions, more than most teenagers emerging into adulthood should have to face. 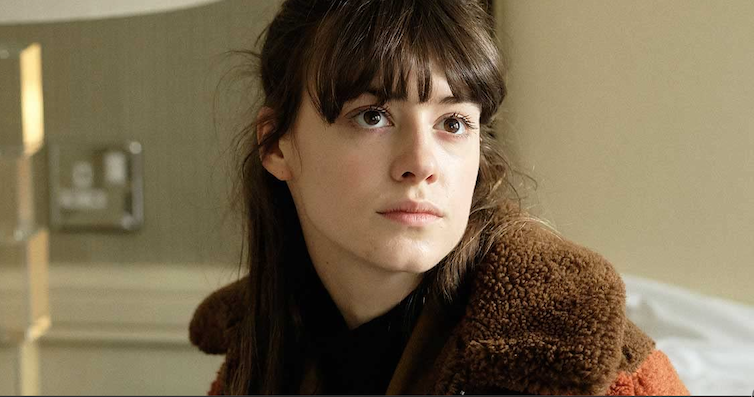 Daisy Edgar-Jones: a barely human presence. AGC Television, Canal+ De Wereldvrede (in association with) Urban Myth Films This focus upon people’s stories is as it must be if a fantasy is to take us along with it, for fantasy must be grounded in character, in ethical dilemmas, and in ordinary human encounters. Even Mary Shelley’s Frankenstein needed its creature to have its own humanly raw, needy, believable feelings if we were to allow it in to our reading-world of reverie, dreams and nightmares. Read more: Connecting with Frankenstein: Modern Monsters and Belonging But the fantasy, too, must take us into the impossibilities of its dream logic. In this latest version of Wells’ book, the aliens’ war-machines are swarms of mechanical, dog-like, attack-robots. They are compelling figures of extreme threat. Only the metallic squeaking of their badly oiled limbs reminds us they are still mere machines.

The aliens: mechanical, dog-like attack robots. AGC Television, Canal+ De Wereldvrede (in association with) Urban Myth Films This extended version of the story is more layered, more intimate, and more satisfying than Wells managed. In his novella, a society of well ordered English lives is shattered for a brief time then rescued by luck. In this three-season series, the contemporary touch allows for the fact that many of the characters in this world already live fractured lives, some desperately lost, betrayed or disillusioned; some hanging on to values that will prove too limited once common order collapses. 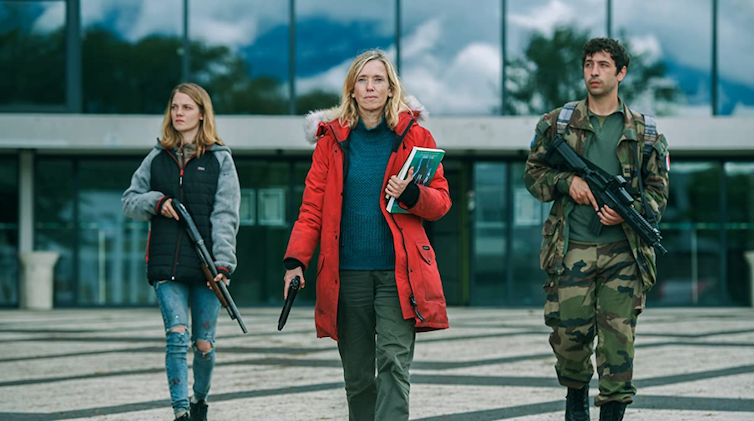 Léa Drucker, Emilie de Preissac, and Paul Gorostidi in War of the Worlds. AGC Television, Canal+ De Wereldvrede (in association with) Urban Myth Films These characters, already at war with themselves or with those they love, can’t claim a perfectly satisfactory world is being destroyed. In this, the new War of the Worlds shares the deeply troubling question at the heart of Liu Cixin’s enormously popular alien-invasion-epic, The Three-Body Problem: what is it we would be fighting for if our planet was threatened? At home, meanwhile, we are setting out on the second season of War of the Worlds, and with Melbourne’s lockdown in place until at least the end of September, we have a trajectory to follow that might make it feel for a while that every day isn’t quite the same. War of the Worlds is showing on SBS.