Our writers nominate the TV series keeping them entertained during a time of COVID.

Those who, like us, grew up gay in the era before narrow-cast television have long been attuned to the queerness of those supporting characters who exist just beyond the limelight.

Less tied than the leads to the heteronormative story arc underpinning most generic product, these peripheral figures have assisted and thwarted straight romance since Hollywood passed its classic three-act narrative structure to broadcast television.

Think of Agnes Moorehead’s Endora, the witchy mother-in-law relentlessly undermining Samantha’s marriage to mere-mortal Darren in season after season of Bewitched (1964-72), or Nancy Jane Kulp’s Miss Jane Hathaway, the bird-watching spinster who made 246 episodes of The Beverly Hillbillies queerly watchable. 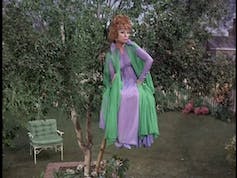 Long before there were openly queer characters on television, characters like Bewitched’s Endora were read as queer. IMDB

Abetted by the popularisation of cable television, in the 1990s, gay characters left the sidelines for centre stage. But, even then, queer sidekicks kept up a running commentary on the absurdity of human sexual behaviour. Often, these wayward characters were more memorable than the leads they ostensibly supported.

Like many, we have been seeking reliable distraction to see us through the charmless experience of lockdown. This is less a matter of relieving tedium than of ensuring the everyday calibrations of novelty that make coupled living — and now also working together — fun.

We continue to watch TV as if it were only available on schedule. We restrainedly dole out one or two episodes of carefully curated series per evening, an anti-binge practice (much like our alcohol consumption — or so we maintain to our GPs) in keeping with the demands of our professional lives.

Recently, we found ourselves turning to Master of None, the Aziz Ansari vehicle that marked his transition from ethnic supporting character in Parks and Recreation to post-romantic lead and showrunner in an observational comedy built around his character, Dev Shah.

A first-generation, South Asian actor-foodie living among his kind in Greenpoint, Brooklyn, Dev is impeccably turned out and ahead of the hipster curve. Yet he lacks social radar, particularly in relation to gender and sexual rapprochement of any kind, which is largely what the program is about.

Citing cinematic masterpieces and multi-camera sitcom classics with equal reverence, Master of None’s blend of satirical send-up and earnest search for romance makes for interestingly uncomfortable viewing. We are often unsure whether we should be invested in getting Dev and his love-object together, or in keeping them apart.

Again and again, the romantic scenarios on screen register as sexually off, even as they drive the normative rom-com plot onwards. Throughout season one (2015) and two (2017), Dev’s romantic adventures are abetted by his male wingman, Arnold (Eric Wareheim), a Jewish guy as tall and bulky as Dev is small. The role of cynical observer is ceded to his equally oversized butch Black friend, Denise (Lena Waithe). 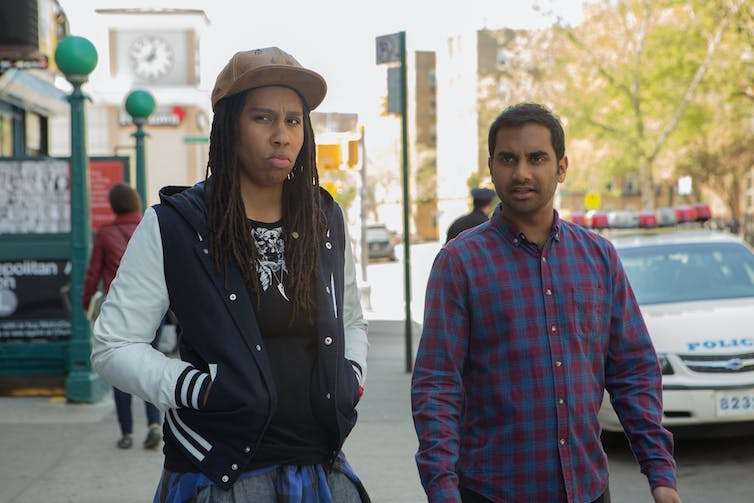 Waite steals every scene she is in. K.C. Bailey/Netflix

Playing a classic queer supporting character with her low-key, almost affectless presentation, Waithe steals every scene she is in, however few her lines. No surprise then, that after the long hiatus brought about by the well-publicised sexual misconduct allegation against Ansari, he and fellow creator Alan Yang relaunched the series in 2021 by focusing almost exclusively on Waithe’s character.

Completely surprising, however, was the format itself. Titled Moments in Love, season three of Master of None pays homage to Ingmar Bergman’s landmark 1973 television miniseries, Scenes from a Marriage.

Bergman’s observational drama followed the breakdown of an established marriage in the wake of an affair, which barely commands screen time. The real interest is in how the original and irretrievably broken coupling nonetheless persists across the advent of new partnerships and the passing of time.

When it first screened, the six episodes of Bergman’s series were said to have emptied the streets of Stockholm and raised divorce rates in Europe as previously shtum couples learned to express their feelings. (A HBO reboot of this series is about to drop. Husbands and wives, be warned.)

In Master of None’s third season, this Bergmanian story plays around Denise. Since season two, she has socially overtaken Dev by publishing an award-winning book and securing a massive advance for a second (a story arc belonging to Ansari in real life).

This financial windfall has enabled her to purchase a colonial-era cottage in upstate New York, which is where, in the season opener, we find her and her girlfriend, Alicia (played by British actor Naomi Ackie), an interior designer specialising in Black antiques and art. 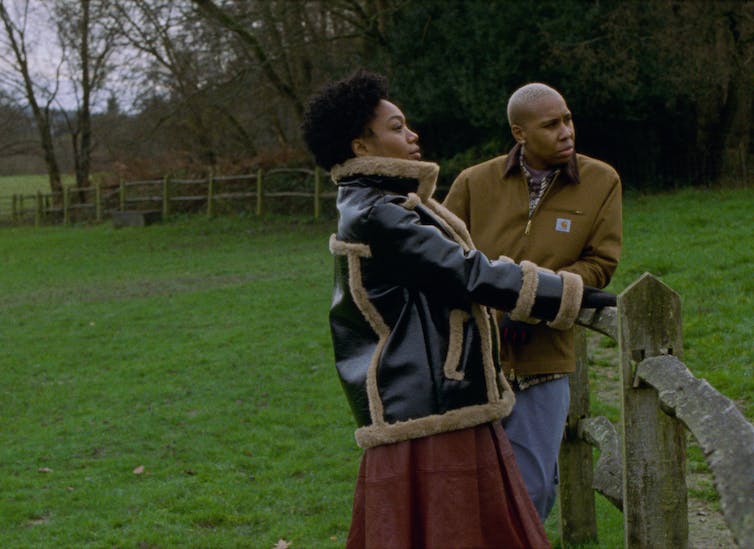 We meet Denise and Alicia in up-state New York. Netflix

Across five “chapters” varying in length from 55 to 20 minutes, all co-written with Waithe, we simultaneously dwell in and fast forward through Denise and Alicia’s relationship. From the honeymoon period, through emotional and career tensions, the things that lesbians go through to have babies with and without each other, and finally, years later (when both have other wives), to a sexual reunion on the down-low in the same cottage, now rented out via AirBnB from a straight couple with poor taste in furnishings.

Across the series, everything from storyline to mise-en-scène gets the Bergman treatment, including the frame itself: no longer the letterboxed format of television circa 2020, but the squarer 4:3 aspect ratio of the 1970s, the decade of our media adolescence.

This boxy retro format captures the boundedness of relationships and situations to which there seems no outside or alternative. The camera is static. Characters wander into shots that seem to anticipate them. Dialogue is measured in pauses not beats. 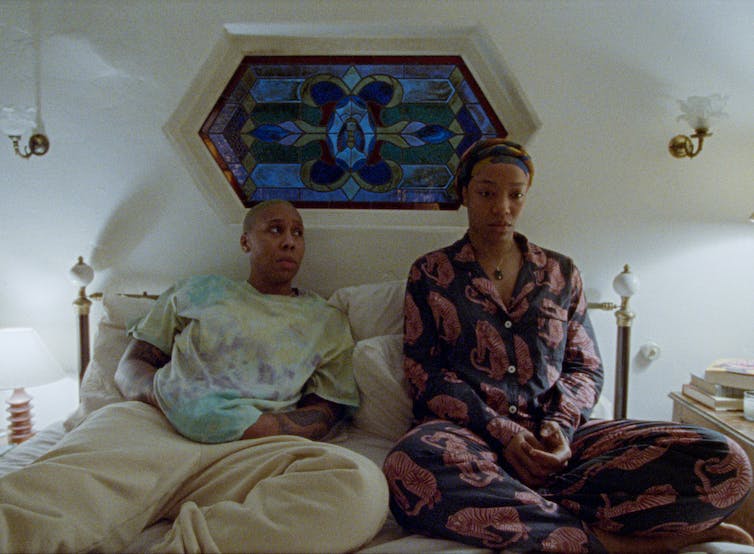 We simultaneously dwell in and fast forward through Denise and Alicia’s relationship. Netflix

Unlike the earlier seasons, in which Dev’s Woody Allenish romantic tribulations play out across Italy and New York, the third season was filmed in the UK during lockdown.

Created on a sound stage, the make-believe cottage captures the emotional feel of domestic life in the pandemic, when the dimensions of your dwelling assert spatial and temporal pre-eminence over life as it used to be lived.

Master of None is available to screen on Netflix.

Authors: Annamarie Jagose, Executive Dean of the Faculty of Arts and Social Sciences and Pro-Vice-Chancellor, University Schools, University of Sydney